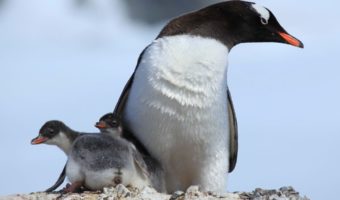 The Gentoo Penguins are the fastest underwater swimming bird, reaching speeds of 36 kilometres per hour (22.3 miles per hour). Gentoo Penguins nest in large and noisy breeding colonies adjacent to sandy or shingle beaches at over 80 locations around the Falkland Islands. There are about 300,000 breeding pairs on the islands.

The Gentoo Penguin is easily recognised by the wide white stripe that goes across the tops of their heads from one eye to the other. Gentoo Penguins have a very bright orange beak. Chicks have grey backs with white fronts. Adult Gentoo Penguins reach a height of 75 to 90 centimetres. Gentoo penguins are the largest members of the stiff-tailed family. 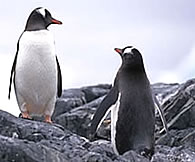 Gentoo penguins are opportunistic feeders and around the Falklands are known to take roughly equal proportions of fish, crustaceans and squid. Gentoo Penguins live mainly on crustaceans such as krill, with fish making up only about 15% of the diet.

Adult Gentoo Penguins only venture about 24 kilometres (15 miles) from the colony in search of food for their chicks. On average they dive deeper than Chinstrap penguins and Adelie penguins to avoid competition. Unlike other penguins, such as Adelies, Gentoo Penguins can lay a replacement clutch of eggs if they lose the original clutch.

In September or October, Gentoo Penguins generally lay two eggs three days apart from each other. The second egg is often smaller than the first. Both eggs are then guarded zealously by the parents until they hatch about 5 weeks later.

Chick survival is often dependent on the availability of food and the lack of predators. If food is in short supply the parents will preferentially feed the stronger of the two chicks sacrificing the weaker one.

The chicks stay in the nest for about a month at which time they form nursery groups or ‘creches’, while their parents hunt for food. After about 3 months (usually in January) the chicks grow their adult feathers and are able to head out on their own.

Gentoo penguin eggs are taken by skuas (seabirds in the family Stercorariidae). Young penguins are preyed upon by sheathbills, caracaras (falcons), kelp gulls, giant petrels and feral cats, while older birds are taken by leopard seals. Nests are often flattened by indifferent elephant seals as they move about the colonies.

There are estimated to be over 250,000 pairs of gentoo penguins and they are listed as Lower Risk – Near Threatened by the 2000 IUCN Red List.