You are here: Home / Animals / Gharial 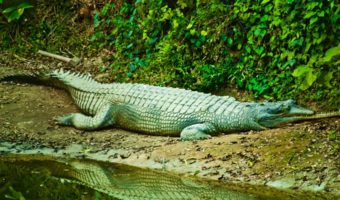 The Gharial (Gavialis Gangeticus) is one of two surviving members of the family Gavialidae, a long-established group of crocodile-like reptiles with long, narrow jaws. The Gharial (sometimes called the ‘Indian gharial’ or ‘gavial’) is the second-longest of all living crocodilians.

Gharials are most adapted to the calmer areas in the deep fast moving rivers. The physical attributes of the gharial do not make it very suited for moving about on land. In fact the only reasons the gharial leaves the water is to either bask in the sun or to nest on the sandbanks of the rivers. 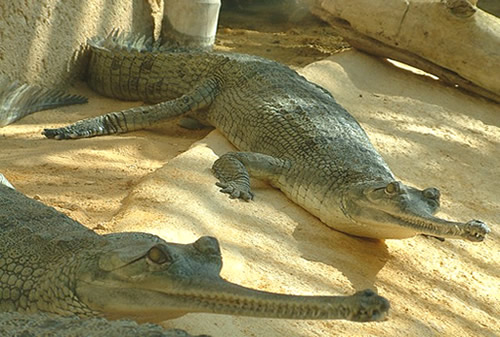 Gharials have elongated, narrow snouts that are similar only to its relative, the False gharial, (Tomistoma schlegelii). The snout shape varies with the age of the Gharial. The snout becomes progressively thinner the older the gharial gets. The bulbous growth on the tip of the males snout is called a ‘ghara’ (after the Indian word meaning ‘pot’), only present in mature individuals.

The bulbous growth is used for various activities, it is used to generate an echoing ‘hum’ during vocalization, it acts as a visual lure for attracting females and it is also used to make bubbles which have been associated with the mating rituals of the species.

Gharials elongated jaws are lined with many interlocking, razor-sharp teeth, an adaptation to the diet (predominantly fish in adults). Being one of the largest of all crocodilian species, approaching the size of the Saltwater crocodile (Crocodylus porosus) and the Nile crocodile in maximum size, the males reach at least 5 – 6 metres in length. Reports of 7 metre gharials exist, but are unconfirmed.

The leg muscular system of the gharial is not suited to enable the animal to raise the body off the ground (on land) in order to achieve the high-walk gait, being able only to push its body forward across the ground in a movement called ‘body sliding’.

Although the gharial can do this with some speed when required, when in water, the gharial is the most nimble and quickest of all the crocodiles in the world. Their tail seems overdeveloped and is laterally flattened, more so than other crocodiles, this enables it to achieve the excellent water locomotive abilities.

The young gharials prey primarily on small invertebrates such as insects, larvae and also small frogs. The mature adults feed almost solely on fish. The gharials characteristic long narrow snouts have very little resistance to water allowing swiping motions to snap up fish in their mouths.

The gharials numerous needle-like teeth are perfect for holding on to struggling, slippery fish. Although primarily fish eaters, some individuals have been known to scavenge dead animals. The gharial is not thought to be a man-eater. Despite its immense size, its jaws make it physically incapable of devouring any large mammal, including a human being.

The gharials mating season is during November through to December and well into January. The nesting and laying of eggs takes place in the dry season of March, April and May. This is because during the dry season the rivers shrink slightly and the sandy river banks are available for nesting. Between 30 and 50 eggs are laid into the hole that the female has dug and then it is covered over carefully.

After a gestation period of about 90 days, the juveniles emerge, although there is no record of the female assisting the juveniles into the water after they hatch (probably because their jaws are not suited for carrying the young due to the needle like teeth). However the mother does protect the young in the water for a few days until they learn to fend for themselves.

The life span of the Gharial is not exactly known, however, it is thought to be around the same span as other reptiles being 50 – 60 years in the wild.

Although gharials are not man-eaters, they have been given this reputation for sometimes mostly because of myths:

Gharials appear threatening to the average swimmer or fisherman since they have a similar appearance to Crocodiles.

In many cases, human jewellery has been found in the bellies of dead gharials (this is most likely from scavenging human corpses which are floated down river in the Ganges, or scavenging cremated remains that have been dumped into the Ganges). The gharial also swallows jewellery, stones, sticks and the like to act as ‘gastroliths’ (hard objects that aid in digestion and buoyancy management).

In the 1970s the gharial came to the brink of extinction and even now remains on the severely endangered species list. The conservation efforts of the environmentalists in cooperation with several governments has led to some reduction in the threat of extinction. Some hope lies with the conservation and management programs in place as of 2004.

Full protection was granted in the 1970s in the hope of reducing poaching losses, although these measures were slow to be implemented at first. Now there are 9 protected areas for gharials in India which are linked to both captive breeding and ‘ranching’ operations where eggs collected from the wild are raised in captivity (to reduce mortality due to natural predators) and then released back into the wild (the first being released in 1981).

More than 3000 animals have been released through these programs and the wild population in India is estimated at around 1500 animals – with perhaps between one and two hundred animals in the remainder of its range.