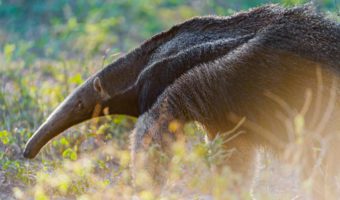 Anteaters belong to the order ‘Pilosa’ which also includes Sloths. The Giant Anteater is the largest of the Anteater species, hence its name. Other Anteater species include the Silky Anteater (Cyclopes didactylus) and the Collared Anteater (Tamandua tetradactyla). Giant Anteaters can be found in forests and savannas throughout Central and South America from Belize to Northern Argentina but are more common in the South.

Anteaters are one of the more stranger-looking animals on our planet. The Giant Anteater can measure up to 2 metres (6.5 feet) in length from nose to tail and weigh 40 – 100 pounds. The Giant Anteaters coat is colored greyish/brown with black and white diagonal markings on their shoulders. Their hair is course on the upper parts but long and shaggy on the under parts and tail.

The Anteaters tail is long and bushy and can measure 2 – 3 feet alone. Their heads are long and narrow with a small black snout on the end. Their eyes and ears are small and they have a very long sticky tongue.

Giant Anteaters have four short, stout legs. Each foot consists of 5 digits with the 3 middle digits on their front paws being equipped with huge, sharp claws which are used for breaking open termite and ant nests. Because they have these long claws on their paws, the anteater has to walk on its knuckles with their claws folded underneath to protect them. Their claws are very strong and this strength is necessary as the termite and ant nests are mixed with soil and termite saliva which become extremely hard when baked in the sun.

Anteaters have no teeth and after scooping out the insects with their long tongues, the anteater crushes them with pad-like growths inside their mouths before swallowing them. Although the Anteaters sight and hearing are not very well developed, they have a superb sense of smell. Giant Anteaters have a rather small brain in comparison to their body size although they have large skulls which can extend up to 18 inches in length.

Giant Anteaters are specialist carnivorous predators of termites and ants. They detect anthills and termite mounds with their acute sense of smell. When they have located their prey, the anteater digs open the nest with its huge, sharp claws. The anteater then inserts its very long tongue into the nest and extracts the insects which are then placed in the digestive system.

The anteater has huge salivary glands that produce large amounts of sticky saliva to the tongue which allows many ants, termites and their eggs to stick to it at one time. The tongues microscopic spine-like protrusions further aid the eating process. Its tongue can extend up to 2 feet in length and can be flicked in and out of the insects nest twice a second. As many as 30,000 – 35,000 ants can be consumed in one day. Anteaters never completely destroy a nest. The insects can repair their damage quickly and the anteater is able to return to the nest to feed again. Anteaters are very careful to avoid the dangerous and aggressive Soldier Ants.

Anteaters are not very vocal animals, however, they will make a ‘bellowing’ sound if alarmed and infants will ‘grunt’ should they fall off their mothers backs.

The gestation period for the female anteater is 6 months after which one infant will be born. Females give birth in a bipedal position (on hind legs) using her tail to support herself. Infants are born with their full fur and markings. The infant is fed from the females mammary glands for around 6 months and it will ride on its mothers back for up to a year even though it is capable of a small, slow gallop. The infant will remain with its mother for up to 2 years or until she becomes pregnant again.

At this stage, the infant will depart from its mother to begin its own life and will reach sexual maturity (being able to breed) at between 2 – 4 years. The life span of an Anteater in the wild is around 14 years and in captivity, around 26 years.

The Giant Anteater is classed as ‘Near Threatened’ by the IUCN. As anteaters are placid creatures they are preyed upon by large cats such as Pumas and Jaguars. However, a cornered anteater will ride up on its hind legs, using its tail for support and use its long claws which are 4 inches long, to fight off the attacker. Anteaters are also hunted in South America for fur and food.

Giant Anteaters are very good swimmers.Giant anteaters also have the lowest metabolic rate of any placental mammal, being recorded at 32.7 degrees Centigrade.