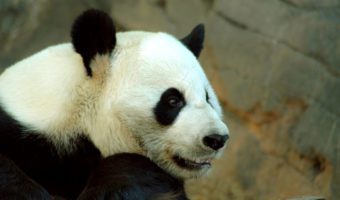 The Giant Panda (black-and-white cat-foot) (Ailuropoda melanoleuca), is a mammal classified in the bear family, Ursidae, native to central-western and southwestern China. Giant Pandas are one of the rarest mammals in the world. Pandas are easily recognized by their large, distinctive black patches around the eyes, over the ears and across their round body.

Giant pandas live in a few mountain ranges in central China, in Sichuan, Shaanxi and Gansu provinces. Pandas once lived in lowland areas, however, farming, forest clearing and other development now restrict giant pandas to the mountains.

The mist shrouded mountain forests of China, have slowly disappeared over the last century. Many of the bamboo areas which are vital for the Pandas diet and survival are being cut down by people who then build farms there. The Giant Panda is an endangered species. According to the latest report, China has 239 giant pandas in captivity (128 of them in Wolong and 67 in Chengdu) and another 27 pandas living outside the country. It also estimated that around 1,590 pandas are living in the wild. 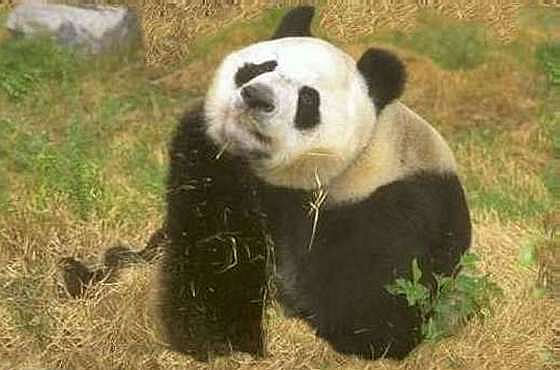 The Giant Panda has a black-and-white coat. Adult pandas measure around 1.5 metres long and around 75 centimetres tall at the shoulder. Males are 10 – 20% larger than females. Male pandas can weigh up to 115 kilograms (253 pounds). Female pandas are generally smaller than males and can occasionally weigh up to 100 kilograms (220 pounds).

The giant panda has a body typical of bears. Pandas have black fur on their ears, eye patches, muzzles, legs and shoulders. The rest of the pandas coat is white. The pandas thick, wooly coat keeps it warm in the cool forests of its habitat.

Giant pandas have large molar teeth and strong jaw muscles for crushing tough bamboo. Many people find these cuddly looking bears to be lovable, however, giant pandas can be as dangerous as any other bear.

Pandas have the largest molars out of all the carnivorous mammals. The forepaws of the panda have an extra ‘thumb’ called an ‘opposable pseudo thumb’ which is used in conjunction with its ‘forefingers’ and enables the panda to grasp even small bamboo shoots with precision.

After the sloth bear, the panda has the longest tail in the bear family measuring 4 – 6 inches long. Giant Pandas can usually live to be 20 – 30 years old in captivity. 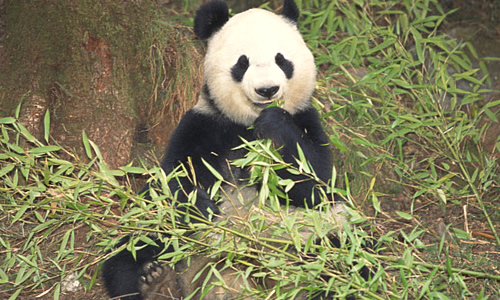 Although Pandas mostly eat bamboo, they are still classed as a carnivore. Pandas have a digestive system of a carnivore, however, they have adapted to a vegetarian diet through their large consumption of bamboo. A Pandas digestive system cannot digest the cellulose in bamboo, that is why they have to eat so much and for long periods of the day.

The average Giant Panda eats as much as 20 to 30 pounds of bamboo shoots a day. Because pandas consume a diet low in nutrition, it is important that they keep their digestive tract full. Pandas may eat other foods such as honey, eggs, fish, yams, shrub leaves, oranges and bananas.

Pandas do not hibernate as they are not able to store enough fat to feed them through the winter on their diet of bamboo.

Pandas are good at climbing trees and they can swim as well. Pandas are difficult to see out in the wild as they live among the thick dense bamboo plants in old-growth forests which is their favourite habitat. Pandas are very solitary creatures and will live alone and will only meet other pandas during mating season. 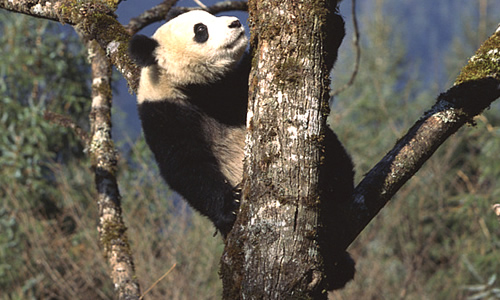 Giant panda bears are silent creatures most of the time, however, they can bleat. Pandas do not roar like other bears, however, they do have 11 different calls, four of which are only used during mating.

The male Giant Pandas home range may overlap with several female territories and when breeding season arrives during the springtime, he will attempt to mate with these local females.

The female Pandas usually announce their readiness to breed by becoming more vocal and leaving special scent marks around to enable the males to track them. The females give birth to their cubs in the Autumn and these stay as constant companions for the next 18 months or more.

Pandas signify aggression by lowering their heads and staring at their opponents. To signal submissiveness, a panda will put its head between its front legs and often hide its eye-patches with its paws. This position is also adopted by females during mating, and by captive animals that are being harassed by humans. At close range, aggression is signaled by a swipe with a paw, or by a low-pitched growl or bark that will send an opponent scampering up the nearest tree.

Giant Pandas have a very slow reproductive rate which sadly contributes towards their decline in numbers. Giant Pandas mate during the springtime. The female panda’s gestation time varies between 112 days and 163 days. After this time, she will give birth to one single cub. On rare occasions, she will produce 2 – 3 cubs, but usually only one will survive.

The female panda can only conceive during a 72 hour estrus period which only happens during the spring breeding period.

The female panda gives birth in the Autumn. Panda cubs are very small, weighing between 3.5 and 6 ounces. They have little fur, are pinkish white in color, blind and very helpless. No other mammal gives birth to such a small baby except marsupials like the kangaroo who keeps her babies in her pouch until they are fully developed. A panda mother will carry her cub around in her arms and care for its every whim constantly. Panda cubs cry just like human babies when they need feeding or need care from their mother.

They will cry for milk about every 2 hours or so. Between feeding times, the mother panda will continuously hold her cub very gently.

This attentive behaviour will continue until the cub is able to move around by itself when the cub is about 3 months old. At this age, the cub will continue to follow its mother around and by 6 months the cub can begin eating bamboo. They are finally weaned off their mothers at around 9 months old. The weaning of the cubs in the spring following their births is an ideal time as the newest most protein-filled bamboo shoots are available.

This gives cubs the best possible start in life on a diet that in the best of conditions is of poor nutritional quality. At about a year old, the cubs can weigh 75 pounds, which is about a third of an adult pandas weight.

Female pandas do not reach sexual maturity until they are 5 to 6 years old. However, even young, inexperienced female pandas display a maternal instinct and know instantly how to care for the young without needing any practice. This is very important because no breeding season is then wasted through ‘clumsy parenting’. Because female pandas start to breed quite late and only rear a single young cub every 2 years, she will only rear in total around 7 offspring in her lifetime.

By the age of 22, a female panda is considered ‘old’ and possibly ‘post-reproductive’. The giant pandas low reproductive rate makes it very difficult for a giant panda population to recover from a decline in numbers.

With many conservation programs in place today, the Panda is desperately trying to be saved from extinction. It would be one of the greatest tragedies within the animal kingdom if this great bear was wiped out completely.

Probably the most major threat to the survival of the Giant Panda Bear is the destruction of their natural habitats, along with increased human population and poaching. The different varieties of bamboo go through periodic die-offs as part of their renewal cycle. Without the ability to move to new areas which have not been affected, starvation and death will certainly occur for the giant panda. Such die-offs of the bamboo also put the giant pandas in more direct contact with farmers and poachers as the bears try to find new areas in which to feed.

The recent announcement that the Chinese government will nearly double protected areas for giant pandas in the Qinling mountain range by creating five new panda reserves and five ‘corridors’ (linking protected regions) is expected to have a major benefit on the future of the panda. Many organizations are continuously supporting and trying to find ways to save and preserve the existence of this special, adorable bear.

While the dragon has historically served as Chinas national emblem, in recent decades the Giant Panda has also served as emblem for the country. The pandas image appears on a large number of modern Chinese commemorative silver, gold and platinum coins.