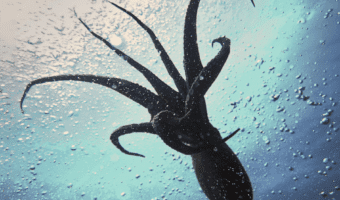 The giant squid (Architeuthis dux) is, as its name suggests, a very large squid that belongs to the family Architeuthidae and the genus Architeuthis. These squid can reach a size of 12 to 13 m (39 to 43 ft) and exhibits deep-sea gigantism, meaning they are extremely large for their surroundings.

The giant squid is widespread and occurs in all the world’s oceans. It is not known exactly how deep these squid live, but it is thought it could be up to 1,000 metres. They are similar in appearance to other squid, with eight arms and two longer tentacles. They are a source of prey for animals such as sperm whales, pilot whales, southern sleeper sharks and killer whales.

The exact population of the giant squid is unknown, mainly because they live so deep. However, it is not thought that they are endangered, and are listed as Least Concern on the IUCN Red List. 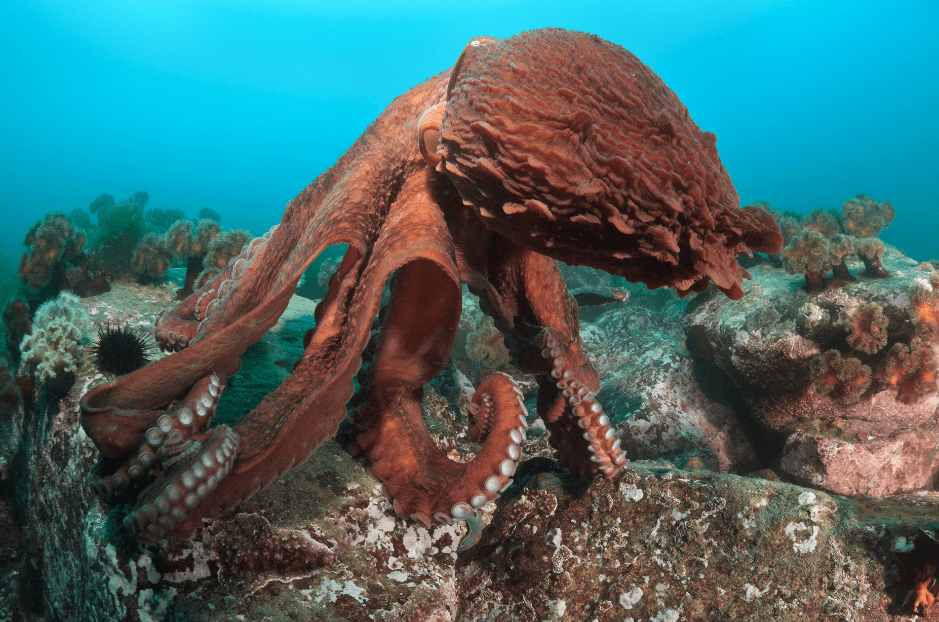 The giant squid is the second largest mollusk, exceeded only by the colossal squid. Like all squid, a giant squid has a mantle (torso), eight arms, and two longer tentacles (the longest known tentacles of any cephalopod). The arms and tentacles account for much of the squid’s great length. Their total length is thought to be at 12 m (39 ft) or 13 m (43 ft) for females and 10 m (33 ft) for males, with the mantle not known to exceed 2.25 m (7 ft 4.6 in).

These animals are sexually dimorphic, with females being larger and heavier than males. Females may weigh up to 275 kg (606 lb) and males may weigh 150 kg (330 lb).

The two tentacles which giant squid possess have many suckers on the tips, called clubs. They also have eight arms with suckers in two longitudinal rows, which measure 2 to 5 cm (0.79 to 1.97 in) in diameter and allow the squid to grab onto their prey. At the end of the arms they have a parrot-like beaks at the base.

Giant squid have small fins at the rear of their mantles used for locomotion. Like other cephalopods, they are propelled by jet. They do this by pulling water into the mantle cavity, and pushing it through the siphon, in gentle, rhythmic pulses. They can also move quickly by expanding the cavity to fill it with water, then contracting muscles to jet water through the siphon. They breathe using two large gills inside the mantle cavity.

Giant squid have the largest eyes of any living creature except the colossal squid. Their eyes measure at least 27 cm (11 in) in diameter, and allow them to see in the deep, dark water. also have dark ink that can be used to deter predators.

The exact lifespan of the giant squid is unknown, but it is thought they live for less than 5 years. It is more likely they live for between one and five years. 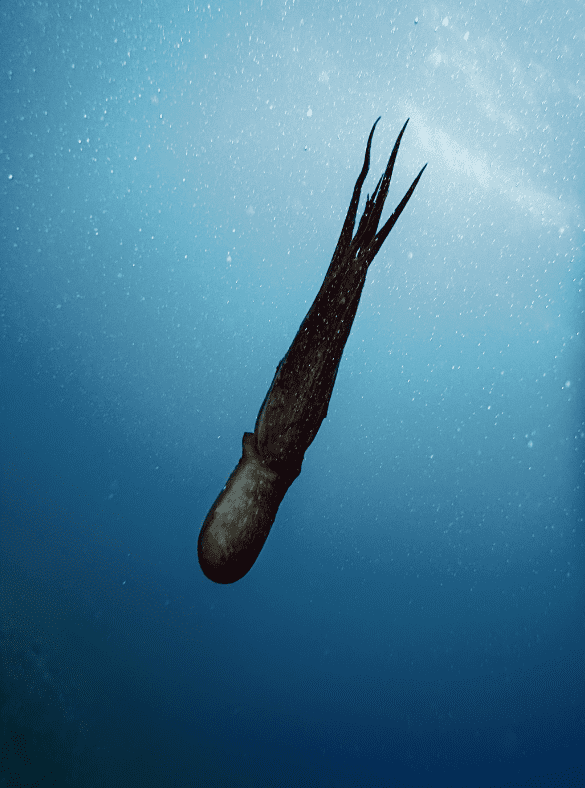 Giant squid prey on other, smaller squid species and fish. They catch their prey by using their two tentacles, gripping it with the serrated sucker rings on the ends. Then they bring it toward their beak, which can bite through just about anything the squid might capture. The squid must shred their food before they eat it, which they do with their radula (their tongue with small, file-like teeth).

Because the giant squid has never been observed in its habitat, it is difficult to know what its behavior is like. It is thought this species is most likely a solitary animal that hunts alone.

These squid are thought to be a solitary species and scientists are unsure how males find females to breed. Again, as their reproductive habits have not been studied, it is difficult to know how they breed.

Most likely, the males place their sperm onto the female squid’s arms, and females may release eggs and hold them as they are fertilized in the water. The female then releases millions of fertilized eggs stuck together as an egg mass.

When the baby squid hatch, they are just 1 to 4 millimeters long. They feed in the upper ocean at depths of about 650 feet (200 m), before moving deeper as they mature. The deeper they are in the water, the less likely they are to be preyed on.

The giant squid is found in all of the world’s oceans. They are most commonly recorded in the North Atlantic and North Pacific, especially around Japan, Newfoundland, Norway, northern British Isles and the oceanic islands of the Azores and Madeira, and near South Africa and New Zealand.

No one knows the exact habitat of the giant squid because they have not been observed there, but it is known they live in the deep sea and thought they might inhabit depths between 200 and 1,000 meters.

Squid do not carry oxygen very well at higher temperatures and so will suffocate in warm water. Warm water will cause a giant squid to rise to the surface and not be able to get back down. Therefore, it is thought the giant squid are probably more likely to be found in cooler water. 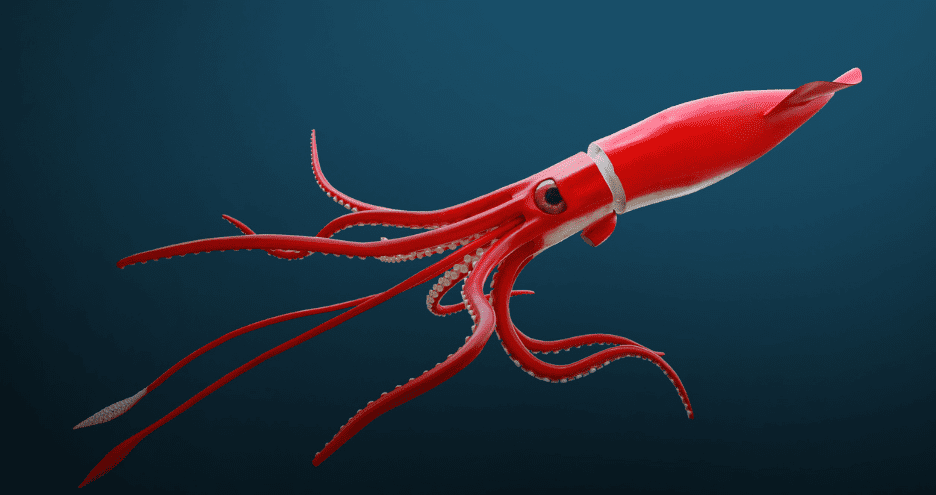 The giant squid is listed as Least Concern on the IUCN Red List and are not thought to be endangered, but their exact number is unknown because they live so deep. However, the depth at which they live could be one of the reasons they are not considered threatened, because they are not as risk from humans and human-inflicted issues that many other sea creatures are subject to.

They are preyed on by sperm whales, pilot whales, southern sleeper sharks and killer whales. Although they have a large size, they are light because their arms and tentacles account for much of their great length, which means they can be taken by these heavy sea mammals. Despite this, they do put up a fight, and sperm whales are often seen with sucker-shaped scars after hunting giant squid.

Juvenile giant squid may fall prey to other large deep sea predators. However, as they grow, they tend to quickly outgrow any potential predators.