You are here: Home / Animals / Goats 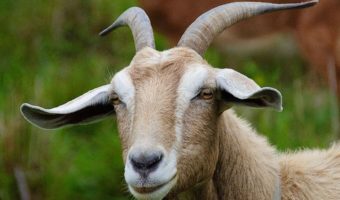 Goats are amazing animals. Goats are tough and versatile and have more uses than you could ever imagine. Goats can survive and thrive just about anywhere. A goat is a hoofed mammal in the genus ‘Capra’. Most goats are referred to as ‘domestic goats which are sub-species of the ‘wild goat’.

Altogether there are nine species of goat in the world, however, the domestic goat is the most common. Goats are ‘bovids’ and are members of the family ‘bovidae‘ and ‘caprins’ which are sub-species of the sub-family ‘caprinae’.

Like cows and giraffes, goats are ruminant animals which means they chew cud. Ruminants have a four-chambered stomach which plays a vital role in digesting, regurgitating and re-digesting their food. Goats are herbivores (plant-eaters) who spend most of the day grazing. Goats eat grass, herbs, tree leaves and other plant material. Goats swallow their food without chewing it much. Later, they regurgitate the food (then called a cud) and chew it thoroughly before swallowing it for the last time.

A male goat is called a buck or billy, and a female is called a doe or nanny. Young goats are called kids.

Just like sheep, goats are considered to be the ‘first domesticated animal’. The domestication process began over 10,000 years ago in a North Iranian town called Sangsar. The initial reasons for domesticating goats was to have easy access to goat hair, meat and milk. Goat skins were also used up until the Middle Ages for making bottles out of to hold water and wine for people who were traveling or camping.

Goats meat and milk is still consumed today and goats milk is becoming ever popular as a healthy alternative to cows milk. Goats milk is easier to digest than cows milk and many call this milk ‘universal milk’ as it can be used to bottle feed most animals.

Goat skin is also still used today to make gloves and other items of clothing. Angora Goats produce mohair which is a fine, soft, lustrous fibre. Pygora Goats produce a cashmere type of fibre. Both mohair and cashmere are used to make jumpers and cardigans and other types of woolen clothing items.

However, not all goats are just used for human provisions. A lot of people keep goats as pets.

Goats have many similarities to sheep. The only main difference between sheep and goats is that goats have shorter tails than sheep and goat horns are longer and grow in a upward, backward and outward direction, while horns on a sheep grow in a twisted spiral shape.

Like sheep, goats enjoy being in a herd. Goats tend to survive better when they are in a herd rather than if they were alone. Every herd has a ‘Herd Queen’, who leads the herd while browsing. Goats are also much more lively than sheep and their inquisitive nature makes them humourous, enjoyable and curious pets.

Goats are extremely curious and intelligent. Goats are easily house trained and you can teach them to pull carts and walk on leads. Goats are also known for escaping their pens. If you have unsecured fencing, be warned your goats will be inquisitive and test it out and soon you will know where the gaps are. Goats are very coordinated and can climb and hold their balance in the most awkward places. Goats are also widely known for their ability to climb trees, although the tree generally has to be at a slight angle.

A goat that has been teased may butt people as part of their ‘play’, which may start as kids, when it is no problem. It can be a problem if this behaviour extends to adult age and size. Hence start correctly: if a small kid pushes against your legs, never push back.

Goats make a bleating sound much like a sheep. All in all, goats make wonderful companions and pets. Goats are a pleasure to keep and give you many hours of fun watching them with their humorous ways. Goats all have very different personalities and different little habits which can be very interesting to observe.

The average milk production of a dairy goat is 6 – 8 pounds per day. However, a high yielding Doe can produce up to 16 pounds of milk per day. Milking machines are sometimes used to extract the milk from the goats, similar to those used on cows at a Dairy Cow Farm. However, some owners of small goat herds prefer to hand milk their goats, usually twice a day.

Goats milk is considered to be very healthy in lots of ways. Goats milk is used to make many dairy items that are both tasty and healthy. These include: pasteurised and unpasteurised milks, cheese, yogurts, cream and butter.

Many people tend to choose goats milk as an alternative from cows milk because goat milk casein and goat milk fat are more easy to digest than cow’s milk. Goat milk is valued for use with the elderly, sick, babies, children and those with a cows milk allergy. It is also a preferred milk used to give to orphan foals, puppies and other animals.

Fat globules are smaller in goats milk than in cows milk and therefore remain dispersed longer giving it a more digestible texture.

Goats milk is higher in Vitamin A, Niacin, Choline and Inositol than cows milk, however, it is lower in Vitamin B6, B12, C and Carotenoids.