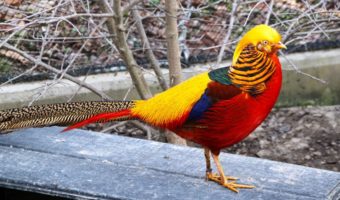 The Golden Pheasant, (Chrysolophus pictus), also known as the ‘Chinese Pheasant’ is one of the more popular species of pheasant which is native to the mountainous forests of Western and Central China.

The Golden Pheasant was introduced to the United Kingdom around 100 years ago and there are around 101 – 118 mating pairs in the summer. This hardy, gamebird belongs to the order: Galliformes and is a smaller species of pheasant.

The Golden Pheasant along with Lady Amherst Pheasant (Chrysolophus amherstiae), make up the group of ‘Ruffed Pheasants’ named for their ruff which is spread across their face and neck during courtship.

Use the information below to find out more about the Golden Pheasant’s characteristics, habitat, diet, behaviour and reproduction.

Male Golden Pheasants can be easily identified by their bright coloring. They have a golden crest tipped with red which extends from the top of their heads, down their necks. They have bright red underparts, dark colored wings and a pale brown, long, barred tail. Their rumps are also golden, upper backs are green and they have bright yellow eyes with a small black pupil. Their face, throat and chin are a rust color and their wattles and orbital skin are yellow. Beak, legs and feet are also yellow.

Female Golden Pheasants are less colorful and more duller than males. They have a mottled brown plumage, pale brown face, throat, breast and sides, pale yellow feet and are more slender in appearance.

The Golden Pheasant’s preferred habitats are dense forests and woodlands and sparse undergrowth.

Golden Pheasants mainly feed on the ground on grain, invertebrates, berries, grubs and seeds as well as other kinds of vegetation.

Golden Pheasants are very timid birds and will hide in dark, dense forests and woodlands during the day and roost in very high trees during the night. Golden Pheasants often forage on the ground despite their ability to fly, this may be because they are quite clumsy in flight. However, if they are startled, they are capable of taking off in a sudden fast upward motion with a distinctive wing sound.

Little is known about their behaviour in the wild as although the males are very colorful birds, they are difficult to spot. The best time to possibly observe a Golden Pheasant is very early in the morning when they may be seen in clearings.

Vocalisations include a ‘chack chack’ sound. Males have a distinctive metallic call during the breeding season. Also, during the males elaborate courtship display, he will spread his neck feathers over his head and beak, like a cape.

Female Golden Pheasants lay around 8 – 12 eggs in April. Incubation time is around 22 – 23 days. The chicks fledge after 12 – 14 days. Males acquire their bright colors during their second year of life but are sexually mature in their first year. The life span of a Golden Pheasant is 5 – 6 years.

Golden Pheasants are classed as ‘Least Concern’ by the IUCN.