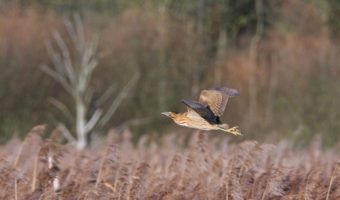 The Great Bittern bird is usually well-hidden in Phragmites reedbeds (a large grass native to wetland sites throughout temperate and tropical regions of the world).

The Great Bittern bird is a solitary bird and walks stealthily seeking amphibians and fish which are its main diet. If it senses that it has been seen, it becomes motionless, with its bill pointed upward, causing it to blend into the reeds. The Great Bittern is mostly active at dawn and dusk.

The Great Bitterns folk names include ‘barrel-maker’, ‘bog-bull’, ‘bog hen’, ‘bog-trotter’, and ‘butterbump’. These names mostly refer to the mating call of the male, which is a deep ‘fog-horn’ or ‘bull-like’ boom which is easily audible from a distance of 2 miles on a calm night. The Latin for bittern, ‘Botaurus’, also refers to the bull. The other part of its scientific name, ‘stellata’ is the Latin for ‘starry’, in reference to its plumage.

The Great Bittern bird is declining in much of its temperate European and Asian range. It is resident in the milder west and south, but migrates south from areas where the water freezes in winter.

The Great Bittern bird is one of the species to which the Agreement on the Conservation of African-Eurasian Migratory Waterbirds (AEWA) applies.