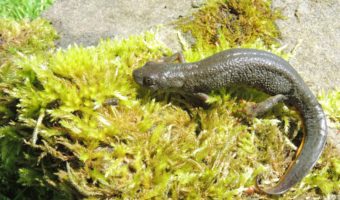 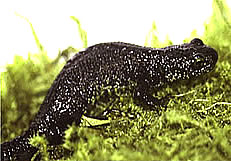 Great crested newts have dark grey-brown backs and flanks and are covered with darker colored spots so that they appear almost black in color.

Their undersides are either yellow or orange-colored and are covered in large black blotches.

Male crested newts can be distinguished from females by the presence of a jagged crest that runs along their backs, dipping at the rear of the abdomen to a smoother-edged crest above and below the tail.

Great crested newts often return to the same breeding site. After a courtship display great crested newts mate and breed in ponds and pools. The female lays 200 – 300 eggs on aquatic plants. Once juveniles have emerged from ponds it can take up to 4 years to reach sexual maturity, during which time the juvenile newts are primarily terrestrial. It is possible for the Great crested newt to reach an age of 27 years.

Outside of the breeding season, adult and juvenile newts are found in suitable terrestrial habitat where they seek shelter under rocks, logs and other suitable refuge.

In the United Kingdom, habitat of the Great Crested Newt has diminished due to land development pressure from population growth and agricultural expansion; for example, it is considered eliminated from its prior range at the Portlethen Moss Nature Reserve in Scotland.

The Great Crested Newt is a protected species in other jurisdictions as well, notably in Germany, where a planned extension to an Autobahn in Hesse may come to naught as a result.