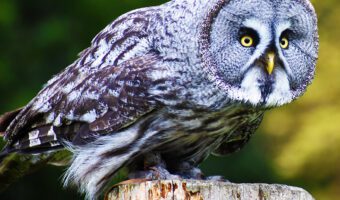 The great grey owl (Strix nebulosa) is a very large owl and is considered to be the world’s largest species of owl by length. As its name suggests, the great grey owl is grey in colour and has a dense, fluffy plumage, a large head, and long wings and tail.

The great grey owl is found in the Northern Hemisphere, in North America, Europe and Asia, and resides mainly in forest areas. In some areas, this owl is known as the Phantom of the North. It feeds primarily on small rodents and hunts at dusk and dawn.

Great grey owls are not considered to the endangered and are listed as Least Concern on the IUCN Red List.

Great grey owls have a large head, with no ear tufts and a distinctive facial disc. This grey disc has two dark concentric rings, and its short eyebrows form an “X” between the eyes. This owl also has white “bow tie” across the neck with a black centre. Its eyes are yellow and so is its bill.

The rest of the great grey owl’s plumage is grey. The underparts are dark grey with a brownish tint, while the upper parts are darker grey with pale, greyish flecks. It has a long tail that extends beyond the wings and is rounded at the end.

The great grey owl is found in northern Europe and Asia, as well as in North America. They can be found from Alaska across Canada, down the Northern Rocky Mountains, and across northern Minnesota.

While the great grey owl is predominantly sedentary and does not migrate, some of these birds travel south or to lower elevations in the winter in search of food.

The great grey owl’s habitat changes depending on its location, but they largely reside in a range of forested habitats. In Canada, they reside in dense coniferous forests, while in the western States, they live in mountainous forests. In Oregon and California, they have also been found nesting in mixed oak woodlands. These birds usually prefer pine and fir forests, away from human habitats.

The great grey owl’s diet consists mainly of small rodents, with voles being their most common food. They will also eat other small mammals, such as rats, mice, shrews, squirrels, rabbits, chipmunks, moles, and weasels. Occasionally they eat birds, such as crows and small hawks, but rodents make up 80 to 90 percent of their diet.

The great grey owl mainly hunts by perching up in a tree, looking out over an open area. However, they are also commonly seen lower to the ground, sat on tree stumps or fenceposts along roads. Their excellent hearing helps them to locate their prey, and, once spotted, they will swoop down and catch it. They may also fly low searching for their prey.

Great grey owls usually hunt early in the morning or late at night, when the light is not so good, so they rely largely on their hearing to help them. They are even able to locate prey as deep as two feet under the snow or in tunnels, and will plunge into the snow to capture small rodents. This is a hunting method that not all owl species can use, because many species do not having the hearing abilities required.

Great grey owls are generally solitary animals outside of the breeding season. They communicate with a series of very deep, rhythmic ‘whoos’, although adults are usually silent. The young chatter, shriek, or hiss.

While the great grey owl is an alpha predator, it is not as aggressive as other large predatory birds. These birds are much less likely to attack, and do not protect a large nesting territory. In general, the only time this bird is aggressive is when the female is protecting eggs and owlets.

Due to this largely non territorial behaviour, the great grey owl often goes unnoticed. They are unlikely to fly away when a human approaches and will stay very still. They also do often not respond to their own species calls, which is uncommon for an owl species.

Great grey owls are a monogamous breed, with breeding occurring from March to May. These birds do not build their own nests and will take over abandoned nests of other large birds. The female lays four eggs, which are incubated for a period of between 28 to 36 days. During the nesting period, the male hunts for food for the female and the young.

Once hatched, brooding lasts for between 2 and 3 weeks. The owlets are hatched with their eyes open and are covered in a soft white down. Between 3 and 4 weeks, the young jump or fall from the nest and must use their beak and feet to climb back into the trees. It is at this stage that the down begins to disappear and is replaced by feathers, in preparation for flying. They start to fly about a week after this.

Fledging occurs at around 8 weeks and the young remain near the nest for several months, with the female caring for them.

Despite having very few natural predators, the great grey owl is affected by other threats. The main threat to this species is the loss of habitat, largely caused by deforestation. Collisions with vehicles is another large cause of death for this owl.

These birds have a long life expectancy, living to up to 40 years in captivity.