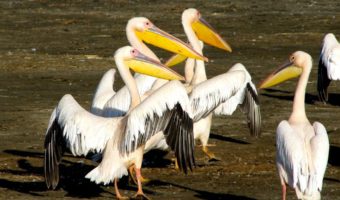 The Great White Pelican (Pelecanus onocrotalus) is one of the world’s largest flying birds that is found in the shallow swamps of Africa.

Pelicans and their relatives make up the order ‘Pelecaniformes’ and they can be distinguished from other birds by having feet with all 4 toes webbed which is known as ‘totipalmate’.

Use the information below to find out more about the Great White Pelican’s characteristics, habitat, diet, behaviour and reproduction.

Great White Pelicans are white in color with black and grey primary feathers. Their bodies are large with long, broad wings attached. They have a short tail, short, pinkish legs and webbed feet. There is a bare pink/yellow facial patch around their eyes. Their spectacular bills are azure blue on the top and yellow underneath where there is a large pouch. The bill has a central red stripe, and ends in a small, red hook.

The Great White Pelican’s chest and throat may have pinkish or yellowish/orange coloration depending on the breeding season. In breeding condition the male has pinkish skin on is face and the female has yellowish/orange skin.

The Great White Pelican’s huge, long bill/beak is used to scoop up fish from the water. The pouch under the beak is stretchy and can hold several litres of water. As the Pelican pushes its bill underwater, the lower bill bows out, creating a large pouch which fills with water and fish. As the bird lifts its head, the pouch contracts, forcing out the water but retaining the fish which are swallowed whole.

Great White Pelicans can be found in the swamps, freshwater lakes, brackish lakes, marshes and deltas of Africa (Asia and Europe).

Great White Pelicans feed mainly up on fish such as carp and cichlids but will also eat small invertebrates. These water birds do not have to dive to catch their prey, instead they use their large bills to scoop the fish into their mouths by dipping their heads into the water.

Feeding is sometimes done cooperatively, whereby, several Pelicans will move into a circle to concentrate the fish and dip their heads into the water in unison to catch the fish. This makes for successful fishing. Each Pelican needs about 1.2 kilograms (2.6 pounds) of fish every day.

On Lake Rukwa in Tanzania, there is the largest colony of Pelicans with over 80,000 birds and it needs 35 million kilograms of fish every year to satisfy their hunger.

Pelicans are not restricted to fish and are often opportunistic foragers. Sometimes, they will eat chicks of other birds. Pelicans from the Dassen Island colony prey up on chicks weighing up to 2 kilograms from the Cape Gannet colony on Malgas Island. Great White Pelicans also eat crustaceans, tadpoles and even turtles. They readily accept handouts from humans, and a number of unusual items have been recorded in their diet. During periods when food is scarce, Pelicans also eat seagulls and ducklings and will also steal prey from other birds.

Although Great White Pelicans are quite cumbersome on land, they are magnificent, graceful fliers who can fly continuously for a whole day and night covering distances of up to 300 miles without stopping. Pelicans often travel in V-formation groups which is a spectacular sight.

The Great White Pelican is well adapted for aquatic life. In water, the birds are just as graceful as when they are flying. They are fast, strong swimmers who can reach speeds of up to 6 kilometres per hour (3.7 miles per hour) as their strong legs and webbed feet propel them through the water in preparation for their sometimes awkward take-offs.

Great White Pelicans are generally silent apart from when they are nesting during breeding season.

Great White Pelicans nest in large colonies. During breeding season, adult pelicans emit a low, hoarse display call. Nests are made in scrapes in the ground and are lined with vegetation, grass, sticks, feathers and other available materials. The female lays 2 large, chalky white eggs in the nests which are incubated for 29 – 36 days.

The Pelican chicks are grey and have dark flight feathers. They are cared for by both parents. The chicks become fledglings at around 65 – 75 days. Pelicans reach sexual maturity at 3 – 4 years. The life span of the Great White Pelican can be over 16 years old.

Pelicans are very vulnerable to pollution and because of overfishing in certain areas, they are forced to fly long distances just to find enough food.

Great White Pelicans are exploited for many reasons. Their pouch is used to make tobacco bags, Their skin is turned into leather, the guano (faeces from sea birds, seals or bats) is used as fertiliser, and the fat of young pelicans is converted into oils for traditional medicine in Asia. Human disturbance, loss of foraging habitat and breeding sites and pollution are all contributing to the decline of the Great White Pelican.

More birds that start with the letter P