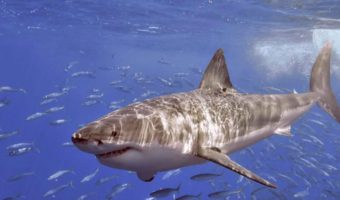 The Great White Shark (Carcharodon carcharias), is the largest shark found in all major oceans, particularly cool, temperate coastal waters, and is one of the most feared predators of all marine animals. The name of a group of great whites sharks is called a ‘school’ or ‘shoal’. Young sharks are called ‘pups’.

Great white sharks have been observed along the coastlines of California to Alaska, the east coast of the USA and most of the Gulf coast, Hawaii, most of South America, South Africa, Australia (except the north coast), New Zealand, the Mediterranean Sea, West Africa to Scandinavia, Japan, and the eastern coastline of China and southern Russia.

Other Names for the Great White Shark 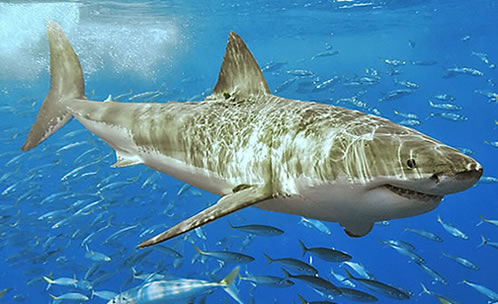 Great White Sharks are slate grey in color which helps them camouflage on the rocky sea floor while waiting to attack their prey. Their bellies are white and this is where they get their name from. Great White Sharks have a streamlined torpedo shape which enables them to be very powerful swimmers. Their large, strong, crescent-shaped tails help propel them speedily through the waters. Despite their enourmous size, these deadly sharks can swim at speeds of 15 miles per hour (24 kilometres per hour).

Great White Sharks have huge mouths that are lined with serrated, razor sharp teeth that are triangular in shape. The teeth are arranged in rows. The first 2 rows are used for obtaining prey and the other rows rotate into place as they are needed. The teeth measure 3 inches (7.5 centimetres) in length. As teeth are lost, broken or worn down, they are simply replaced by new teeth. Great White Sharks are equipped with over 3,000 teeth at any one time.

Great white sharks have large conical snouts with an excellent sense of smell with which they can easily detect prey. Shark nostrils are only used for smell and not for breathing, their gills are used for breathing. A shark relies completely on its sensory organs in all aspects of its life. One of the reasons sharks are extremely good predators is their amazing sensory ability. Their senses are remarkable like no other fish or mammal. Sharks rely on their complex sensory system in all aspects of their life, hunting, feeding, mating and general existence.

Great White Sharks have the capability of detecting a single drop of blood in 25 gallons (100 Litres) of water and can sense even tiny amounts of blood in the water up to 3 miles (5 kilometres) away.

Hearing – sharks have acute hearing and can hear prey from many miles away.

Smell – sharks rely primarlily on their sense of smell for detecting prey.

Lateral Line – this system is used to detect movement and vibration in the surrounding water.

Eyesight – the shark has pitch black eyes that have reflecting layers called tapetum lucidum located behind the retina. Another modification found in some sharks is the presence of a nictitating membrane. This structure is a denticle covered membrane that protects the eye. It closes when the shark passes close to objects and also during biting or feeding.

Ampullae of Lorenzini – these are small vesicles and pores that appear around the head of the shark and are visible to the naked eye. They are used to detect weak magnetic fields produced by other fishes, at least over short ranges. This enables the shark to locate prey that are buried in the sand or nearby movement.

The Great White Shark is a ferocious carnivore who likes to strike it’s prey from underneath, being able to completely leave the water and breach like a whale. Nothing is safe from this giant fish who blends in with the dark waters enabling it to approach unsuspecting prey. When an animal is sighted, the shark accelerates quickly to the surface and rams into their prey, simultaneously stunning it and taking a large bite. They then return to the waters to feed on the carcass. 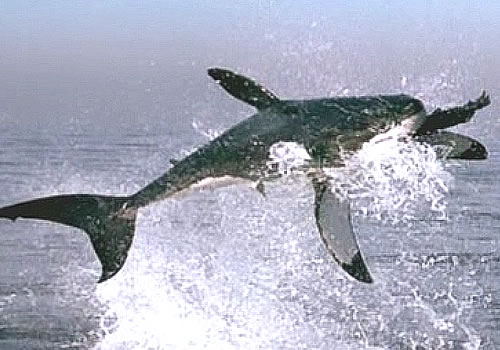 Great White Sharks feed up on a variety of marine animals including small toothed whales such as Belugas, seals, sea lions, sea turtles and carrion (dead animals floating in the water). A large meal can satisfy the great white shark for up to 2 months.

Great White Sharks do not chew their food, instead, their razor sharp teeth rip prey into mouth-sized pieces which are swallowed whole.

Great white sharks are found in all major oceans and coastlines around the world, particularly cool and temperate coastal waters.

The great white shark swims in a stiff-bodied, tuna-like position, unlike the sinuous whole-bodied swimming stroke of most sharks.

Great White Sharks reach sexual maturity at around 15 years old. When the sharks are born, usually along with a dozen siblings, they immediately become independant and swim away from their mother who may see them as prey and eat them.

Newly born sharks (pups) are not at all small and can measure around 5 feet (1.5 metres) in length already. As they grow, they will at least triple in size. Shark pups generally feed up on fish, rays and other sharks.

The life span of the Great White Shark is around 30 years or more.

Even though great white sharks have been recorded to attack humans, we are not actually on their menu. It is thought the these sharks are just curious and sample bite before releasing their victim. Most great white shark attacks are not fatal. Great white Sharks account for about half to a third of all 100 annual reported shark attacks. Of these 30 – 50 attacks, around 10 – 15 are fatal.

The Great White Shark is an Endangered Species but is classed as ‘Vulnerable’ by the IUCN. Threats to these massive sea creatures include overfishing and accidental catching in gill nets. Numbers are decreasing because of these factors.

The biggest great white shark on record was 23 feet (7 metres) long, weighing about 3200 kilograms (7,000 pounds).The great white shark is the only species of shark that will go to the surface and poke its head up out of the water. Probably to spy for seals and sea lions.