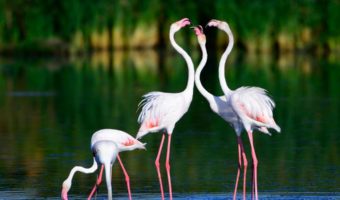 Out of the six species of flamingo on our planet, the Greater Flamingo (Phoenicopterus roseus) is the most common and widespread member of the flamingo family.

The Greater Flamingo is an easily identifiable, colorful wading bird and is often found flocking together with the Lesser Flamingo in the great salt lakes across Africa.

These famous pink birds can be found in warm, watery regions on many continents and also occur in Asia in the coastal regions of India and Pakistan, Central America, South America, the Caribbean and in Southern Europe.

When flamingos flock together, they are referred to as a ‘colony’ or a ‘stand’.

The flamingo’s plumage is pinkish/white in color, with red wing coverts and black primary and secondary flight feathers. Their long, downward bending bills are pink with a black tip and their long, thin legs are also pink. Greater Flamingos have peculiar shaped heads on long, lean, curved necks with a distinctive downward bend. Flamingos have yellow eyes.

Greater Flamingos are found in a variety of saltwater habitats including salt or alkaline lakes, estuaries, shallow coastal lagoons and mudflats. The Greater Flamingo rarely inhabits areas of freshwater other than using freshwater inlets for bathing and drinking. Greater Flamingos that live outside the tropics often migrate to warmer climates for the winter months.

Greater Flamingos are omnivores and filter-feeders. Flamingos mainly feed during the day and use their long legs and webbed feet to stir up the bottom of the water where they then sweep their bills upside down through the water. A flamingo’s bill has a filter-like structure to remove food from the water before the liquid is drained.

Water is sucked in through the partly opened bill. As it is squeezed out again by the tongue, a row of spines or lamellae along the edge of the bill filter out the tasty morsels within. They usually feed with their head fully immersed in the water and they can remain that way for up to 20 seconds. Flamingos pump their tongues up and down, 5 – 6 times per second, pushing the water out of their beak.

The flamingo’s pink coloration comes from its diet of Shrimp and other pink crustaceans.

Flamingo feathers are tinged a beautiful rose pink color due to colored materials called carotenoids in the tiny shrimps that they feed on. If they do not eat the shrimps, their feathers turn pale. Flamingos in captivity tend to be paler than wild species unless their diet is supplemented. In captivity, they are fed special food that contains these natural pigments to ensure that their feathers are colored.

Greater Flamingos are gregarious birds and live together in flocks or dense colonies numbering between 10 – 12 birds, such as those in the Galapagos Islands, to over 20,000 birds on the African salt lakes. In exceptional cases up to 200,000 pairs have been observed. These large flocks give them safety in numbers. Flocks remain closely packed and individuals are protected from predators by the other flock members while they have their heads down in the mud when feeding.

Greater Flamingos are vocal birds and keep in contact with each other by producing a deep honking sound, similar to a Goose. They call loudly during courtship but they have a quieter call while they are feeding.

These beautiful pink shore birds are surprisingly good swimmers but tend to thrive on the shallow mudflats and lagoons. Greater Flamingos are a remarkable sight when in flight with their long, thin neck outstretched in front and their long legs outstretched behind them. Flocks form either long, trailing lines or irregular shapes whilst flying.

Flamingos are often seen standing on one leg. This stance is thought to keep the hidden leg warm amongst their feathers. On very hot days, flamingos may stand on both legs.

Greater Flamingos are not territorial birds but will defend their nests during breeding season. Greater Flamingos have few natural predators, however, their eggs and chicks are preyed upon by other birds including the Marabou Stork.

Greater Flamingos build their nests in pairs. Nests are made out of hardened mud with a shallow depression in the top, although a small pile of stones and debris, lined with grass, twigs and feathers, is used if mud is not available. One of the pair stands over the nest site and drags mud between its webbed feet with its curved bill. The mud is then pressed into place with the bill and feet. The nest of each mating pair is situated approximately 1.5 metres (4.9 feet) from neighbouring nests so the chick remains safe from other breeding pairs.

Flamingos breed during April and May while gathered in groups on the extensive, warm, watery mudflats. Flamingos are are monogamous, meaning pairs stay together for life. At the beginning of the nesting season, flamingos perform spectacular group courtship displays of synchronized dancing, preening, neck stretching and honking.

Like all species of flamingo, the female Greater Flamingo lays a single chalky-white egg on a mud mound in shallow water. The mating pair take turns to incubate the single egg. The egg hatches after 27 – 31 days and the parents help the chick out of the egg by pulling pieces of the shell away.

Flamingo chicks are grey and white when born and do not develop their pink coloration for around 2 years. The chick is fed for at least the first 3 – 4 weeks entirely by the parents who secrete a creamy pink liquid called ‘crop milk’ which comes from the parents upper digestive tract. Either parent can feed the chick this way and other flamingos can act as foster feeders.

The chicks fledge after 10 weeks, but remain in creches for a further month. The chick is born with a straight bill which starts to curve at about one month and can filter feed properly at two and a half months. Amazingly, the adult flamingo is able to locate its chick from hundreds or thousands of other chicks, by its ‘call’.

Flamingos are fully grown at 2 years and are able to mate at 3 years. Most flamingos will not breed for the first time until they are 5 to 10 years old. Flamingos may not breed when wetlands are dry and food is scarce. Some years, their feeding pools are teeming with life and there is plenty of food with which to feed their chicks. However, other years the pools are nearly empty. As a result, flamingos may only breed when conditions are just right.

The Greater Flamingo can live to the age of over 60 years old in captivity. The average lifespan in the wild is around 30 – 40 years.

The Greater Flamingo is classed as ‘Least Concern’ by the IUCN. Although flamingos are numerous and believed to be increasing in some areas, the Greater Flamingo is vulnerable to changes or disturbance to its relatively limited number of breeding sites. Breeding success is often reduced as a result of human disturbance or lowering water levels, which can increase the salinity of feeding sites and so affect food resources.

Climate change, and its potential effects on sea level and rainfall, may therefore have a serious impact on breeding sites in the future. The Greater Flamingo breeds quite well in captivity and breeding populations are currently maintained at various locations.

Flamingo comes from the latin word for 'flame'- flamma & ignis.The Flamingo's characteristic pink colouring is caused by the beta carotene in their diet.The Greater Flamingo is the state bird of Gujarat, India.The oldest known Greater Flamingo who is a resident of the Adelaide Zoo in Australia, is at least 77 years old. The flamingo's exact age is not known, however, he was already a mature adult when he arrived in Adelaide in 1933, and he is still there as of 2011.