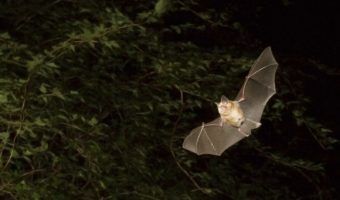 This species of bat is rare in Britain and is confined to just a small number of sites. Its breeding sites include Brockley Hall Stables near Bristol, Iford Manor near Bath and Littledean Hall in the Forest of Dean.

The Greater Horseshoe Bats winter hibernation sites include Banwell Caves and Compton Martin Ochre Mine in the Mendip Hills, Chilmark Quarries in Wiltshire and Combe Down and Bathampton Down Mines near Bath. In Dorset, the Greater Horseshoe Bat roosts at Bryanston, Creech Grange and in Belle Vue Quarry. The species also occurs at Berry Head in Devon.

The Greater Horseshoe Bat mates from autumn to spring but mostly in late September or October.

In the attics of old buildings, nursery roosts are found because they can be accessed by undisrupted flight. They can contain up to 200 females. Adult males have been found in the nuseries, however, they tend to leave when the young are born in midsummer.

The reason the Greater Horseshoe Bat is rare is because chemicals used in buildings that these bats occupy can put them at risk. Roost sites being converted or becoming derelict. Chemicals used on vegetation. Foraging habitats lost because of changes in the land-use.

To prevent extinction of the Greater Horseshoe Bat there needs to be protection of winter roosts, nursery roosts and prey population.