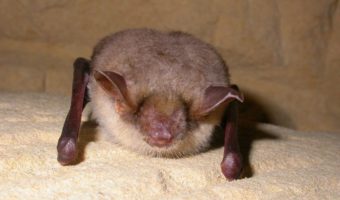 One was found by an elderly lady in Bognor, but unfortunately it died. Last year a single young male was discovered hibernating in a tunnel near Chichester.

Bats are very misunderstood mammals, they are not actually blind like they are said to be and they are very skillful flyers. Bats fly mainly at night and produce a stream of high-pitched calls and listen to the returning echoes which provide them with a distinct ‘sound’ picture of their surroundings.

The Greater Mouse-Eared Bat is the largest British species of bat. The coat is short and dense with grey brown coloring on their back and paler on the underparts. Their face is bare and a pink color. Their ears are light in color and long and broad. Their tragus is long, being broad at the bottom but becoming narrower near its tips. The size of the Greater Mouse-Eared Bat is not only due to its large wingspan but also because its body is relatively large. Their wings are large and broad and grey in color. Its flight is slow but strong.

The Greater Mouse-Eared Bat is a bat of open woodland and parkland. In the south of Europe it will inhabit caves in the summer months, but further north it lives in warm attics, towers and cellars. It hibernates in caves, mines or cellars with a temperature of between 7 and 12 centigrade. In the hibernacula (winter quarters, as of a hibernating animal) between 100 and 1000 bats will gather.

Of the 16 species of bat left in Britain, six are endangered or rare and six others are regarded as vulnerable.

Whilst the mouse-eared bat may be an elusive character to track, the pipistrelle bat, our commonest species, can be found in abundance at Hampshire’s largest bat roost – home to up to 800 bats. Each summer large numbers of bats swarm outside their main roost. Why they do so is not known, however, it is thought it may be a way of calling other bats to the roost.

Whilst many people fear the bat – largely due to its fictional vampire connections – they are in fact very useful to us.

The pipistrelle bat is only four centimetres long and weighs less than a two pence coin but can eat up to 3,000 midges in one night. However, even the relatively common pipistrelle bat has declined 70 per cent since the 1970’s largely due to intensive farming, particularly the use of pesticides and the removal of hedgerows. Recent research has shown just how vulnerable our bat species are.

A study by the Bat Conservation Trust and the RSPB reveals that bat roosts are being routinely damaged or destroyed by developers. Most of these offences occur when builders replace soffit boards on houses or renovate derelict buildings such as barns.