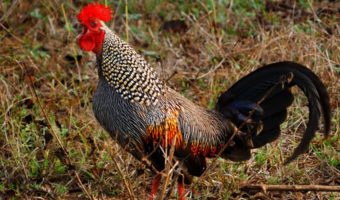 The Grey Junglefowl (Gallus sonneratii) is a wild species of domestic fowl endemic to the evergreen hill forest in southern and western India. Grey junglefowl are found mainly in peninsular India but extend into Gujarat, Madhya Pradesh and south Rajasthan.

Use the information below to find out more about the Grey Jungle fowl bird’s characteristics, habitat, diet, behaviour and reproduction.

A grey junglefowl is 15 to 29.5 in (38 to 75 cm) in length and weighs around 2.2 to 5.5 lb (0.5 to 2.5 kg). The male grey junglefowl has a black cape with golden/yellow color spots and its waxy, waterproof plumage is greyish/brown and finely patterned. It has a red wattle and comb and red legs which have spurs. On its neck are long dark feathers which end in a small yellow plate. Males moult their colorful neck feathers during or after the summer breeding season. Their central tail feathers are long and curved,

The female is much duller in appearance which is typical of most female birds. They have brown and white streaks on their underparts and a finely patterned yellow cape draping their neck and shoulders. The female’s legs are yellow and lack the spurs that the males have.

The grey junglefowl can live to be up to 10 years old.

This species is endemic to India, found in the states of Gujarat, Rajasthan, Madhya Pradesh, Andhra Pradesh, Karnataka, Tamil Nadu, and Kerala. They live in deciduous evergreen forests, and the grey junglefowl’s preferred habitats are thickets on the forest floors and open scrub. 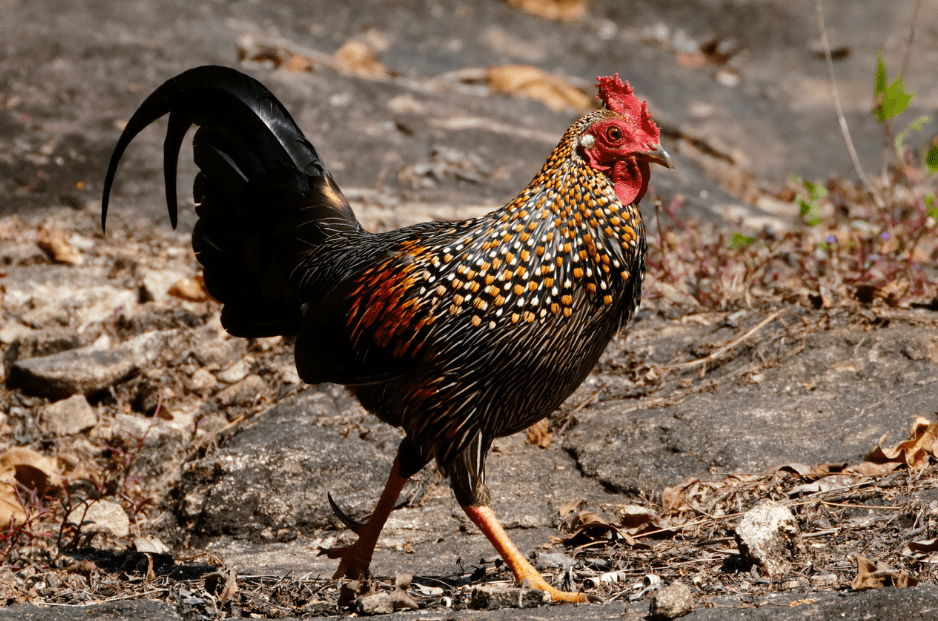 Grey junglefowl forage in small mixed groups of both males and females. They are omnivores, and feed on bamboo seeds, grains, termites, spiders, ant larvae, moths and berries.

Grey Junglefowl are vocal birds and produce calls which are loud and distinctive and sound like ‘Ku-kayak-kyuk-kyuk’. The call of the Grey Jungle fowl can be heard early in the morning or at dusk. Unlike the domestic fowl, these birds do not flap their wings before producing the calls.

They are also social birds, and live in groups which have a dominating male rooster and other birds.

Grey Jungle fowl are mostly seen on the ground but they are able to fly into trees to escape predators or just to roost. These hardy birds are known for their foraging and defense behaviours
being highly ritualized.

The grey junglefowl breeds between February and May. Females will choose males that have a more vibrant plumage and flamboyant neck feathers with bright yellow spots on the black cape. The males shred their neck feathers once the breeding is over.

The female lays between 4 and 7 pale creamy eggs which are incubated for 21 days. Males will often make dutiful fathers, brooding chicks on or close to the ground on rainy nights. The female rears the chicks for around 9 weeks and then abandons them to the male while she incubates a new clutch of fertile eggs.

Sometimes, the grey junglefowl will hybridize in the wild with the red junglefowl. They also hybridize in captivity and sometimes with free-range domestic chickens kept in habitations close to forests. 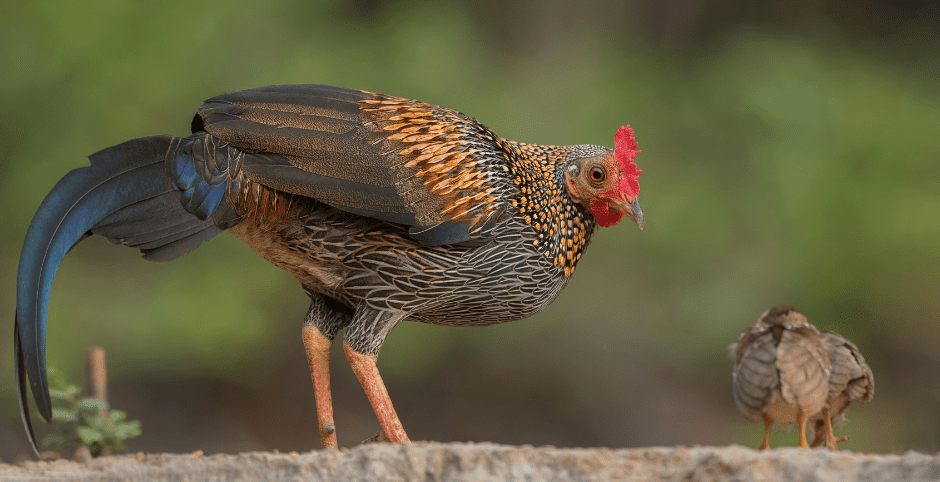 Grey Junglefowl are classed as ‘Least Concern’ by the IUCN. Although these birds are plentiful, they are still hunted for meat and the long neck hackle feathers which are used for making fishing lures. Habitat loss is also another threat to the Grey Junglefowl.

Did you know this about Grey Junglefowl?

Crosses between the Grey Jungle fowl and the domestic chickens are known as Bengals.