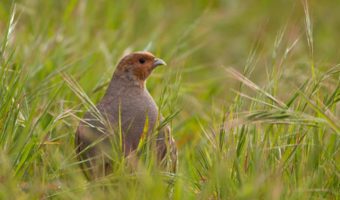 The Grey Partridge (Perdix perdix) breeds on farmland across most of Europe into western Asia and has been introduced widely into North America and are quite common in some areas of southern Canada and the northern United States. The Grey Partridge nests from May through to July. Hens can lay up to twenty eggs in a ground nest. The nest is usually in the margin of a cereal field, most commonly winter wheat.

The Grey Partridge is a non-migratory terrestrial species, which forms flocks outside the breeding season.

The Grey Partridge is a rotund bird, 28 – 32 centimetres long, brown-backed, with grey underparts, an orange face and a chestnut belly patch. There is little difference between the male and female grey partridge, although the female has a smaller belly patch. Young grey partridges are essentially yellow-brown and lack the distinctive face and underpart markings. The Grey Partridge song is a harsh kieerr-ik.

When disturbed, like most of the gamebirds, the Grey Partridge flies a short distance on rounded wings, often calling ‘rick rick rick’ as it rises.

The Grey Partridge feeds mainly on seeds and grain, relying heavily on waste grain (corn, sunflowers, wheat) during the winter. The Grey Partridge also feeds on insects during the summer months and green leaves, shoots and buds. The young in particular take insects as an essential protein supply. During the first 10 days of life, the young can only digest insects. The parents lead their chicks to the edges of cereal fields, where they can forage for insects.

The Grey Partridge is declining greatly in numbers in areas of intensive cultivation such as Great Britain, due to loss of breeding habitat and food supplies.

Their numbers have fallen by 85% in the last 25 years. Efforts are being made in Great Britain to halt the decline by creating Conservation headlands. In 1995 the Grey Partridge was nominated a Biodiversity Action plan species.

Widespread and common throughout its’ large range, the Grey Partridge is evaluated as Least Concern on the IUCN Red List of Threatened Species.