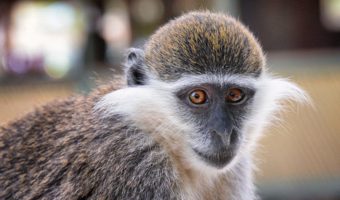 The Green Monkeys or Vervet Monkeys (Chlorocebus sabaceus) are medium-sized primates from the family of Old World monkeys. There are six species currently recognized, although some classify them all as a single species with six subspecies. Either way, they make up the entirety of the genus Chlorocebus.

Green Monkeys occur throughout the Northern and Southern Savanna, from Senegal to Sudan and south to the tip of South Africa. They are adapted to practically all wooded habitats outside the equatorial rainforest.

The top side fur of the Green Monkey varies by species from pale yellow through grey-green brown to dark brown, while the lower portion and the hair ring around the face is whitish yellow. Their face, hands and feet are hairless and black, although their abdominal skin is bluish. Male Green Monkeys have a bright blue scrotum and red penis.

Green monkeys are diurnal being most active in the early morning and late afternoon. Green monkeys are territorial animals, however, they generally avoid serious conflicts (defend with loud barking and displays). They are mainly ground dwellers, however, they take shelter in the trees when alarmed and they also sleep in trees. Green monkeys are usually found in groups of 20 – 50 individuals. Social structure is similar to other Old World monkeys in that the stable core of any group consists of several families of closely related adult females and their dependent offspring.

Females stay in the natal group, males transfer to a neighbouring group at adolescence. To minimize aggression from the transferred-to group, many males transfer in the company of age mates or maternal brothers. Male Green monkeys transfer from group to group several times during their lives. Young females serve as temporary caretakers of their mothers subsequent offspring. As a result, bonds are formed not only between mother and offspring but also among maternal siblings. Adult males interact only rarely with infants and show no special preference for those infants that are likely to be their offspring.

Green monkeys have a creaking cry and a staccato bark that enables members of a troop to keep in contact. Green monkeys have a variety of alarm calls, distinguishing between avian, snake or mammalian predators. Grooming removes parasites and dead skin, but the primary function is to establish and maintain social bonds

Being small and not fast runners, the Green monkey cannot afford to venture far from the safety of trees. It is essentially an edge species and typically associated with riverside forests, however, in the dry savanna, they stay near the acacia trees. Green monkeys are omnivores mostly eating fruits, flowers, seeds, seedpods, leaves, grasses and roots. On occasion, birds, eggs, small reptiles and insects.

Green monkeys breed throughout the year, however, most births happen just before the rainy season, so that lactation proceeds when food and water are more abundant. Gestation lasts 163 days. Green monkeys reach sexual maturity at the age of 4 – 5 years. Females give birth to a single offspring. At birth Green monkey infants have little fur, this is why they seem to have a blue color. Its coat has specks of olive green and yellow. As the infant matures and becomes more independent, he/she will stray from its mother, being carried only when the troop moves or when danger threatens. As the monkey develops, its fur thickens and becomes a brownish-grey color. The life span of a Green monkey is 17 years in the wild and up to 30 years in captivity.

Although Green monkeys are not listed as endangered or vulnerable, numbers are declining because of destruction of forest habitat and excessive hunting by people. Potential predators of the Green monkeys include lions, leopards.

The Grivet Monkey is a black and white Abyssinian monkey part of the Vervet monkey group classed as genus Chlorocebus. Grivet monkeys are found only in sub-Saharan Africa. Their range extends from Senegal and Ethiopia down to South Africa.

Grivet monkeys inhabit forests, woodlands and savannas near rivers and streams. They spend most of their time in the trees.

The first digit on their hands and feet are opposable allowing the Vervet monkeys to grab hold of objects. Their hands are used for moving, feeding and grooming. The hind legs are especially strong for leaping across branches. Their long tails are not prehensile, but are used for balance, steering and braking while leaping from branch to branch. Grivet monkeys have cheek pouches to store their food as they move to a safer place to eat. When full, the cheek pouches can hold an amount of food equal to what the stomach can hold.

Grivet monkeys live in groups of 10 to 27 within a protected territory. They are most active in the morning and in the late evening. Grivet monkeys sleep in the trees but do spend some time on the ground. They are never far from water and are good swimmers. When they become excited or angry, they grimace and expose their teeth.

Grooming is a common behaviour among most primates and Grivet monkeys are no exception. Grooming is commonly used as a courtship strategy. Grivet monkeys are omnivorous, however. they have a heavy preference for fruits and grains. In the wild, They will eat fruit, leaves, grain, roots and occasionally reptiles, young birds and insects.

Currently specific to the island of Saint Kitts the Grivet monkeys have developed one annoying habit to many tourists. The monkeys have developed a taste for alcoholic tropical fruit drinks. The monkeys will commonly steal brightly colored drinks left behind by tourists on the beach. Many tourists have also found out these monkeys will deliver a powerful bite if they are cornered. Care should be taken when approaching any Grivet monkeys. If at one point they were domesticated in the centuries gone past, they are no longer.

Grivet monkeys have a gestation period of about 7 months. Females usually give birth to a single offspring. They breed from July to November. The young clings to its mothers belly and can support its own weight. Other adult monkeys may help in caring for and protecting the babies. Grivet monkeys can live to be 30 years old.

Grivet monkeys are classed as being ‘threatened’ due to continuous deforestation and destruction of their natural habitat. Potential predators of the Grivet monkeys include lions, leopards.