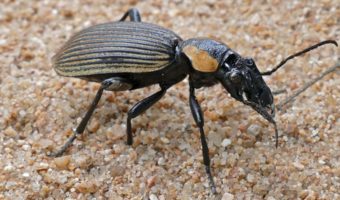 Ground Beetles belong to the family Carabidae. This family of beetles is a large family, with more than 20,000 species worldwide (approximately 2,200 of which reside in North America). Most species of Ground Beetle are carnivorous, and some will run swiftly to catch their prey. Although there is some variation in their body shape and coloring, most are shiny, black (some are metallic) and have ridged elytra (wing covers).

Ground beetles in the genus ‘Brachinus’ are commonly known as ‘Bombardier Beetles’ (more than 500 species altogether). Ground Beetles are known for their defensive ability to squirt a jet of hot foul-smelling liquid from their abdomens.

Ground beetles in the subfamily ‘Cicindelinae’ are known as ‘Tiger Beetles’. Unlike most of the other species of Carabidae, which are nocturnal, the Tiger Beetles are active diurnal hunters and are often brightly colored.

All species except the more primitive ‘Paussinae’, have a groove on their front tibiae (leg) bearing a comb of hairs which is used for cleaning their antennae. Common habitats are under the bark of trees, under logs, or amongst rocks or sand by the edge of ponds and rivers.

Ground beetles of the species ‘Promecognathus laevissimus’ are specialised predators of the millipede (Harpaphe haydeniana) a millipede found in the moist forests along the Pacific coast of North America, countering the hydrogen cyanide (a colorless, very poisonous and highly volatile liquid that boils slightly above room temperature at 26 °C ) defence mechanism used by the millipede.

Ground beetles in the subfamily ‘Mormolycinae’ are known as ‘Violin Beetles’. Violin Beetles are carnivorous and use their elongated heads to search crevices for small larvae. Their larvae have been found living in tunnels in the large bracket fungi that are common in the humid forests of Malaysia. Violin beetles have a very flat or depressed body form and are found in soil cracks, under bark, or in the axils of bromeliads. The flattened form allows the beetles to move more freely below the soil, subcortical space, or between oppressed leaf sheaths.

The violin beetles common name comes from the fact that their outline resembles the musical instrument. The beetles are 10 centimetres (4 inches) long and have large, flat, translucent expansions on each side of the body. These expansions are projections of the wing covers or elytra.

The most effective method of controlling this particular pest is to spray entrances such as windows, doors and skirting boards with a repellent known as ‘cypetmethrin’. The beauty of this insecticide is that it is not really harmful to humans or household pets and ground beetles hate it with a passion.