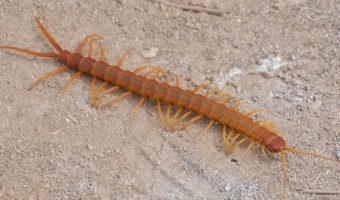 Ground centipedes which are most likely found living in the soil are quite long and slender and are known as ‘geophilids‘ which means ‘Ground lover’. Ground centipedes are sometimes referred to as ‘wireworms’, however, this name actually belongs to the larvae of the Click Beetle.

The plates covering the top and bottom of each trunk segment, apart from the first and last, are each divided horizontally into two sections. A small amount of movement is possible between each section and the overall effect is to double the amount of joints in the body. This makes the centipede extremely flexible, and it can fold itself in half very easily.

This flexibility has obviously evolved because of the centipedes connection with the soil, where the ability to be able to move around in a confined space, is more important than speed.

The antennae and the sensitive hind legs are quite short, again in connection with the subterranean way of life, longer legs would get in the way and would also soon get broken.

Ground centipedes usually lay their eggs in the spring. The female digs out a small chamber in the soil and lays thirty or forty eggs there. She then coils her body around them and remains there for several weeks, until the eggs have hatched and the young centipedes are able to fend for themselves.

If the female is removed, the eggs generally go mouldy and die. It is believed that the females lick their eggs from time to time, and in doing so, either remove mould spores or else spread a mould-killing substance over the eggs (similar to earwigs).

The young centipedes emerge from the eggs with a full set of legs, although these are short stumps to start with. The babies remain in the brood chamber with their mother for about eight weeks, during which time they change their skins twice.

The legs and the poison claws become more fully developed during this period as well, and the baby centipedes gradually disperse to fend for themselves. They have to change their skins several times more, and become longer, before they are fully mature.