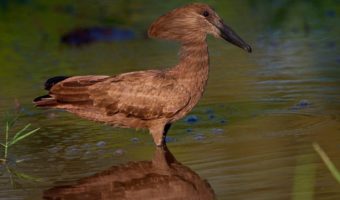 The Hamerkop (Scopus umbretta), is a remarkable wading bird who is so named as its head shape, curved bill and back crest resembles a hammer.

The Hamerkop is distributed around the coasts of Africa, south of the Sahara and Madagascar.

The Hamerkop constitutes the family Scopidae and genus Scopus all on its own because of its unique characteristics.

The Hamerkop is currently placed in the pelican and cormorant group, Pelecaniformes, although it is classified into Ciconiiformes (storks, herons, egrets, ibises, and spoonbills) by other authorities.

The Hamerkop is known by several other names:

Use the information below to find out more about the Hamerkop’s characteristics, habitat, diet, behaviour and reproduction.

The Hamerkop is a distinctive medium sized wading bird measuring 47 – 56 centimetres in length and weighing around 415 – 430 grams. The color of its plumage is brown and there are hints of iridescent purple on its back.

The Hamerkop’s bill is long and flat and slightly hooked at the tip and their is a square, blunt crest on its nape. Compared to other wading birds, its legs and neck are shorter in length. The Hamerkop’s feet are partially webbed and its middle toe is comb-like (pectinated), similar to that of a Herons, and is used to groom its feathers.

The Hamerkop’s wings are large, broad and rounded and its tail is short. The Hamerkop has a wingspan of 90 – 94 centimetres. The Hamerkop is so named because of its hammer-shaped head.

The Hamerkop prefers wetland habitats such as all types of shallow slow moving or still waters including irrigated land such as rice fields, also savannas and forests. Territories are dominated by pairs. Hamerkops move in quickly when new bodies of water occur such as dams or canals.

Hamerkops usually feed alone or in pairs and mainly during the daytime, taking a rest at noon to roost. Their diet consists of mainly aquatic invertebrates and they will also eat fish, insects, shrimp and rodents. They wade through shallow water searching for prey. To flush prey out of hiding, they rake their feet through the water bed or flap their wings to startle what ever is hiding in the mud or under rocks.

Hamerkops are soaring birds who fly with slow wing beats and stretch their necks forward when in flight. When flapping their wings, their necks coil backwards. Hamerkops are vocal birds when in groups and produce ‘keks’, ‘yips’ and shrills when in flight, otherwise they are generally silent birds particularly when alone. It will often perch on the backs of hippopotamuses, spying the ground for frogs.

Hamerkops have a very strange behaviour that is unlike other birds. Several or more of the birds get together and perform rituals or courtship displays that involve running around each other in circles, fluttering their wings, raising their crests and calling loudly. Another unusual feature is ‘false mounting’. This involves one bird standing on top of another and appearing to copulate, however, neither are mates and copulation does not actually take place.

Another unique feature of the Hamerkop is that, although they are only medium-sized birds, they have huge nests that can measure over 2 metres in depth and width and weigh up to 50 kilograms in weight. These nests are made from 1000’s of sticks, twigs. reeds. grasses and stems of aquatic vegetation held together by mud and are so strong that they could hold the weight of a man. They take around 3 – 6 weeks to complete having been worked on by both members of a pair.

Nest walls are built on a sturdy platform and topped with a domed roof. A mud-plastered entrance 13 to 18 centimetres wide in the bottom leads through a tunnel up to 60 centimetres long to a nesting chamber large enough for the parents and their young. The outside of the nests are decorated with bright objects that the birds collect.

Nests are often built in the fork of a tree, on a cliff ledge, a water bank, or dam and preferably over a water source. Hamerkops are obssessed with building nests and will construct 3 – 5 nests per year in their territory, whether they are for breeding purposes or not. When nests are completed, a pair of Hamerkops will perform a display or ritual similar to the ones afore-mentioned.

Nests are sometimes taken over by Eagles or Barn Owls, but may be recalimed by the Hamerkops once the intruders have left.

The female Hamerkop lays between 3 and 7 white eggs that soon become soiled and stained. Both male and female take turns to incubate the eggs over a period of 28 – 30 days. Both parents care and feed the young although chicks may be left in the safety of their huge nests for long periods of time which is quite common with wading birds.

The hatchlings are covered in a grey down and have broad bills. At around 17 days old, the chick’s head and crest plumage has developed. Juveniles are able to leave the nest at 44 – 50 days old but roost in the nests during the night for around 2 months after hatching.

The Hamerkop is classed as ‘Least Concern’ by the IUCN.

Did you know this about Hamerkops?

The Hamerkop has supernatural powers for the indigenous people:

There are many legends about the Hamerkop. In some regions, people state that other birds help it build its nest.

In some cultures, the Hamerkop is known as the ‘lightning bird’, and the Kalahari Bushmen believe or believed that being hit by lightning resulted from trying to rob a Hamerkop’s nest. They also believe that the inimical god, Khauna, would not like anyone to kill a Hamerkop.

According to an old Malagasy belief, anyone who destroys a Hamerkop’s nest will get leprosy, and a Malagasy poem calls it an ‘evil bird’.