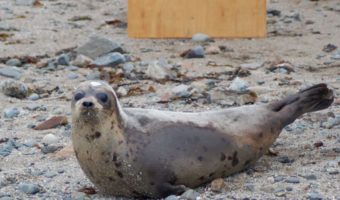 The Harp Seal is an aquatic mammal belonging to the Suborder Pinnipedia (fin-footed animals) and the Family Phocidae (true seals lacking external ears) that is found in the North Atlantic and Arctic Oceans. Harp Seals are separated into 3 populations based on where they breed, the White Sea, the West Ice and the Northwest Atlantic `Gulf’ and `Front’ populations, of which the Northwest Atlantic population near Newfoundland, Canada is the largest.

The fossil remains of Harp seals indicate they existed during the middle Miocene age, approximately 20 million years ago. Harp Seals apparently originated in the northern hemisphere and are derived from a stock of land-based flesh-eating mammals. 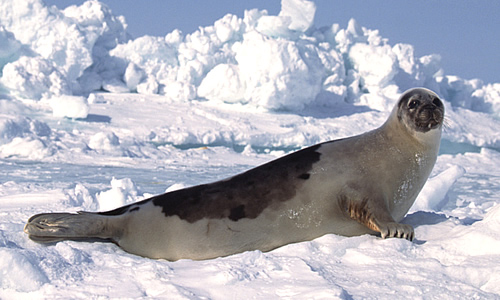 Harp seals owe their name to the irregular horseshoe-shaped band of black straddling the back in the adult male. This band, or ‘harp’, unites across the shoulders, curves down toward the abdominal region and the back up toward the posterior flippers where it abruptly disappears. The background color of the pelt is steel blue when wet and pale grey when dry.

The head and tail of the Harp seal are black, while the anterior flippers and belly are whitish. Adult females are similarly patterned, except that the ‘harp’, the head and the tail are usually somewhat lighter in color. Some adult females have irregular dark grey spots on the back with no clearly defined ‘harp’. Occasionally very dark ‘smutty’ seals are observed; these are generally males and are thought to be melanistic (darkly pigmented) color forms.

Male Harp Seals are only slightly larger than females, the average length (from the nose to the tip of the tail) of adult males is 169 centimetres and of adult females 162 centimetres. Weight ranges from 85 to 18 kilograms depending on time of year.

The Harp Seal spends most of its life in the sea, however, it also goes onto ice floes. Harp Seals are carnivores (meat-eaters). Harp Seals eat mostly fish and crustaceans. Seals do not chew their food, they swallow it in large chunks. They can crush the shells of crustaceans with their flat back teeth.

During spring, harp seals migrate north following the receding pack ice. Through their summer residence in the Arctic, harp seals reach as far north as Jones and Lancaster Sounds in the Canadian Arctic and Thule in northwestern Greenland. To reach these northern waters, harp seals must swim more than 3 200 kilometres. Small numbers also move westward into Hudson Bay, reaching Southampton Island and occasionally as far south as the Belcher Islands near James Bay. The southward migration begins just ahead of the formation of new Arctic ice and involves all adults and most juveniles. Some immature seals spend much of the winter in the Arctic, as tagged seals have been recorded at West Greenland in all months.

Each year, mature females (5 – 6 years old) give birth to a single pup, typically in late February. Pups weigh approximately 10 kilograms and are 80 – 85 centimetres long. Immediately after giving birth, the mother seal smells her offspring, and from that point on will only ever feed her own pup, whose scent she remembers. Harp Seal milk contains up to 50% fat, so pups gain over 2 kilograms per day when nursing, which lasts roughly 12 days. During this time the mother does not eat, and will lose up to 3 kilograms per day of body weight. 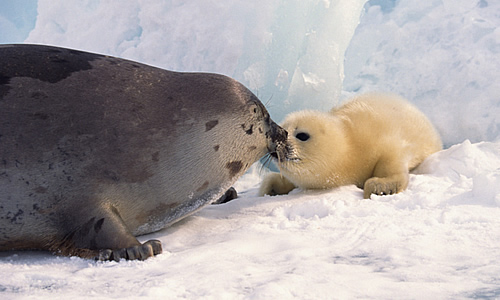 Weaning is very abrupt. The mother simply leaves and never returns. The stranded pup will cry at first and then become very sedentary to conserve body fat. Pups are unable to swim or find food until they are about 25 days old, leaving them very vulnerable to Polar Bears and humans during this time.

As mother Harp Seals wean their young, mature males (6 – 7 years old) roam around breeding with the females promiscuously. Courtship begins on the ice, however the actual mating takes place in the water. Harp Seals have delayed implantation, meaning the fertilized egg becomes an embryo, but does not implant in the uterus right away. The embryo will float around for about three and a half months before implanting and beginning to grow. This allows all the females to give birth within a very small time period each year, when the ice pack is available for giving birth and raising their young. Harp seals may live 35 years or more.

Harp seals are not considered to be threatened, although many are killed annually by hunters for fur. The population is estimated to be over two million.