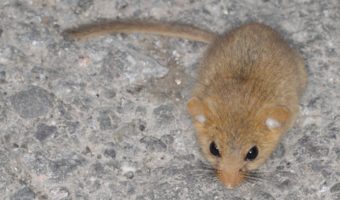 Dormice are nocturnal and hibernate from October to April. They are good climbers, and spend most of their time in the tree canopy.

The hazel dormouse is also known as the common dormouse and is native to northern Europe and Asia Minor.

Hazel dormice are the only small mammals in Britain to have a completely furry tail. The Hazel dormice can be distinguished from other mouse-sized mammals by their thick, bushy tail. They have orange/brown fur on their upper-parts, yellow/white under-parts and a white throat. Hazel dormice feed on seeds, flowers, fruits and insects. Nuts, including chestnuts, acorns and hazelnuts, are important food sources prior to hibernation.

In Britain, Hazel dormice are mainly found in the southern counties, although they are present in a few scattered locations in the Lake District and mid-Wales. Hazel dormice inhabit deciduous woodland with scrub, coppiced woodlands and hedgerows.

Hazel dormice are nocturnal creatures and spend most of their waking hours high among the branches of trees looking for food.

Hazel dormice will make long detours through the treetops rather than come down to the ground and expose themselves to danger.

In winter, Hazel dormice hibernate in nests beneath the leaf litter on the forest floor. When they wake up in spring, they build woven nests of honeysuckle bark and fresh leaves in the undergrowth.

If the weather is cold and wet and food scarce, Hazel dormice save energy by going into torpor whereby they curl up into a ball and go to sleep. Hazel dormice, therefore, spend a large proportion of their lives sleeping, either hibernating in winter or in torpor in summer.

Hazel dormice rear one or two litters a year, typically of four young (although the litter size can range from 1 – 7). The young first leave the nest after four weeks, but they may remain with their mother for a further seven weeks. Hazel dormice have a life span of around 5 years.

Hazel dormice are in the Lower Risk category of the 2000 IUCN Red List. In Britain they are protected by law and may not be killed, injured, disturbed in their nests, collected, trapped or sold except under licence. A loss of suitable habitat in Britain has led to a steep decline in their numbers.