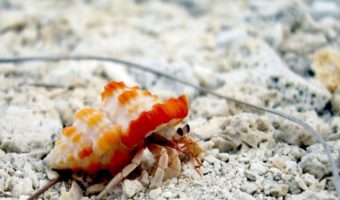 Hermit crabs are decapod crustaceans of the superfamily Paguroidea, not closely related to true crabs.

Most hermit crabs salvage empty seashells to shelter and protect their soft abdomens, from which they derive the name ‘hermit’. There are about five hundred known species of hermit crabs in the world, most of which are aquatic.

Hermit crabs live at a range of depths from shallow coral reefs and shorelines to deep bottoms, although some species are terrestrial.

A number of species, most notably king crabs, have abandoned seashells for a free-living life. These species have forms similar to true crabs and are known as ‘carcinised hermit crabs’. Hermit crabs live in the wild in colonies of 100 or more and do not thrive in smaller numbers. 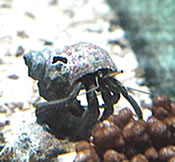 As hermit crabs grow, they must exchange their shell for a larger one. Hermit crabs have a hard exoskeleton that protects all of the body except the abdomen. The reason they seek out shells is because their abdomen is very soft and vulnerable to predators. There is frequently strong competition with hermit crabs fighting over available abandoned shells.

A hermit crab with a shell which is too small can not grow as fast as hermit crabs will well-fitting shells and is more likely to be eaten.

Terrestrial hermit crabs begin their lives in the sea but, through a series of molts, develop the ability to breathe air. After the last developmental molt, the young hermit crab will drown if left in water for an indefinite period of time. Their link with the sea is never entirely broken, however, as hermit crabs carry a small amount of water in their shells at all times to keep their abdomen moist and their modified gills hydrated.

For some larger marine hermit crab species, having one or more sea anemones (a group of water dwelling, predatory animals of the order Actiniaria) growing on the shell can be very useful, because the anemones tend to scare away fish and other marine predators which might otherwise attack the crab. The sea anemone also benefits because it is well-positioned to consume loose fragments of the hermit crabs meals. Because of this mutualism (a biological interaction between individuals of two different species), sea anemones can be, and sometimes are, transferred to a new shell when the hermit crab changes shells.

In some hermit crabs, fertilization occurs internally, while in others, fertilization is external and occurs at the moment of egg-laying. The developing eggs are attached to the abdominal swimmerets present only in the females. A female is able to carry several thousand eggs into the water.

The newly hatched hermit crabs are known as larvae. These young crabs live as microscopic plankton for several weeks before settling on the bottom and searching for a shell to inhabit.