You are here: Home / Animals / Heron 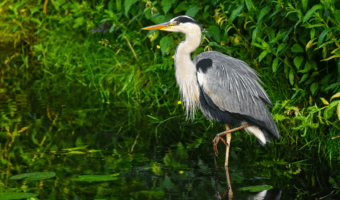 Herons are long-legged and long-necked birds in the family Ardeidae. There are at least 64 species, although some of which are referred to as egrets or bitterns rather than herons. They are split into three subfamilies — Tigriornithinae, Botaurinae and Ardeinae.

Herons are often confused with egrets; egrets do not form a biologically distinct group from herons, and tend to be named differently because they are mainly white, especially in the breeding season. Despite this, herons and egrets can occur in the same genus together.

Herons are found worldwide, on all continents except Antarctica. They are freshwater and coastal birds that usually reside around wetlands, lakes, and ponds. Most species are at least partially migratory.

The two main genera for these birds are Ardea and Egretta, although the correct placement of the species is often argued over. The best known of the herons are members of the genus Ardea, such as the North American great blue heron, with a wingspan and the similar but slightly smaller gray, or common, heron, which is widespread in the Old World. The largest heron is the goliath heron of Africa.

Members of the genus Egretta include the tricolored heron of the southeastern United States and Central America and South America, and the little blue heron. The green heron is also widespread across North America.

These large birds are some of the most common in the world and most species are classified as Least Concern on the IUCN Red List. In a few species are considered endangered or critically endangered, and some species are become extinct in recent years. They are mostly threatened by loss of habitat. 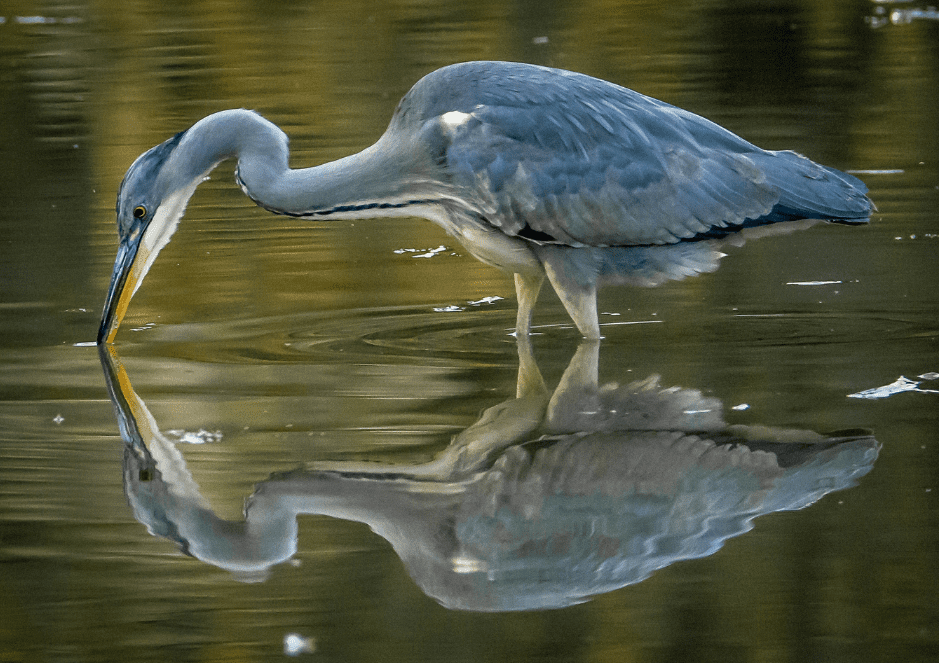 Herons are medium to large sized birds that are characterized by their long legs and necks. The smallest species is considered to be the dwarf bittern and usually measures between 25 to 30 cm (10 to 12 in) in length, and the largest species of heron is the goliath heron, which stands up to 152 cm (60 in) tall.

The long necks of these birds are able to take many different shapes; they can be retracted and extended, which, unlike other birds, they do in flight, and it can also kink in an S-shape thanks to their cervical vertebrae, of which they have 20 to 21. The neck is longer in the day herons than the night herons.

Although herons resemble birds in some other families, such as the storks, ibises, spoonbills, and cranes, they differ from these in flying with their necks retracted, not outstretched. In flight, the legs and feet are held backwards. Their feet have long, thin toes, with three forward pointing ones and one pointing backwards.

Heron’s feathers are soft and the plumage is usually blue, black, brown, grey, or white, and can often be strikingly complex. They are one of the only bird groups that have powder down. These birds have wings that are broad and long, with the wingspan of the goliath heron measuring 7 feet and 7 inches.

They have a long bill that is harpoon-like and can vary from extremely fine to thick, depending on the species. The bill, along with other bare parts of the body, is usually yellow, black, or brown in color, although this can vary during the breeding season. 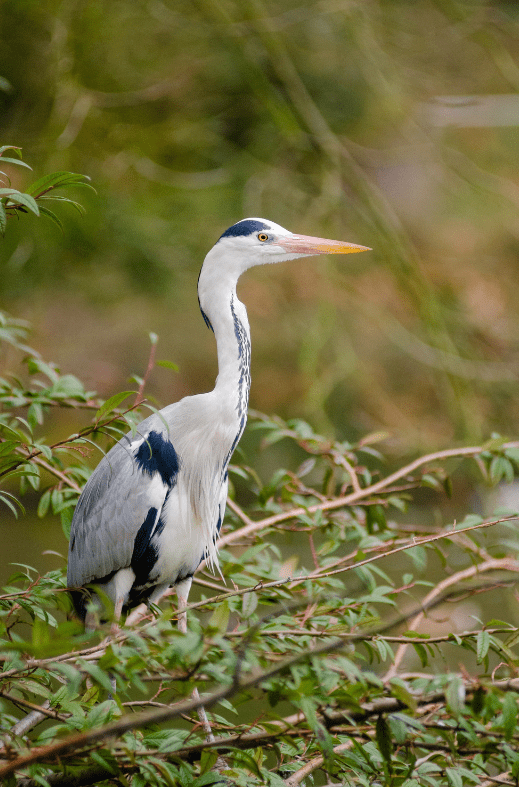 Herons have an average lifespan of between fifteen and twenty years. Despite this being a fairly long life expectancy, many chicks do not survive their first year of life.

Herons are carnivorous feeders. These birds usually feed on small fish, reptiles, amphibians, crustaceans, mollusks, and aquatic insects. Some larger species of this bird may take birds and bird eggs and rodents, too.

They feed around the shore line and will wade into shallow water to find prey. Once prey is in their eyesight, they will strike at it quickly with their beak. They may use their wings to frighten their prey, or even use bait to lure their prey towards them.

Heron’s behavior varies based on whether they are a day or night bird. The day herons feed during the day with their long necks stretched out into the water, while night herons feed at night with their short legs and thicker bills.

Herons are sociable birds when nesting, although outside of the breeding season may be seen alone. A group of them is called a “siege.”

Reproduction usually varies depending on the heron species, but most are monogamous and have one breeding season. Some species are solitary nesters, although most are colonial nesters and colonies can contain several species, as well as other species of waterbirds.

Males usually arrive at a nest site first and begin building a nest, which they then display to attract females. The nests of herons are usually found near or above water, particularly in trees. Although the nests of a few species have been found on the ground where suitable trees or shrubs are unavailable, they are typically placed in vegetation.

Males display with visual cues such as ruffling their plumage and flying around. Once the female has chosen an appropriate mate, the pair produces between three and seven eggs. The incubation period lasts several weeks and, once hatched, both parents care for the young and share incubation and feeding duties.

It can take between two and three months for chicks grow their full flight feathers and become more independent.

Herons are a cosmopolitan species that have worldwide distribution. They are found on all continents except Antarctica and are present in most habitats except the coldest extremes of the Arctic, extremely high mountains, and the driest deserts.

They reside near water sources such as lakes, rivers, swamps, ponds, and the sea and are classed as non-swimming waterbirds. They construct a large platform of sticks in bushes, cliffs, or trees. These nests are part of larger colonies called heronries or rookeries.

Herons are pretty nomadic birds that move from place to place. Most species are at least partially migratory. Southern populations reside in a similar place all year round, while the northernmost populations tend to move south for the winter where the water will not freeze over and prevent them from feeding. The distance in which they will travel will vary, though.

Herons are widespread throughout their areas, and are actually some of the most common waterbirds around the world. They are currently listed as Least Concern on the IUCN Red List.

Despite this, a few species, such as the white-bellied heron of the Himalayas and the Madagascar pond heron, are endangered or critically endangered and a few species have become extinct in recent times.

These birds are mostly threatened by the loss of their habitat, due to humans and climate change. They can also be affected by water pollution.

Adult herons have very few predators thanks to their large size. Despite this, young herons are often killed and many do not make it to a year old. They are eaten by raccoons, hawks, eagles, ravens, crows, bears and vultures.

There are at least 64 species of herons, egrets, and bitterns in the family Ardeidae. These are split into 18 genera, which are placed in three subfamilies — Tigriornithinae, Botaurinae and Ardeinae.

Where does a heron live?

Herons live worldwide, in wetland regions near lakes, rivers, swamps, ponds, and the sea. Most of these birds are nomadic and don’t have a permanent home.

What does a heron eat?

They are carnivorous and eat a wide variety of aquatic animals, including fish, reptiles, amphibians, crustaceans, molluscs, and aquatic insects.

What is the difference between a heron and an egret?

Egrets are members of the heron family. There is little difference between the two — the biggest difference is the egret has a white or buff plumage.

Most of these birds are migratory, although the distance that they migrate depends on whether they reside mostly in the north or south. Most herons will migrate to warmer areas in the winter.