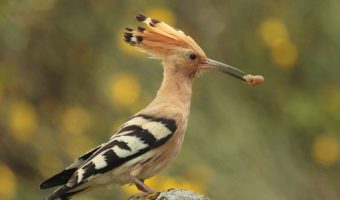 The African Hoopoe (Upupa africana) is an African bird that belongs to the Family: Upupidae which also includes the Eurasian Hoopoe (Upupa epops) although these are two separate species.

The African Hoopoe differs from the Eurasian Hoopoe by the coloration of the males, females are similar in appearance. The male African Hoopoe has richer cinnamon coloration on its upperparts, lacks the subterminal white band on the crest and has all black primaries. Habits and vocalisations in both species are the same.

Use the information below to find out more about the Hoopoe Bird’s characteristics, habitat, diet, behaviour and reproduction.

The African Hoopoe is an exotic looking bird that is around the same size as a Starling. The African Hoopoe measures 25 – 29 centimetres in length, weighs 57 grams and has a wingspan of 44 – 48 centimetres. Their plumage is a cinnamon color with contrasting black and white stripes on their wings and tails. Their underparts, head, throat and back are also cinnamon in color.

The African Hoopoe’s wings are broad and rounded and they have a square shaped tail which is black and shows a wide white band. Their heads have a distinctive crest with long chestnut colored feathers which have black tips. The crest lies backwards when the bird is resting, however, if alarmed or excited, the crest opens up and displays a beautiful circular shape.

The Hoopoe’s beak is black, long and slender and slightly downward curved. Their eyes are small, round and brown in color and their short legs and feet are grey. As with most bird species, the female Hoopoe is duller in appearance and chicks resemble the female but have shorter crests.

The African Hoopoe bird has an oil gland which produces a foul smelling secretion.

African Hoopoes live in open, bushy regions, thornveld and riverine woodlands in dry areas. They can also be found in parks and surburban gardens. These birds nest in cavities such as holes or crevices in tree trunks, however, they have also be known to nest in buildings, abandoned termite nests, nest boxes, piles of boulders and even under houses. They may use the same nest for many years. Nests are generally lined with grass, debris or dried manure.

Hoopoes are well known for their dirty nests which are smelly due to non-removal of droppings.

The African Hoopoe is a forager and forages through leafs with its long, thin beak. It mainly eats insects and earthworms off the ground, however, before it actually eats the insect, the Hoopoe will bang the insect on the ground to remove legs and wings and then toss it up into the air before catching it in its open beak.

African Hoopoes will also eat frogs, small snakes, lizards and also seeds and berries in small quantities. They also eat insect pupae or larvae which they consume by probing the ground with their beak.

African Hoopoes are vocal birds and have a distinctive call which sounds like ‘Hooo Pooo’ and is repeated 3 – 5 times each time it calls.

African Hoopoes have there own defence technique whereby they will lie flat to the ground, spreading their tail and wings and pointing their beak straight upwards if they are being attacked by a predator.

In flight, Hoopoes are low fliers with an erratic flight pattern and irregular wing beats, however, if being preyed upon by a bird of prey, it can soar very high in order to escape its predator.

The female Hoopoe lays around 4 – 7 eggs which are blue/green in color but quickly become brown. The female incubates the eggs for 14 – 20 days. Chicks are born helpless, naked and blind with a sparse long white down. The chicks are fed mainly by the male and then later by both parents. The chicks fledge at around 26 – 32 days. one to three broods are produced yearly by Hoopoe birds.

The African Hoopoe bird is classed as ‘Least Concern’ by the IUCN.