You are here: Home / Animals / Horses 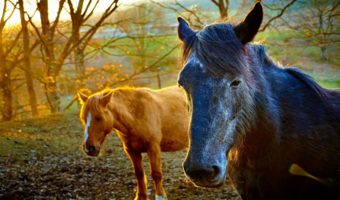 A Horse (Equus caballus) is a large odd-toed ungulate mammal, one of ten modern species of the genus Equus. Equus comes from the ancient Greek word meaning quickness. Horses are mammals in the same family as zebras, mules and donkeys.

Most breeds of horses are able to perform work such as carrying humans on their backs or be harnessed to pull objects such as carts or plows. However, horse breeds were developed to allow horses to be specialized for certain tasks. Lighter horses were bred for racing or riding, heavier horses for farming and other tasks requiring pulling power. Some horses, such as the miniature horse, can be kept as pets.

The horse plays a prominent role as a figure in the ideals of religion and art and plays an important role in transportation, agriculture and warfare. Horses also feature in stories about mythological creatures – like Pegasus for example.

Horses come in lots of different colors and shades – take a look at some of these colors below:

There are lots of different names for the horse hierarchy system, take a look at these:

a horse of either sex less than one year old. A nursing foal is sometimes called a suckling and a foal that has been weaned is called a weanling. Most domesticated foals are weaned at 4-6 months of age.

a horse of either sex that is between one and two years old.

a male horse under the age of four.

a female horse under the age of four.

a non-castrated male horse four years old and older. Some people, particularly in the UK, refer to a stallion as a ‘horse’.

A castrated male horse of any age, though for convenience sake, many people also refer to a young gelding under the age of four as a ‘colt’.

is the word used for the father of a horse.

is the word used for the mother of a horse.

Depending on breed, management and environment, the domestic horse today has a life expectancy of 25 to 30 years. It is uncommon, but a few horses live into their 40s and occasionally, beyond. The oldest verifiable record was ‘Old Billy’, a horse that lived in the 19th century to the age of 62. In modern times, Sugar Puff, who had been listed in the Guinness Book of World Records as the worlds oldest then-living pony, died at age 56.

Regardless of a horses actual birthdate, for most competition purposes, horses are considered a year older on January 1 of each year in the northern hemisphere and August 1 in the southern hemisphere. The exception is endurance riding, where the minimum age to compete is based on the horses actual calendar age.

Horses that work or travel on hard roads need their feet (hooves) protected by metal shoes. Horses hooves, like our finger and toe nails, also grow continuously and need to be trimmed. To do this, the horses shoes need to be removed and their hooves trimmed every 4 – 6 weeks. After trimming their hooves new shoes are fitted. The person who cares for a horses feet is called a blacksmith.

How Horses are measured

Horses are measured by the width of a human hand – 4 inches or 10 centimetres. Measurement is taken from the ground up to the withers, the highest point on the horses shoulder.

There are 4 natural paces of a horses movement:

A bit quicker than a walk, but still gentle and casual.

High speed – lots of energy – make sure you hang on.

Gait – any forward movement of the horse.

Walk – the horse raises its feet one after the other and puts them down in the same order (4 miles per hour).

Trot or Jog – the horse lifts the front leg on one side of its body and the hind leg on the other side at the same time. The other two legs hit the ground together. The trot is faster than the walk. (9 miles an hour).

Canter – the horse gathers its hind legs under its body and extends its forelegs. It is a controlled gallop. At one point, all four feet are off the ground. (12 – 40 miles an hour).

Gallop – the horse gallop is the fastest movement – the horse gathers both hind legs and forelegs under its body simultaneously and flys through the air.