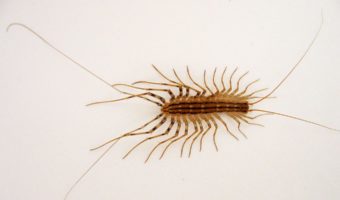 The House Centipede (Scutigera coleoptrata) is a yellowish grey centipede with 15 pairs of legs. Originally native to the Mediterranean region, the species has spread to other parts of the world, where it usually lives in human homes. The House Centipede is an insectivore that kills and eats insects.

The House Centipede, when fully grown, has 15 pairs of very long, delicate legs and a rigid body, which enables it to run with surprising speed up walls and along ceilings and floors. Its body is yellowish grey and has three dark-colored dorsal stripes running down its length. Their legs also have dark stripes.

In an act of defence, when one of the house centipedes legs is held down, it drops that leg in hopes that the attacker will be distracted by the temporarily twitching appendage. Unlike most other centipedes, House Centipedes and their close relatives have well-developed, faceted eyes.

House centipedes feed on bedbugs, termites, cockroaches, silverfish, spiders and other household pests. They kill their prey by injecting venom through their fangs and then eating the dead prey.

House centipedes lay their eggs in the spring. The average centipede lays around 63 eggs and a maximum of around 151 eggs. They have as few as four pairs of legs when they are hatched. With each molting, they gain a new pair. They live anywhere from 3 to 7 years, depending on the environment.

Outdoors, house centipedes prefer to live in cool, damp places. Most live outside, primarily under large rocks, piles of wood and especially in compost piles.

Within the home, these centipedes are found in almost any part of the house, most commonly, they are encountered in basements, bathrooms and lavatories, where there is a lot more water, but they can also be found in dry places like offices, bedrooms and dining rooms.

The greatest likelihood of encountering them is in spring, when they come out because the weather gets warmer and also in Autumn, when the cooling weather forces them to find shelter in human habitats.

Unlike its shorter-legged but much larger tropical cousins, the house centipede can live its entire life inside a building.

Because they eat household pests, house centipedes are considered among the most beneficial creatures that inhabit human dwellings, but because of their alarming, frightening appearance and painful bite, few homeowners are willing to share a home with them. They do not cause damage to food or furniture.

The house centipede is capable of biting a human, but this seldom occurs. When it does, it is no worse than a minor bee sting. The worst one can usually expect from a house centipedes bite is some pain and a slight swelling at the location of the bite. The symptoms generally disappear within a few hours. However, the bite can cause health problems for those few who are allergic to the extremely mild venom of its bite, which is similar to that of most normal centipedes.

The house centipedes venom is too weak to cause any serious harm to larger pets such as cats and dogs.