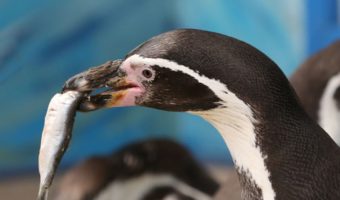 The Humboldt Penguin is a South American penguin, breeding in coastal Peru and Chile. This penguins nearest relatives are the African Penguin, the Magellanic Penguin and the Galapagos Penguin. The Humboldt Penguin is named after Alexander von Humboldt, a naturalist and explorer who first described the animal to western observers. 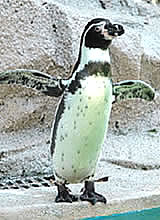 Humboldt Penguins are medium-sized, black and white penguins, growing 65 – 70 centimetres tall. Humboldt Penguins have a black head with a white border running from behind the eye, around the black ear-coverts and chin, to join on the throat.

Humboldt Penguins have blackish-grey upper parts and whitish under parts, with a black breast-band extending down the flanks to the thigh. They have a fleshy-pink base to their beaks. Juveniles have dark heads and no breast-band.

Humboldt penguins are social animals, living in relatively large colonies, where communication is important. Colonies are beneficial because they provide collective defence against predators.

Mated penguins can recognize one another through vocal and visual mechanisms within the colony. Parents and offspring can also recognize each other easily using sight and sound. Each penguin has a unique voice which allows its mate and offspring to recognize it.

Humboldt penguins have a body made to swim. Using their strong wings, they ‘fly’ underwater, usually just below the surface, at speeds of up to 20 miles per hour (32 kilometres per hour). Humboldt Penguins steer with their feet and tail. Their feathers are stiff and overlap to waterproof and insulate their body. Dense feathers also protect the penguin in winds of up to 60 miles per hour (96 kilometres per hour). Humboldt penguins, like all penguins, can see easily underwater and on land. Also, these birds have a supraorbital gland which enables them to drink salt water in addition to fresh water. The gland withdraws excess salt from the penguins blood and excretes it in a concentrated solution which dribbles down the beak. In zoos, Humboldt penguins usually live in fresh water and as a result the gland is dormant. Living only in fresh water does not affect the penguins health.

Humboldt penguins can breed at any time of the year. Sexual maturity is reached between 2 and 7 years old. Nests are made in caves, cracks or holes and occasionally in more open sites such as rocky shore.

Humboldt penguins usually dig burrow-like nests among piles of guano (accumulated droppings of sea birds) which forms in caves and along cliffs. Females lay one or two eggs and the incubation period is approximately 40 days. Both parents take turns incubating the eggs. At times, only one chick survives because hatching is staggered and one chick may be smaller than another. When food is scarce the parents feed only the larger chick and the smaller chick quickly starves.

Chick care begins with parents alternating jobs of sitting with the chick and hunting for food. After about two months, the chick is left alone during the day while both parents hunt for food. Chicks are born with greyish brown, downy feathers then molt into completely grey feathers when they fledge. Humboldt penguin chicks fledge at about 70 – 90 days.

Approximately one year after chicks fledge, they molt into adult feathers. Adult penguins have a white front and a brownish-black back and head. They also have a dark stripe across the chest and a white mark circling above each eye and forward around the neck.

In addition to natural predators, such as gulls, vultures, caracaras, foxes, pinipeds and cetaceans, Humboldt penguins also face a number of man-made hazards. Commercial fishing reduces breeding success and survival rates through depletion of food resources. Over-fishing of the Peruvian Anchovy (Engraulis ringens) led to its population collapse in the 1970s. This fish was a major component of the Humboldt penguins diet and penguin populations suffered as a result.

Hundreds of Humboldt penguins are also caught and drowned in the nets of local fishermen every year. Accidental entanglement in gill-nets and the deliberate hunting of adults for food and fishing bait, are the main causes of adult mortality in some areas. Eggs are also taken from many breeding colonies, resulting in disturbance and reduced breeding success.

The current status of the Humboldt Penguin is vulnerable, due to a declining population caused in part by over-fishing. Historically it was the victim of guano over-exploitation. The current population is estimated at between 3,300 and 12,000.