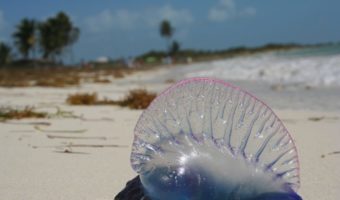 Hydrozoa is a taxonomic class of very small, predatory animals which can be solitary or colonial and which mostly live in saltwater. A few genera within this class live in freshwater.

These organisms are related to jellyfish and corals and belong to the phylum Cnidaria. Hydrozoans may be solitary or colonial and are extremely diverse, both in life cycle forms and morphology. Most hydrozoan species have both a polyp (one of two forms of individuals found in many species of cnidarians) and medusa stage (medusae vary from bell-shaped to the shape of a thin disk, scarcely convex above and only slightly concave below), but others make use of only one or the other.

Some examples of hydrozoans are:

Hydra – a genus of simple, fresh-water animals possessing radial symmetry. Hydra can be found in most unpolluted freshwater ponds, lakes and streams in the temperate and tropical regions by gently sweeping a collecting net through weedy areas. Hydra are usually a few millimetres long and are best studied with a microscope.

Obelia (species: Obelia dichotoma, Obelia geniculata, Obelia longissima, Obelia bidentata) – a genus in the class Hydrozoa, which consists of mainly marine and some freshwater species and have both the polyp and medusa stages in their life cycle. The genus belongs to the phylum Cnidaria, which are all aquatic and mainly marine organisms that are relatively simple in structure. The Obelia are naturally found underwater in the ocean throughout the world.

Portuguese Man O’ War (Physalia physalis) – also known as the bluebubble, bluebottle or the man-of-war, is commonly thought of as a jellyfish but is actually a siphonophore, a colony of specialized polyps and medusoids. The Portuguese Man O’ War has an air bladder which is an internal organ that contributes to the ability of a fish to control its buoyancy.

It enables the Portuguese Man O’ War to stay at the current water depth, ascend, or descend without having to waste energy in swimming.

The air bladder is known as the ‘pneumatophore’ or ‘sail’. The Portuguese Man o’ War has no means of propulsion and is pushed by the winds and the current. Their bladder must stay wet to ensure survival. Every so often it may roll slightly to wet the surface of the float. To escape a surface attack, the pneumatophore can be deflated allowing the Man O’ War to briefly submerge.

Below the main body dangle long tentacles, sometimes reaching 10 metres (33 feet) in length below the surface, although 1 metre (3 feet) is the average. They sting and kill small sea creatures such as small fish and shrimp using venom-filled nematocysts. The sting from the tentacles is dangerous to humans. These stings have been responsible for several deaths, however, they usually only cause excruciating pain. Detached tentacles and specimens which wash up on shore can sting just as painfully as the intact creature in the water for weeks after their detachment. The venom can travel up to the lymph nodes and may cause, depending on the amount of venom, more intense pain. In extreme cases medical attention is necessary.

Research suggests that the best treatment for a sting is to apply hot water (45°C/113°F) to the affected area, which eases the pain of a sting by denaturing the toxins. Ice is also effective at suppressing the pain through reducing the activity of the toxins and reducing the sensation and therefore pain of the area of skin around the ice. Additionally, ice constricts blood vessels, reducing the speed at which the venom travels to other parts of the body.

The Portuguese Man O’ War is often confused with a jellyfish, which is incorrect and may lead to improper treatment of stings, as the venom is different. A second sting may lead to an allergic reaction.

The Loggerhead Turtle, which is apparently immune to Man O’ War toxins, is commonly seen feeding on the Man O’ War. The sea slug ‘Glaucus atlanticus’ (species typically grows to 4 centimetres in length and is dark blue in color) also feeds on the Man O’ War.