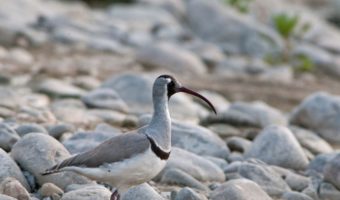 The Ibisbill belongs to the order Charadriiformes which includes Plovers, Terns, Gulls and Sandpipers.

The Ibisbill is a wading shorebird that breeds across southern Central Asia from Kazakhstan to North West China and south to North West India.

There are no subspecies of Ibisbills.

Use the information below to find out more about the Ibisbill’s characteristics, habitat, diet, behaviour and reproduction.

These distinctive birds have a grey plumage and a white belly. Their long legs are crimson in breeding adults, green in non-breeding adults and pale grey in juveniles. Ibisbills have shorter legs than their familial relatives the Avocets and Stilts. The Ibisbill has three toes which point forward, the hind toe is absent. The outer and middle toes are semi-webbed.

The Ibisbill’s red beak is unique in that it curves downwards to enable the bird to probe in the mud and gravel of streams for food. The beak measures between 6 – 8 centimetres (2.5 – 3.4 inches), female beaks are slightly longer than the males.

The Ibisbill prefers stony riverbeds and shingle riverbanks in high zones of Central Asia and the Himalayan and Tibetan Plateau valleys, typically between 1,700 and 4,400 metres (5,600 and 14,400 feet), although there are records of the Ibisbill breeding as low as 500 metres (1,600 feet).

The Ibisbill is typically found in shingle-bed river valleys from 100 to 1,500 metres (330 to 4,900 feet) across with patches of silt and sand mixed in with stones, pebbles, rocks and small boulders and very little vegetation. The Ibisbill needs to live near slow moving water preferably on slopes in order to feed.

The Ibisbill hunts for food by probing its long beak in to mud, river gravel or under rocks. It feeds on land and water invertebrates including Mayfly larvae and Caddisfly that are found under boulders in streams. They will also eat fish and insects such as Grasshoppers.

Ibisbills are vocal birds and produce a ringing ‘klew klew’ call. Like most shore birds in flight, the Ibisbill flys with its long neck out-stretched and its rounded wings extended outwards.

Ibisbills are generally solitary birds particularly during Autumn and Winter although some may be found in small groups of 5 – 8 birds. These long beaked wading birds are quite human fearless. They are also good swimmers and tend to cross rivers by swimming rather than flying.

Ibisbills are quite inactive birds while wintering, becoming increasingly noisy and more active when breeding season approaches. The Ibisbill’s young and its territorial behaviour are similar to that of the Oystercatchers.

Ibisbills breed solitary and are also known to be monogamous, pairing up with a single mate, sometimes for the duration of a breeding season. During the breeding season, the Ibisbill is known to run short distances while holding its head downwards, only standing upright to look at its surroundings.

Ibisbill nests are shallow depressions in the ground located on riverbanks or on islands and lined with small pebbles. Around 2 – 4 oval eggs are laid in the nests around the end of April. Both parents share incubation duties. The life span of an Ibisbill is around 15 years.

Ibisbills are classed as ‘Least Concern’ by the IUCN. This remarkable bird has a very large range at an estimated 1.9 million square miles and there is no evidence that their population is in decline.