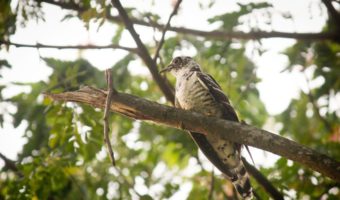 The Indian Cuckoo is found widely across Asia from Pakistan to India, and Sri Lanka, Indonesia, China and Russia.

Use the information below to find out more about the Indian Cuckoo’s characteristics, habitat, diet, behaviour and reproduction.

The Indian Cuckoo is a medium sized bird who measures around 30 centimetres (13 inches) in length. It is greyish/brown in color with broad black barring on its underparts which is narrower on the female.

The Indian Cuckoo’s tail has dark colored barring with white tips. Their beaks are small and around their eyes are yellow eye-rings. The iris is light brown to reddish.

These Cuckoos have orange feet. Although males and females are similar in appearance, females differ slightly in that they are more paler in color on the throat and they have more brown coloring on the breast and tail.

The Indian Cuckoo lives in forests and open woodland in zones as high as 3,600 metres. Their preferred habitat is deciduous and evergreen forests but they also occur in garden lands and thick scrubs.

Indian Cuckoos feed up on hairy caterpillars and other insects. They will also sometimes eat fruit. Indian Cuckoos tend to feed in the upper canopy of forests where they air-feed on flying termites. It prefers leafy trees for foraging.

Indian Cuckoos have a loud call which mainly consists of four notes described as a ‘bo-ko-ta-ko’.

The Indian Cuckoo is a shy, solitary bird who migrates south during winter.

Indian Cuckoo breeding season varies from May to July in northern China, March to August in India, January to June in Burma and January to August in the Malay Peninsula.

The Indian Cuckoo is a brood parasite who lays a single egg in other bird’s nests such as Crows and Drongos nests. It will eat the other bird’s eggs before laying its own. Eggs hatch following an incubation period of 12 – 14 days depending on region.

Cuckoo chicks have white markings on their crown and a white throat and chin which contrasts with its dark colored face. They are browner in color with broad white tips on their heads and wing feathers. Nestlings have a orange/red mouth and yellow flanges to the gape (interior of the open mouth).

The Indian Cuckoo is classed as ‘Least Concern’ by the IUCN.