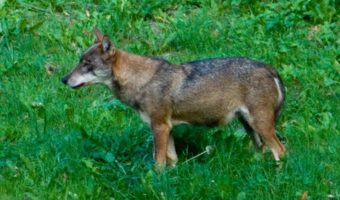 The Italian Wolf (Canis lupus italicus) also known as the Apennine Wolf, is a subspecies of the Grey Wolf found in the Apennine Mountains in Italy.

It was first described in 1921 and recognised as a distinct subspecies in 1999. Recently due to an increase in population, the subspecies has also been spotted in areas of Switzerland.

During recent years, Italian wolves have also established themselves in Southern France, particularly in the Parc National du Mercantour. It is federally protected in all three countries. 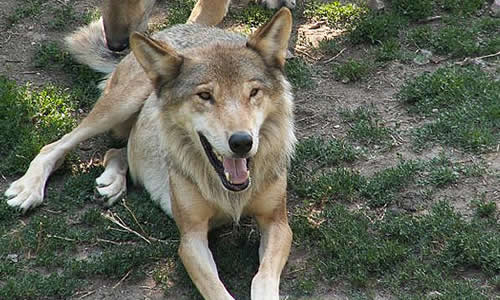 The Italian Wolf is a medium wolf. Male Italian Wolves have an average weight of 24 – 40 kilograms (53 – 88 pounds), with females usually being 10% lighter. The body length of the Italian Wolf is usually 100 – 140 centimetres (39 – 55 inches). Their fur color is commonly blended grey or brown, though black specimens have recently been sighted in the Mugello region and the Tuscan-Emilian Apennines.

The Italian Wolf is a nocturnal hunter which feeds primarily on medium sized animals such as Chamois, Roe Deer, Red Deer and Wild Boar. In the absence of such prey items, its diet will also include small animals such as hares and rabbits. An Italian wolf can eat up to 1,5 – 3 kilograms of meat a day. The Italian Wolf will occasionally consume berries and herbs for roughage. The Italian Wolf has adapted well in some urbanised areas and as such, will usually not ignore refuse or domestic animals.

Due to a scarcity of large prey, wolf packs in Italy tend to be smaller than average. Packs are usually limited to a nuclear family composed of a reproducing alpha pair, young sub adults which remain with their birth family until they are old enough to disperse and produce cubs. However, in areas where large herbivores such as deer have been reintroduced, such as the Abruzzo National Park, packs consisting of 6 – 7 individuals can be found.

Starting from the 1970s, political debates began favouring the increase in wolf populations. A new investigation began in the early 1980s, in which it was estimated that there were now approximately 220 – 240 animals and growing. New estimates in the 1990s revealed that the wolf populations had doubled, with some wolves taking residence in the Alps, a region not inhabited by wolves for nearly a century. Current estimates indicate that there are 500 – 600 Italian wolves living in the wild. Italian Wolf populations are said to be growing at a rate of 7% annually.

Wolves migrated from Italy to France as recently as 1992. The French wolf population is still no more than 40 – 50 strong, however, the animals have been blamed for the deaths of nearly 2,200 sheep in 2003, up from fewer than 200 in 1994. Controversy also arose when in 2001, a shepherd living on the edge of the Mercantour National Park survived a mauling by three wolves. Under the Berne Convention wolves are listed as an endangered species and killing them is illegal. Official culls are permitted to protect farm animals so long as there is no threat to the Italian Wolf.