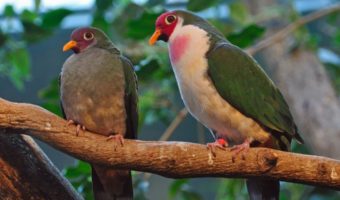 The Jambu Fruit Dove measures 23 – 27 centimetres in length and weighs around 42 grams. It is a plump small-headed bird with soft feathers and very distinctive coloring including a white eye ring, orange bill and red legs and is close to the size of a Barbary Dove. Their call is a soft, low coo.

The adult male Jambu Fruit Dove has a crimson face with a black chin, unmarked green upperparts and white underparts, with a pink patch on the breast and a chocolate brown undertail.

The Jambu Fruit Dove is a shy and inconspicuous bird, camouflaged against the forest canopy by its green plumage. It is usually seen alone or in pairs, but a sizable flock may gather when feeding at a fruit tree.

The Jambu Fruit Dove eats fruit directly from the tree, or from the ground if items have been dropped by hornbills or monkeys.

Like other doves and unlike most birds the Jambu Fruit Dove can put its entire bill into the water and drink by sucking it in.

Most birds can only dip part of their bill in water, so as not to submerge their nostrils and then have to tip their heads up to let the water trickle down their throats.

The male Jambu Fruit Dove holds a breeding territory, advertised by raising its wings, bobbing its body and cooing. It will defend its territory with a quick peck if the territorial display fails.

The female builds a flimsy nest of twigs, roots and grasses, which are collected by her mate, in a tree and lays one or sometimes two white eggs which are incubated for about 20 days to hatching, with a further 12 or more days to fledging.

Both parents help in raising the hatchling. Within an hour of its birth, the helpless hatchling will be fed doves milk, a nutritious secretion that both parents make in their crops.

The chicks early development concentrates on growing feathers and becoming coordinated instead of growth. Around the 10th day its eyes open for the first time, but its wings will already be functional. Shortly after, it leaves the nest with its parents, who stay very close.

The chick is then weaned at 8 – 10 weeks. The young male will look a lot like a female in coloring, but by 9 months it will have its full coloring.

Extensive deforestation in Indonesia and Malaysia means that this dove is now threatened, although its ability to live in second growth and at higher elevation means that its situation is not as critical as that of some forest bird species.

The Jambu Fruit Dove is evaluated as Near Threatened on the IUCN Red List of Threatened Species.