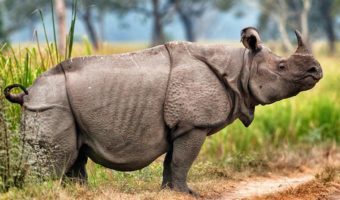 The Javan Rhinoceros (Rhinoceros sondaicus), is also known as the ‘Lesser One-horned Rhino’. It can be found in Western Indonesia and Eastern Indochina. The Javan rhinos habitats are tropical and subtropical moist broadleaf forests such as dense rainforests with mud wallows and plenty of water, showing a preference for low-lying sites.

The Javan rhinoceros is a dusky grey color and has a single horn, about 25 centimetres long, although it is noted that only the males have visible horns – the females have very short horns or no horns. The Javan rhinos skin is hairless and has a number of loose folds giving the appearance of being ‘armour plated’ just like the Indian rhino. 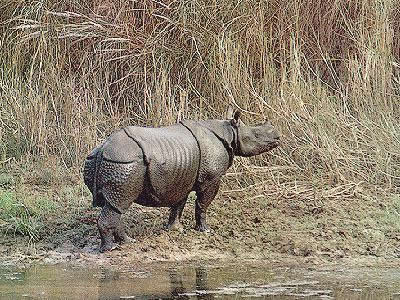 The Javan rhino is very similar in appearance to the closely-related Indian rhinoceros, however, it is slightly smaller, with a much smaller head and the skin folds less apparent than in the Indian rhino. The upper lip is pointed and prehensile and can be used to grasp food and bring it to the mouth.

The Javan rhinos food sources include shoots, twigs, young foliage and fallen fruit. The Javan rhinoceros grabs its food with its prehensile upper lip and knocks down saplings to reach the leaves, shoots and fruit.

Female Javan rhinos reach maturity at 3 – 4 years whereas males reach maturity much later – around 6 years of age. The reproduction rate of the Javan rhino is relatively low. A single calf is born to the female every 4 – 5 years, the young are suckled for up to 2 years.

With the exception of mothers and calves and mating pairs, the Javan rhino is a very solitary individual. However, they sometimes congregate at salt-licks and wallow sites.

There are 3 distinct subspecies, of which only 2 are presumed to be extant:

The Indonesian Javan Rhinoceros (Rhinoceros sondaicus sondaicus), once lived on Java and Sumatra. The population is now confined to around 40 – 50 animals in the Ujung Kulon National Park on the western tip of the island of Java.

The Vietnamese Javan Rhinoceros (Rhinoceros sondaicus annamiticus), or Vietnamese Rhinoceros, once lived across Vietnam, Cambodia, Laos and into Thailand and Malaysia. Annamiticus is derived from the Annamite Mountain Range in Southeast Asia, part of this subspecies range. A single population, estimated at less than 12 remaining rhinos, lives in an area of lowland forest in the Cat Tien National Park in Vietnam. Genetic analysis suggests that the two extant subspecies last shared a common ancestor between 300,000 and 2 million years ago.

The Indian Javan Rhinoceros (Rhinoceros sondaicus inermis), once ranged from Bengal to Burma, however, it is presumed to have gone extinct in the first decade of the 1900’s. Inermis means without horns, as the most distinctive characteristic of this sub-species is the small horns in males and lack of horns in females. The original specimen of this species was a hornless female. The political situation in Burma has prevented assessment of the species in that country, however, its survival is considered unlikely.

All three subspecies of Javan rhinoceros are classed as Critically Endangered. 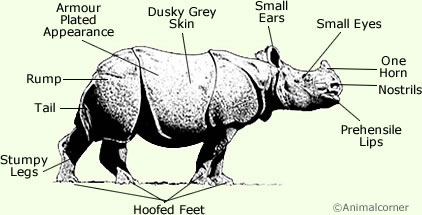 The main causes of the decline in numbers of the Javan Rhino have been habitat loss resulting from logging activities and development, combined with hunting for body parts, which are in demand for use in Oriental medicines. The two critically small populations are also vulnerable to disease, natural disasters, poaching and genetic problems caused by inbreeding.

At present, there are no Javan Rhinoceroses in captivity. Although they reside in protected areas, the above pressures are still effecting them greatly. Although park ranges have been increased and the resident countries have banned poaching and signed certain agreements not to trade in these animals, it may be too late to save this critically rare species.