You are here: Home / Animals / Jellyfish

Jellyfish are marine invertebrates belonging to the Scyphozoan class, and in turn the phylum Cnidaria. The body of an adult jellyfish is composed of a bell-shaped, jellylike substance enclosing its internal structure, from which the creatures tentacles suspend.

Jellyfish come in all different shapes and colours and range in size from 3 millimetres to 3 metres in diameter. 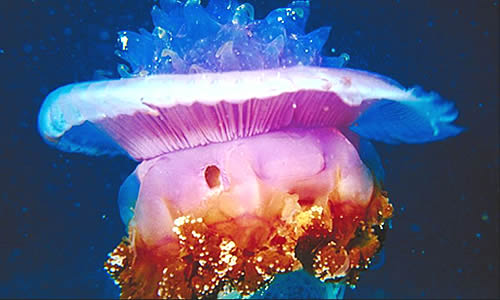 One species of jellyfish in the cold arctic sea is huge, its body can be more than 7 feet wide and its tentacles can be up to 120 feet long.

Although Jellyfish often appear clear or pale bluish in colour, they can also be yellow, deep blue, bright purple, pale lilac, bright orange, deep red. Some Jellyfish, when they are disturbed at night, give off a cold bright light called luminescence.

Jellyfish are made up of a layer of epidermis, gastrodermis and a thick jellylike layer called mesoglea that separates the epidermis from the gastrodermis.

If you have never been stung by a Jellyfish, then you are very lucky as they have a painful sting and some can even kill you. The tentacles on a Jellyfish are covered with stinging cells (cnidocytes) that sting or kill other animals: most jellyfish use them to secure prey or as a defence mechanism. Others, such as Rhizostomae, do not have tentacles at all.

Jellyfish have survived a long time in their watery habitats. Jellyfish have lived on earth for millions of years and can be found in all the oceans of the would. There are even some Jellyfish that live in fresh water lakes and rivers.

Jellyfish usually drift, however, occasionally you will see them swimming. Jellyfish swim by rhythmic pulsations of the umbrella or bell. The movement is very like an umbrella being open and shut slowly. It is coordinated by a very simple nervous system and by sense organs around the edge that are sensitive to light and gravity and chemicals in the water. Jellyfish are slow swimmers but speed and low water resistance are not important because they are drifters that feed on plankton. It is more important for them that their movements create a current where the water (which contains their food) is being forced within reach of their tentacles.

Most jellyfish are passive drifters that feed on small fish and zooplankton that become caught in their tentacles. Jellyfish also eat small animals such as shrimps. Some of the animals Jellyfish eat are microscopic, too small to be seen by the human eye. Jellyfish also eat other Jellyfish of other species. They catch their prey by using nematocysts, small stinging organs present in the tentacles and oral arms.

The complete lack of a brain means that the jellyfish cannot help but sting you – unless it is a Box Jellyfish (Chironex fleckeri) which can control itself efficiently, even without a brain. This Jellyfish has 3 million stinging cells every centimetre of its tentacles. The Box jelly is responsible for at least one death a year around Australia and has killed 67 people since records began in 1883, though the total is misleading since many deaths attributed to heart attacks or drowning could have been caused by toxic jellies.

If the stinging cells [nematocysts] of a jellyfish make contact with your skin they will release their poison into it.

Some kinds of Jellyfish stings are like miniature harpoons with barbs on the end that inject poison to paralyze their prey. Some Jellyfish have sticky harpoons and others wrap their harpoons around their prey to trap it.