You are here: Home / Animals / Killdeer 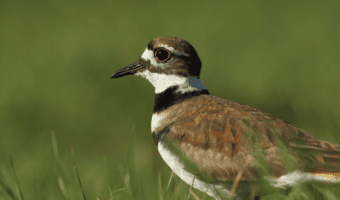 The Killdeer (Charadrius vociferus) is a plover-like bird, native to the Americas, found widely across Canada, the USA, Central and South America. In general, it is a small bird (large for a plover), brown and white with a black necklace.

It prefers to live by water and nests on the ground in open space where it can react quickly to any spotted threats. These birds are omnivores, living primarily on a diet of insects and seeds which it forages from wide open fields. Some populations are migratory, while others, mostly the subspecies that live in more central latitudes or islands don’t tend to travel far.

The killdeer has a very distinctive appearance. The feathers across its back and wings are a tan brown, sometimes with lighter, rufous tips to the feathers. Its bill is short and thick, black in color and the legs are a beige color sometimes with an orange tinge.

It has a white breast that stretches down to the tail, with two distinctive black horizontal bands across the chest. No other plover in North America has two breast bands. The tail is mostly brown, but does have one white and one black subterminal band.

There are three subspecies that exist across this range. The most widespread is the nominal subspecies (Charadrius vociferus vociferus), which can be found commonly throughout North and Central America. This sub-subspecies is migratory and often winters in South America.

(Charadrius vociferus ternominatus) is a subspecies native to some of the caribbean and surrounding islands of the Bahamas, the Greater Antilles, and the Virgin Islands. This subspecies is non migratory.

The final subspecies is (Charadrius vociferus peruvianus) which is native to Northern areas of South America, particularly Ecuador, Peru and northern parts of Chile.

Killdeers are usually found near open fields or prairies, where they can easily spot predators. They are diurnal birds, meaning they are active during the day.

They typically builds nest on open land with an unobstructed view of approaching predators. The nests are usually nothing more than shallow scraped out patches in gravel or soft soil and lined with materials like grass, twigs and other debris like broken seashells.

When not breeding, the Killdeer bird is mostly found around areas of standing water, beach or coastal wetland habitats.

Killdeer are omnivorous birds, and love to do their foraging in wide open fields. Particularly those with short vegetation or that have grazing cattle. They eat a variety of things such as insects, berries, worms, and invertebrates. They mostly scavenge for food on the ground, such as beetles, flies, earthworms, grass spiders and millipedes. Insects that you would expect to find in any fertile field.

Killdeer are not picky eaters and will often try new things if there is available food. When winter comes, they may supplement their diet with seeds and grains from farmers’ fields or bird feeders.

In addition to foraging on the ground, Killdeer will also hunt in shallow water, where they can use their long legs to wade through the water in search of food. They will also fly up and catch prey that is flying by, like dragonflies or other small insects.

Killdeer have quite a few interesting behaviours that make them an interesting species to observe. One of the most distinctive, is the characteristic call these birds have, that sounds like “kill deer”, hence their name. It is quite a vocal species, even at night with a variety of calls at it’s disposal. But it is the ‘kill deee’ or ‘kill deer’ call that stands out.

Killdeers are considered to be very skittish birds, and will often fly away at the slightest noise or disturbance. However, they are also very territorial, and will attack intruders who come too close to their nests.

One behaviour that they may display during breeding season when they are a little ‘braver’, is what is known as the ‘ungulate’ display. This is where they will aggressively charge at a predator with their head lowered, as you might expect from a male stag deer or elk. This can be fatal however.

They are also known however, for their unusual behavior of pretending to be injured in order to lure predators away from their nests. When a predator is spotted, the killdeer will act as if it has been injured, dragging one of its wings or feigning a broken leg. The ploy often works, as the predator will take the bait and leave the killdeer alone.

Killdeer are not fussy about their mates, and quick to partner up soon after arriving at the breeding grounds. For breeding they typically do this away from the coastal and wetland areas that they tend to live in for the rest of the year.

Breeding season changes depending on the location, with egg laying in the northern ranges occurring from the middle of April to July. Populations living in the southern parts of the range lay eggs earlier, starting around the middle of March until early June. In both cases the breeding season ends in August when the birds will move back to their favored habitats.

For some island populations, particularly of the (Charadrius vociferus ternominatus) subspecies, breeding occurs all year round and these birds are non migratory.

The killdeer is a ground-nesting bird. The female lays 3-5 eggs in a scrape on the ground. These scrape nests are usually in open ground with very shallow vegetation, although they will nest on rooftops too when available.

Killdeers are monogamous birds and both parents take turns incubating the eggs and caring for the young. The eggs are incubated for 23-26 days, and the males will defend their territory during this time, while also taking their share of incubating the eggs, particularly during the night.

There will usually be one attentive parent while the other deals with other tasks, like foraging. There will usually be at least one parent with the hatchlings until they reach about 15 days old. By 31 days the young birds will fledge and start to become independent. The parents will still offer some support for a few days after fledging but then the youngsters are capable of looking after themselves.

Killdeers are not considered to be threatened or endangered, but their populations have been declining in some areas. The main threats to killdeers are habitat loss and destruction, as well as predation by other animals.

There are a few things that people can do to help protect killdeers and their habitats. One is to avoid disturbing or disrupting the birds when they are nesting. Another is to plant native grasses and flowers in your garden, which will provide food and shelter for the birds.

Killdeer have a few natural predators from both land and air. They are often seen as an easy meal for several types of birds including hawks, owls, and falcons as well as herring gulls, and crows. Opportunistic hunters such as raccoons, skunks and also feral cats are also common predators of Killdeer.

While some are more likely to strike a vulnerable nest with eggs and chicks, raccoons and other animals such as weasels or wolverines are also capable of taking out any adults found in the nest.