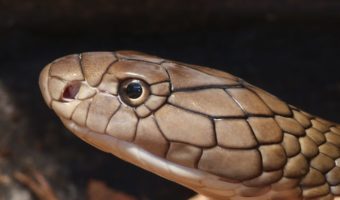 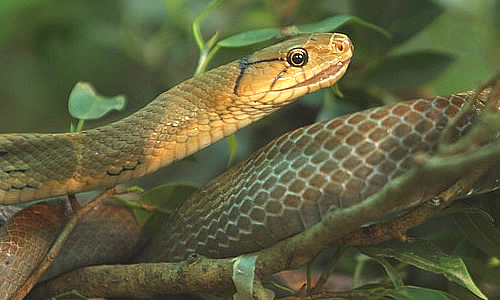 The King Cobra snake is the largest of the venomous land snakes, growing up to 18.5 feet (5.7 metres) in length and with a width of up to 1 foot (0.3 metres) at the neck. However, as they are generally slender, King Cobras usually do not exceed 44 pounds (20 kilograms) in weight. Male King Cobras are longer and weigh more than female King Cobras, this is very unusual since in most snake species, the male is smaller than the female.

The King Cobra can lift a third of its body off the ground. In fact, an 18 foot King Cobra, if stood upright, could actually look down onto the average human being. Like other snakes bearing the cobra name, the King Cobra can also flatten its neck, giving it the distinctive hood. When the King Cobra is threatened or on the attack, it will hiss, rear up and flatten its neck ribs into the hood. There are false eyespots on the hood, which can scare some predators.

Even though their scaly skin glistens, it is actually dry to the touch. Adults cobras are yellow, green, brown, or black. Their throat is light yellow or cream colored. Juveniles are black with yellow or white bars crossing the body.

The King Cobra snake lives in much of mainland South East Asia and throughout the dense highland forests. The King Cobra has a preference for living in areas where there are lakes and streams as it is an excellent swimmer. King Cobra populations have reclined in some areas of its range due to the destruction of forests, however, despite this the snake is not listed by the IUCN as in danger of becoming extinct. The King Cobra is said to be the only snake which makes nests for its eggs. It is widely worshipped in India as nagaraja (‘king of snakes’).

A Group of King Cobras is called a ‘Quiver’. Despite the King Cobras fearsome reputation, it is generally a shy and reclusive animal, avoiding confrontation with people as much as possible. There are many smaller venomous snakes within this species range that are responsible for a far greater number of fatal snake bites.

The King Cobra snakes diet is mainly composed of other snakes (ophiophagy – a specialized form of feeding or alimentary behaviour of animals which hunt and eat snakes). The King Cobra snake prefers non-venomous snakes, however, it will also eat other venomous snakes including kraits and Indian Cobras. Cannibalism is not rare. When food is scarce, King Cobras will also feed on other small vertebrates such as lizards. Like all snakes, they swallow the prey whole, head first. The top and bottom jaws are attached to each other with stretchy ligaments, which let the snake swallow animals wider that itself. Snakes cannot chew their prey. Food is digested by very strong acids in the snakes stomach. After a large meal the snake may live for many months without another meal due to a very slow metabolic rate. King Cobras are able to hunt at all times of day, although it is rarely seen at night, leading some to debate whether it is a diurnal species.

King Cobras, like other snakes, smell using their forked tongue which picks up scent particles and transfers them to a special sensory receptor (Jacobson’s Organ), located in the roof of its mouth. When the scent of a potential meal has been detected, the snake will continue to flick its tongue to gauge the preys direction. It will also rely on its excellent eyesight. The King Cobra snake is able to detect moving prey almost 300 feet (100 metres) away. The King Cobra snake uses sensitivity to vibrations and outstanding intelligence (compared to that of other cobra species) to track its prey.

Breeding usually takes place in late spring or early summer. After mating, the male will return back to its own home. The female will then lay between 10 and 25 eggs. The offspring are independent as soon as they are born and can capture prey the size of a rat.

Breeding takes place when the two snakes twist their bodies together and can last for days in this position. Females wait approximately 55 days before laying eggs. Female offspring are not bigger than male offspring. The King Cobra snakes average life span is about 20 years.

The King Cobras venom is a neurotoxin, capable of killing humans. The mortality rate can be as high as 75%, however, most bites involve nonfatal amounts.

Their venom is not the most potent among venomous snakes, however, the amount of neurotoxin they can deliver in a single bite – up to two-tenths of a fluid ounce (seven millilitres) – is enough to kill 20 people, or even an elephant. Fortunately, king cobras are shy and will avoid humans whenever possible. King Cobra snakes are fiercely aggressive when cornered or provoked.

King Cobra venom, which is composed mostly of proteins and polypeptides, is produced in specialized salivary glands just behind the snakes eyes. When biting its prey, venom is forced through the snakes half – inch – long (8 – 10 millimetre) fangs and into the wound. Although the venom is less toxic than that of many other venomous snakes, including the Indian Cobra, a King Cobra is capable of injecting more venom than any other snake except the gaboon viper. In fact, a King Cobra can deliver enough venom to kill a full-grown Asian Elephant in 3 hours.