You are here: Home / Animals / Kinkajou 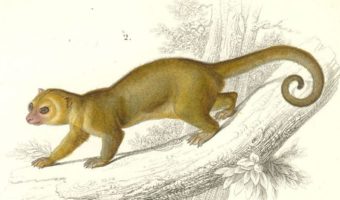 The Kinkajou (Potos flavus), also known as the ‘Honey Bear’, ‘Sugar Bear’, or ‘Cat Monkey’ is a small rainforest mammal related to the olingo, cacomistle and raccoon and is native to Latin and South America.

The Kinkajou is the only member of the genus ‘Potos’

Native to Mexico, Central American rainforests and South American rainforests, this arboreal mammal is not particularly rare, though it is rarely seen by people because of its strict nocturnal habits. Kinkajous may be mistaken for ferrets or monkeys, but they are not related. 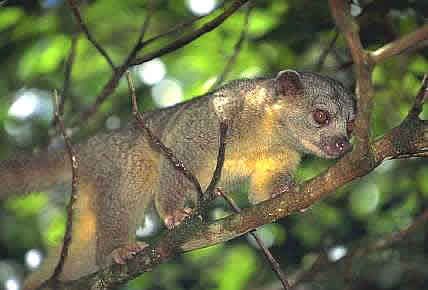 The kinkajou has gold woolly fur which overlaps grey. Kinkajous also have short-haired, fully prehensile tails (like some New World monkeys), which they use as a fifth hand in climbing. An average adult kinkajou weighs 2 – 3 kilograms (4 – 7 pounds). Kinkajous grow to an average body length of 17 – 22 inches, their tail is 16 – 22 inches in length in addition to the body.

Kinkajous do not use their prehensile tails for grasping food. The prehensile tail distinguishes kinkajous from the related olingos who are small procyonids native to the rainforests of Central and South America. Olingos are arboreal and nocturnal and live at elevations from sea level to 2,000 metres. Olingos lack prehensile tails.

Kinkajous sleep in hollow trees. They spend most of their lives in the branches of trees, using their prehensile tail to grasp branches.

Kinkajous are sometimes kept as pets. Their personality tends to be playful and curious, and they are generally tame. However, some owners report unpredictable, vicious attacks by their kinkajous even after several years of non-aggression.

Although Kinkajous are classified in the order Carnivora and equipped with sharp teeth, they actually primarily eat fruit. One source of help in getting fruit in small areas is their long tongue that is slender and has a length of 5 inches. The tongue is also used to obtain nectar from flowers, allowing the kinkajou to play the role of a pollinator. Nectar is sometimes also obtained by simply eating flowers.

Although captive animals will eat honey (earning them the name ‘Honey Bear’), it has never been observed in the diet of wild kinkajous, however, they have been know to collect honey from bee hives with their long, slender tongues.

Like raccoons (also members of the family Procyonidae), kinkajous have remarkable manipulative abilities, in this respect rivaling primates.

Kinkajous sleep together in family units and groom each other. While they are usually solitary when foraging, they occasionally do so in small groups and sometimes also associate with olingos.

Kinkajous do not like to be awake during the day and dislike noise or sudden movements. If they are agitated too much, they may emit a scream and attack, usually clawing their victim and biting deeply.

Kinkajou bites are particularly dangerous as their saliva contains a sticky, species-bacterium – ‘Kingella potus’, first identified by Dr. Paul Lawson of the University of Oklahoma.

A major method of communication between kinkajous is by scent. Kinkajous have scent glands near the mouth, on the throat and on the belly. Making sounds (grunting and growling) is another way these animals communicate.

During the night, it is possible to hear the Kinkajou vocalizing. Their shrill calls resemble a womans scream. For this reason, one folk name for the kinkajou is ‘la llorona’ which translates directly from the Spanish language into ‘the crying woman’.

Female Kinkajous give birth to one tiny baby (two babies are less common). At birth, the baby kinkajou is blind, but it can grasp objects with its strong tail.

Hunters of the kinkajou include the fox, jaguarundi, jaguar, ocelot, margay, tayra and people. However, they are not an endangered species and their status is ‘Least Concern’.