You are here: Home / Animals / Koala 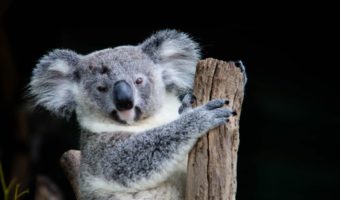 The Koala (Phascolarctos cinereus) is an Australian arboreal marsupial which is native to parts of Australia particularly Queensland, Victoria and New South Wales. The word koala comes from the Dharuk word ‘gula’. The word is said to mean ‘does not drink’ as the Koala receives over 90% of its moisture from the Eucalyptus leaves (also known as gum leaves) that are its main diet.

Koalas are sometimes called ‘Koala Bears’, however, they are not really bears although they have been thought to resemble teddy bears. The closest living relative of the Koala is a Wombat who is of similar appearance.

Their fur protects them from both high and low temperatures and acts like a raincoat to repel moisture when it rains.

The fur on a koalas bottom is densely packed to provide a ‘cushion’ for the hard branches it sits upon.

Mature males are recognisable by the brown ‘scent gland’ in the centre of their white chest.

Koalas have large ears with white hairs at the tips and small eyes. The Koalas nose is one of its most important features and it has a very highly developed sense of smell. This is necessary to differentiate between types of eucalyptus leaves and to detect whether the leaves are poisonous or not. Koalas limbs are long and they have large sharp claws to assist them with climbing trees. Koalas have 5 digits and are equipped with opposable thumbs which help them to grasp objects such as food and branches.

Koalas are one of the few mammal species that actually have fingerprints. Koala fingerprints are similar to human fingerprints and it is quite difficult to tell them apart, even under a microscope. A Koalas weight varies from 30 pounds (14 kilograms) for larger species to 11 pounds (5 kilograms) for smaller species. The average Koala grows to be around 2 feet tall.

Koalas have similar teeth to those of a Kangaroo or Wombat which are adapted to their herbivorous diets. Their sharp incisors clip off leaves at the front of their mouths and their grinding cheek teeth chew their food. A gap between the incisors and the molars, called a ‘diastema’, allows the tongue to move the mass of leaves around the mouth efficiently.

Koalas have an excellent sense of balance which means they are well suited to life in the trees. Their lean, muscular bodies help support their weight when climbing up a tree. Their climbing strength comes from their thigh muscles joining their shins much lower than in other animals.

The Koalas digestive system is especially adapted to detoxify the poisonous chemicals in the eucalyptus leaves. The toxins are thought to be produced by the gum trees as a protection against leaf-eating animals like insects. Trees which grow on less fertile soils seem to have more toxins than those growing on good soils. This could be one reason why koalas will eat only certain types of eucalypts and why they will sometimes even avoid them when they are growing on certain soils. The toxins are deactivated and the paste is digested by bacterial fermentation in a greatly enlarged caecum which is 2 metres (6 feet 6 inches) long, the longest of any mammals.

Koalas prefer eucalyptus forests, coastal regions and moist woodlands. They spend most of their time up in the trees sitting on branches either napping or eating the leaves.

Koalas only need to drink when they are ill or when there is a lack of moisture during droughts as 90% of their moisture comes from the plants they eat. (As mentioned above). Koalas also may swallow some soil to obtain minerals and nutrients.

Koalas are nocturnal animals and are arboreal which means they live in trees. Some Koalas are mainly solitary animals, except for the breeding season and tend not to congregate in large groups. Most live in societies and are in contact with other Koalas. It is because of this they need to have areas of suitable eucalyptus forests which are large enough to support a healthy koala population and to allow for expansion by maturing young koalas. When approaching a tree to climb, koalas spring from the ground and catch their front claws in the bark, then bound upwards. Claw marks are usually visible on the trunks of trees regularly used as home trees by koalas.

When descending a tree, koalas come down bottom first. They regularly descend to the ground to change trees and it is there that they are most vulnerable to predators such as dogs, foxes and dingoes. On the ground they walk awkwardly on all-fours and can also run. Koalas have sometimes been observed swimming, but this is rare.

Koalas use a range of sounds to communicate with one another over relatively large distances and the male koala has a very loud call during the breeding season which can be heard over a kilometre away. Mother Koalas and their babies make soft clicking, squeaking sounds and gentle humming or murmuring sounds to one another, as well as gentle grunts to signal displeasure or annoyance.

All koalas share one common call which is produced when they are afraid. It sounds like a human baby crying and made when the Koalas are under stress and threatened. It is often accompanied by shaking. Koalas also communicate by scent marking their trees.

Koalas have a very slow metabolism just like Sloths and Wombats which makes them rest for up to 18 hours a day. They are asleep for most of this time. The remainder of the time is used for feeding, moving around, grooming and social interaction. A disturbed Koala can become violent and with their sharp teeth and claws can cause injury to a human.

Female Koalas reach sexual maturity at 2 – 3 years of age. Males reach maturity later at 3 – 4 years. Mating occurs between the months of December and March, which is summertime in the Southern Hemisphere. Female Koalas produce one young joey each year and continue to breed for up to 12 years if they are healthy.

Koala’s are marsupials. A female Koalas gestation period is 35 days. Baby Koalas are very vulnerable at birth and are hairless, blind and have no ears. Baby Koalas are so tiny at birth and only measure around a quarter of an inch long. After birth, the joey will crawl into its mothers pouch located on its mothers belly and attach itself to one of her teats. It will stay in the pouch for around 6 months feeding on the milk from its mothers teat. After this time, the joey will begin to consume its mothers ‘pap’ which comes from the mothers cecum (beginning of the large intestine). Pap is a specialized form of droppings which is soft and runny. The ‘pap’ will pass on micro organisms from the mothers digestive system to prepare the joey’s gut for the digestion of its future diet of eucalyptus leaves.

The joey will remain with its mother for another 6 months, riding on her back and feeding on both milk and eucalyptus leaves until it is fully weaned at 12 months of age. Females usually leave their mothers, however, males will remain with their mother until they are 2 – 3 years old. The life span of a Koala is up to 18 years.

The IUCN lists the Koala as ‘Least Concern’. The Australian government does not consider the species to be threatened. However, in some parts of Australia such as New South Wales, Koalas are considered ‘Vulnerable’. Habitat loss, dog attacks and road accidents are all leading threats to the survival of the Koala. The Australian Koala Foundation is the principal organisation dedicated to the conservation of the koala and its habitat, mapping 40,000 kilometres squared (15,000 square miles) of land for koala habitat and claiming strong evidence that wild koala populations are in serious decline throughout the species natural range. The Australian Koala Foundation estimates there are around 100,000 koalas left in the wild.