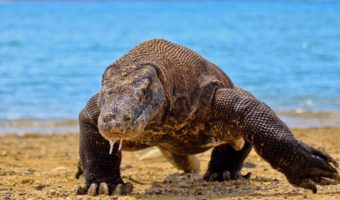 The Komodo dragon (Varanus komodoensis) is a lizard species that is found on the islands (particularly the Komodo Island) in central Indonesia. The komodo dragon is a member of the monitor lizard family and is the largest living species of lizard. Because of their size and because there are no other carnivorous animals, these apex predators dominate the ecosystem in which they live. 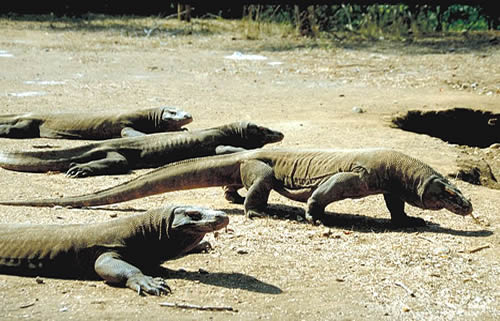 Komodo Dragons grow to an average length of 2 – 3 metres (6.5 – 10 feet) and weigh around 70 kilograms (154 pounds). Captive komodo dragons may often weigh more, as much as 166 kilograms (365 pounds). Komodo dragons are the heaviest lizards on Earth. They have long, flat heads with rounded snouts, scaly skin, bowed legs and huge, muscular tails. They have about 60 frequently replaced serrated teeth that can measure up to 2.5 centimetres (1 inch) in length. Their saliva is frequently tinged with blood, because their teeth are almost completely covered by gingival tissue that is naturally lacerated during feeding. They also has a long, yellow, deeply-forked tongues. Their tongue is used to detect taste and smell as in many other reptiles and they can detect carrion from 4 – 9.5 kilometres (2.5 – 6 miles) away.

Komodo Dragons have visible ears although they do not have acute sense of hearing. They are able to see as far as 300 metres (985 feet), however, they have poor night vision. The Komodo Dragon is also able to see in color.

The komodo dragons nostrils are not very good for smelling and it only has a few taste buds at the back of its throat. Their scales, some of which are reinforced with bone, have sensory plaques connected to nerves that facilitate their sense of touch. The scales around the ears, lips, chin and soles of the feet may have three or more sensory plaques.

Komodo Dragons are carnivores and mainly feed up on carrion (dead animal carcasses). They also hunt and ambush prey such as invertebrates, mammals and birds. To catch prey that is out of reach, komodo dragons are able to stand on their hind legs and use their tails as support. They have also been known to use their tails to knock down large deer and pigs.

Komodo dragons eat by tearing large chunks of flesh and swallowing them whole while holding the carcass down with their forelegs. Because of their slow metabolism, large dragons can survive on as little as 12 meals a year. Because the Komodo dragon does not have a diaphragm, it cannot suck water when drinking, nor can it lap water with its tongue. Instead, it drinks by taking a mouthful of water, lifting its head, and letting the water run down its throat. A komodo dragon can eat a whopping 80 percent of its body weight in a single feeding.

Komodo Dragons are mostly active during the day but have shown some nocturnal behaviour. They are solitary animals that only come together to breed and eat. They are quite fast creatures and can move rapidly in brief sprints up to 20 kilometres per hour (12.4 miles per hour). Young komodo dragons can climb trees easily with the use of their strong claws.

Because of their large size, Komodo Dragons are able to conserve body heat by sleeping in their burrows reducing their need to bask in the mornings. They typically hunt in the afternoons and stay in shaded areas during the hottest parts of the day.

Although not strictly venomous, the bite of a Komodo Dragon is not just dangerous for the physical damage the Komodo is capable of causing, it is also heavily dosed with dangerous bacteria. If a victim is lucky enough to escape being eaten, because of the bacteria, it is likely to die eventually. A komodo dragon will follow its escapee until this happens (usually within a week), and then consume it.

The Komodo Dragon breeding season occurs between May and August. Around 20 eggs are laid in September which are deposited in abandoned megapode nests (Megapode – stocky, medium-large chicken-like birds with small heads and large feet). Eggs are incubated for 7 – 8 months, hatching in April the following year when insects are abundant. The young dwell in trees for safety as they are very vulnerable to predators and cannibalistic adult dragons.

Komodo Dragons mature in about 3 – 5 years. Komodo Dragons are capable of parthenogenesis (par-the-no-gen-e-sis), a form of reproduction in which an unfertilised egg develops into a new individual, occurring commonly among insects and certain other arthropods. Young Komodos will eat insects, eggs, geckos and small mammals. Komodo dragons may be monogamous and form pair bonds, a rare behaviour for lizards. The life span of the komodo dragon is over 30 years.

The Komodo Dragon is classed as ‘Vulnerable’ by the IUCN. Komodo Dragons are protected under Indonesian law, and a national park, Komodo National Park, was founded to aid protection efforts. In the wild their range has contracted due to human activities. The largest risk to the survival of the Komodo Dragon is encroachment by humans, destruction of environment and poaching of prey such as the Sunda deer. There are approximately 4,000 – 5,000 living Komodo dragons in the wild. Although attacks are very rare, Komodo dragons have been known to kill humans.

Komodo dragons were discovered by Western scientists in 1910. Their large size and fearsome reputation makes them popular zoo exhibits. Small (young) Komodo Dragons are accomplished tree climbers.Komodo Dragons are cannibals, eating their young and occasionally their eggs.The Dragons teeth are large, curved and serrated and arranged so that the maximum amount of flesh can be bitten off and swallowed whole.The saliva of a Komodo Dragon contains over 50 types of bacteria, 7 of them highly septic.Under severe environmental conditions, Komodo Dragons have been know to swim between islands.Young Komodo Dragons may roll themselves in entrails and faeces to prevent being eaten by mature Komodo Dragons.