You are here: Home / Animals / Krill 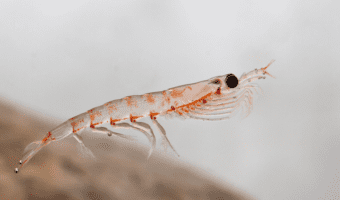 Krill are small crustaceans of the order Euphausiacea, and are found in all the world’s oceans. They belong to the class Malacostraca, which contains some 40,000 species of crustaceans, and includes the superorder Eucarida comprising the three orders, Euphausiacea (krill), Decapoda (shrimp, prawns, lobsters, crabs), and the planktonic Amphionidacea.

There are two families within the order Euphausiacea — Euphausiidae, which contains 10 different genera with a total of 85 species, and the Bentheuphausiidae, which has only one species, Bentheuphausia amblyops. This is a bathypelagic krill living in deep waters below 1,000 m (3,300 ft). It is considered the most primitive extant krill species.

It is one of the most abundant species in the entire food chain, with many animals feeding on it. A disruption to the world’s marine life resulting in loss of krill could have a ginormous effect on entire ecosystems. 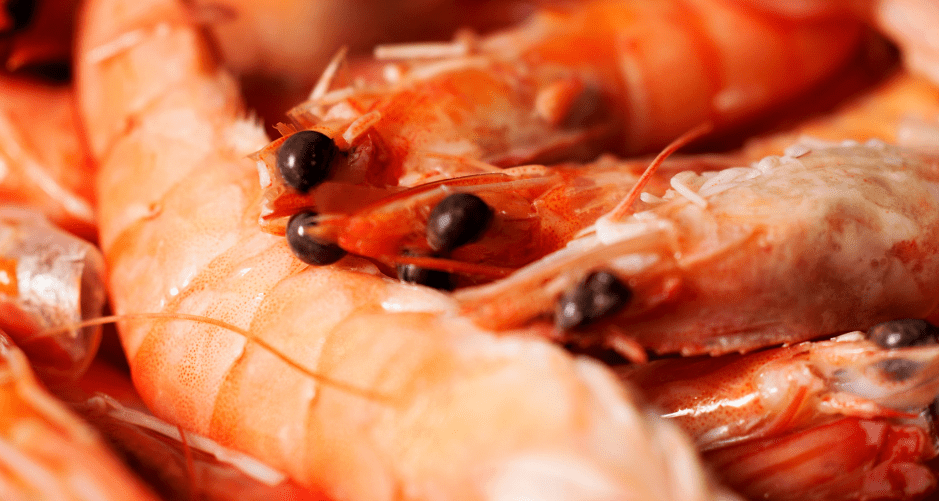 The defining feature of the Malacostraca and all crustaceans, in general, is the presence of a hard shell composed of a carbohydrate material called chitin. Krill have the standard decapod anatomy with their bodies made up of three parts: the cephalothorax, which is composed of the head and the thorax (which are fused), the pleon, which bears the ten swimming legs, and the tail fan. This outer shell of krill is transparent in most species.

Because they are decapods, they have five pairs of swimming legs called “swimmerets”, very similar to those of a lobster or freshwater crayfish. They also have several pairs of thoracic legs called pereiopods or thoracopods, named because they are attached to the thorax. Their number varies among genera and species. These thoracic legs include feeding legs and grooming legs.

Krill have compound eyes, and some species adapt to different lighting conditions through the use of screening pigments. They also have two antennae. They can be easily distinguished from other crustaceans because they have externally visible gills.

They are often mistaken for shrimp because both have long, segmented bodies. However, the shrimp has only two segments, a colorful non-transparent body, and slightly large size.

The lifespan of krill depends on which ocean they live in. Those that occupy the warm tropical or subtropical waters live between six and eight months, whereas polar species live as long as six years if they can successfully evade predators.

Krill are herbivorous or omnivorous in nature. They feed on small algae or microscopic animals such as phytoplankton and zooplankton that happen to pass by. A few species are exclusively carnivorous and supplement their diet with fish larvae.

These small crustaceans are filter feeders and their frontmost appendages, the thoracopods, form very fine combs with which they can filter out their food from the water. They passively suck up the vast quantities of small food in the water.

Krill are very important to the food chain. They convert the primary production of their prey into a form suitable for consumption by larger animals that cannot feed directly on the minuscule algae. 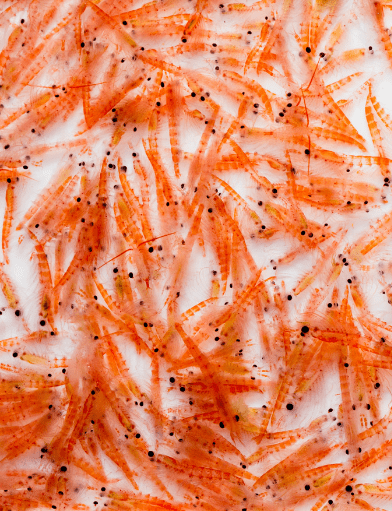 Krill are swarming animals. The sizes and densities of krill swarms vary by species and region, but some are so big that they can be seen on satellite images. For example, the Antarctic krill, Euphausia superba, swarms reach 10,000 to 60,000 individuals per cubic meter. This swarming behavior is to confuse predators, that would prefer to pick out individuals.

They are also migratory animals, that follow diurnal vertical migration. They spend the day at greater depths and rise during the night toward the surface. The deeper they go, the more they reduce their activity, which reduces encounters with predators and conserves their energy. The vertical migration may happen to to three times a day.

Swimming activity in krill varies with stomach fullness. Animals that had been feeding at the surface swim less actively and therefore sink below the mixed layer. As they sink they produce feces which implies a role in the Antarctic carbon cycle. Those with empty stomachs swim more actively and thus head towards the surface.

Like all crustaceans, krill must molt in order to grow. Approximately every 13 to 20 days, they shed their chitinous exoskeleton and leave it behind as exuvia. Molt frequency can depend on the temperature of the water.

The mating season for krill varies by species and climate. During the mating period, the male deposits a sperm sack at the female’s genital opening. She can carry several thousand eggs in her ovary! They can have multiple broods in one season.

There are two types of spawning mechanism for krill, depending on the species. The 57 species of the genera Bentheuphausia, Euphausia, Meganyctiphanes, Thysanoessa, and Thysanopoda are “broadcast spawners”. This means the female releases the fertilised eggs into the water, where they usually sink, disperse, and are on their own. The remaining 29 species of the other genera are “sac spawners”, where the female carries the eggs with her, attached to the rearmost pairs of thoracopods until they hatch.

After hatching from the eggs, the young will pass through several larval stages. In the early stages, the undeveloped krill lack the appropriate feeding apparatuses and survive almost exclusively on the egg yolk. In later stages, they develop a mouth and digestive system for consuming plankton. Each stage requires them to replace their entire exoskeleton through a series of molts. After the final stage of molt, they reach sexual maturity.

These small crustaceans occur in all oceans across the world, all the way from the Arctic to Antarctica, including both coastal and deepwater regions. Different species are found in different oceans. For example Pacific krill occur in the Pacific, while Northern krill occur across the Atlantic from the Mediterranean Sea northward. The Antarctic krill is found in the Antarctic waters, and commonly lives at depths reaching 100 m (330 ft). Bathypelagic krill live in deep waters below 1,000 m (3,300 ft). 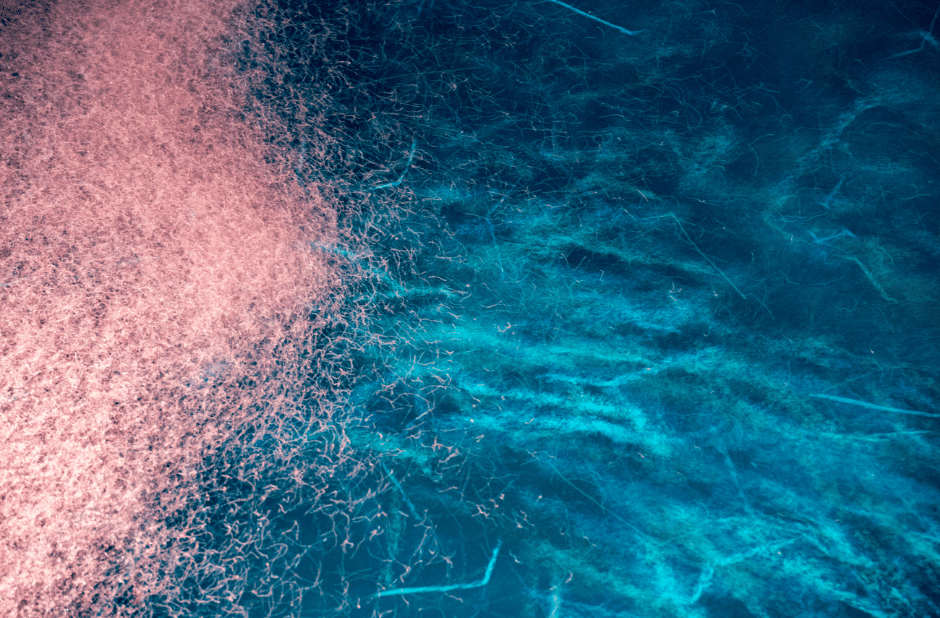 These creatures are not considered to be under threat from population loss. The total number of the worldwide krill population is truly staggering. It is estimated that the entire biomass of the Antarctic krill alone (meaning the total mass of every member of the species put together) is between 125 million and six billion tons, among the largest in the animal kingdom. This would mean there are trillions of individuals!

Despite this, it is thought that the population of this species may have fallen some 80% since the 1970s due to climate change, disease, and krill fishing. They are extremely important to the ocean’s ecosystem and are a source of food for many animals.

These small crustaceans are eaten by humans, and are particularly harvested in the Southern Ocean and around Japan. They are a rich source of protein and omega-3 fatty acids. They are eaten in Southeast Asia, where they are fermented or ground finely to make shrimp paste. The liquid from fermentation is also used as fish sauce. They are also used for dietary supplements, dog food, livestock.

Krill are a very important element in the aquatic food chain. As a food source, they connect the microscopic marine organisms at the bottom of the chain to the much larger predators at the top. Many animals feed on krill, ranging from smaller animals like fish or penguins to larger ones like seals, sea-birds (especially penguins) and baleen whales, including the blue whale.

When approached by a predator, they can make a hasty escape by swimming rapidly backwards at a pace of around 10 body lengths per second. This is trick known as lobstering.

They can be affected by disease, loss of prey and climate change. They are caught frequently in some fishery locations, too. Because of the large role they play in the ocean, disturbances to their populations can have a wider effect on the marine ecosystem, because this species makes up so many animals diet. This means loss of tiny krill could harm even some of the largest animals in our oceans.