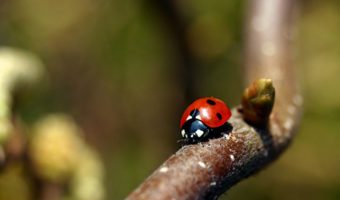 ‘Ladybird, ladybird, fly away home…….‘ – I bet everyone knows this rhyme about ladybirds – contrary to the words ‘fly away’, these tiny insects are more likely to be wanted in gardens and by farmers on the farms as they are a useful little bug, as they keep gardens and agricultural crops free from greenfly and other garden pests. They are generally considered useful insects as many species feed on aphids or scale insects, which are pests in gardens, agricultural fields, orchards and similar places.

Ladybirds (British English, Australian English, South African English), ladybugs (North American English) or lady beetles (preferred by some scientists) belong to the family Coccinellidae. The family name comes from its type genus, Coccinella. Coccinellids are found worldwide, with over 5,000 species described, more than 450 native to North America alone. Ladybirds are small insects, ranging from 1 millimetre to 10 millimetres (0.04 to 0.4 inches) and are commonly yellow, orange or scarlet with small black spots on their wing covers, with black legs, head and antennae.

Two-spot ladybirds have a red elytra (wing cases), each with a single black spot. The thorax is black with two large white markings at the side and the head is black. The coloration and patterning of these beetles can be quite variable.

Seven-spot ladybirds have three and a half spots on each of their two elytra (wing cases). The thorax is black with two white marks at the side, and the head is small and black. Larvae have lumpy grey-blue skin with yellow spots at the sides of their abdomens.

The largest native species living on the British Isles is the ‘Eyed Ladybird’.

The black spots on its wings have a subtle yellow surrounding which gives the appearance of an eye, hence the name ‘Eyed Ladybird’.

Most ladybirds eat aphids (greenfly), mealy bugs, coccids (scale insects) and whitefly, and of course other garden pests that damage plants and crops. Ladybird larvae can eat up to 25 aphids a day and an adult ladybird can eat over 50 aphids a day.

Some species of ladybird are herbivorous and feed only on mildews and microscopic plant fungi which is helpful because it can reduce the onset of certain fungal diseases in plants.

Such ladybirds are the yellow and black, 22 spotted ladybird pictured right:

The reason that ladybirds are so colorful is that they use their coloration to warn predators like insectivorous birds that they will not taste so good if they are eaten. When ladybirds are disturbed or handled, they deposit a yellow or amber-colored fluid which comes from their leg joints and other parts of their bodies. This fluid has a bitter taste. It also leaves a yellow stain on your skin which can smell horrid. So really, although they are relatively harmless, it is best not to handle them.

Adult ladybirds hibernate all winter. They snuggle up in dense vegetation, under logs and sometimes become residents of your home, sleeping in door frames, folds in curtains, in sheds and outhouses. If you do find one nesting in your home, spare a thought for the good work they do around your garden and coax it gently into an aired jar and put it in your shed or some other sheltered place to finish its sleep through the winter time.

Some ladybirds become gregarious during the winter and snuggle together in several hundreds.

It is unsure why they do this, probably to keep each other warm, however, they provide a colorful display if you find them.