You are here: Home / Animals / Lemmings 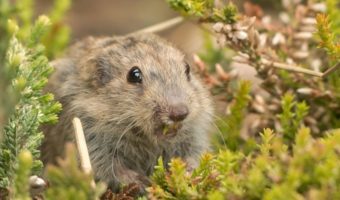 Lemmings are small rodents who are members of the Cricetidae family. They are subniveal animals (living in a zone that is in or under the snow layer) and together with the voles and muskrats, they make up the subfamily Arvicolinae. Lemmings are distributed throughout the tundra, alpine and mountain heaths of Scandinavia and Russia. The Norway Lemming (Lemmus lemmus), of Scandinavia is best known for its mass migration behaviour. 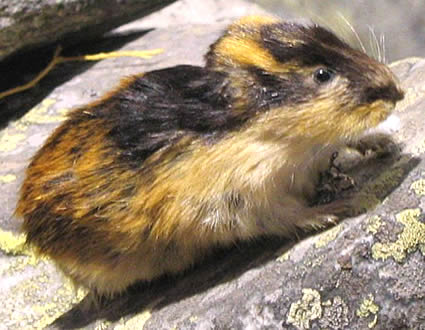 Lemmings measure around 13 – 18 centimetres (5 – 7 inches) in length and weigh around 23 – 34 grams (0.05 – 0.07 pounds). Lemmings are quite rounded in shape with brown and black long, soft fur. Lemmings have a very short tail, a stubby, hairy snout, short legs and small ears. They have a flattened claw on their first digit of their front feet which helps them to dig in the snow.

In a typical year, these rodents live in tunnel systems beneath the snow in winter which protects them from predators. Their underground burrows have rest areas, bathrooms and nesting rooms. Lemmings make nests out of grasses, feathers and musk ox wool. In the spring, they move to higher ground where they live on mountain heaths or in forests, continuously breeding before returning in Autumn to the Alpine zone.

Lemmings are herbivores with a main diet of moss and grass. They also forage through the snow surface to find berries, leaves, shoots, roots, bulbs and lichen. Like other rodents, their incisors are continuously growing which means they are able to munch upon much tougher food.

Lemmings migrate sporadically every few years when their is a population explosion. During mild winters, early springs and late autumns when food is abundant, reproduction is fast and survival of litters is high resulting in a summer soaring of Lemming numbers.

Lemmings are often wrongly said to commit mass suicide by jumping off cliffs. What does happen is, when populations increase, pressure can trigger mass migration, usually away from the heaths towards the forests. Obstacles in their paths, such as boulders, rivers, cliffs or ravines may force the Lemmings into a ‘bottleneck’ situation and with space being difficult to find causes the Lemmings to panic and take reckless flight. The young are more vulnerable and are pushed away from the best habitats down mountains and into valleys. Lemmings are good swimmers when they have to be, however, they do not know their limits. During dispersal, young lemmings often try to cross large bodies of water, drowning in the process. It is this bizarre behaviour which gave rise to the misconception that these rodents kill themselves.

Lemmings spend most of their time during the Scandinavian summers in their under ground tunnel systems, however, when the ground begins to freeze in Autumn, they cannot dig through the ice to forage for food and are forced to forage on the surface. Because of these complex tunnel systems, Lemmings do not have to hibernate, even during the harshest Scandinavian winters. The tunnels keep them out of sight from hungry predators such as Great Grey Owls which are heavily reliant on Lemmings as a source of food.

Lemmings, like other rodents, prefer to live in groups, however, some can be solitary and only come together to breed and migration purposes.

Lemmings mature at 5 – 6 weeks of age. They are prolific breeders and may produce 8 litters of up to 6 young each throughout the summer. The gestation period of the female Lemming is 20 days.

The life span of a lemming is less than 2 years.

Lemmings are common animals and are not endangered.