You are here: Home / Animals / Lemur 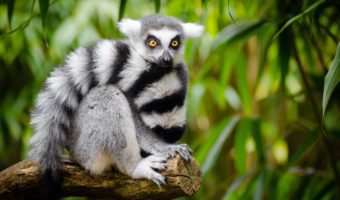 The Lemur or Ring-tailed Lemur (Lemur Catta) is a large prosimian (representing forms that were ancestral to monkeys, apes and humans), belonging to the family Lemuridae’.

Like all other lemurs, it is found only on the island of Madagascar and the Comoros Islands off of the East Coast of Africa.

Although threatened by habitat destruction and therefore listed as ‘vulnerable’ by the IUCN Red List, the Ring-tailed Lemur is the most populous lemur in zoos worldwide as they reproduce readily in captivity. 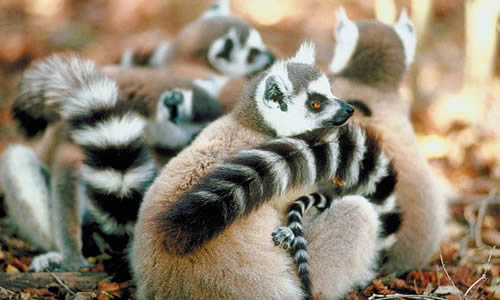 Rainforest Lemurs are mostly grey with white underparts. Lemurs have a slender frame, a narrow face that is white with black patches around the eyes and a black fox-like muzzle. The lemur can easily be recognised by its long, bushy tail that is ringed with twenty six black and white rings. Lemurs tails always begin with a white stripe and ends with a black one. Their tails are longer than their bodies at up to 56 centimetres (22 inches) in length.

The Lemur has hind limbs longer than their forelimbs and the palms and soles are padded with soft, leathery skin. Their fingers are slender and semi-dexterous (semi-skillful) with flat, human-like nails. Lemurs have one claw, known as a ‘toilet claw’ (a comb-like claw), on the second toe of each hind limb specialized for grooming purposes. These primates also groom orally by licking and tooth-scraping with narrow, horizontal lower incisors and canines, called a ‘tooth comb’.

Lemurs eyes are a bright yellow or orange color, which stay the same color from the time they are born. Adults may reach a body length of 46 centimetres (18 inches) and a weight of 5.5 kilograms (12 pounds).

Lemurs use their sense of smell to communicate with each other. Lemurs have scent glands on their behinds and on their feet that leave odours on surfaces they encounter. When other lemurs pass by, they smell those odours and can tell that another lemur has been there. Lemurs have big, bushy tails that they wave in the air as another form of communication. These big tails also help lemurs balance when they leap from tree to tree.

The Lemur primarily eats fruits and leaves, particularly those of the ‘tamarind tree’ (Tamarindus indica). When available, tamarind can make up as much as 50% of the Lemurs diet yearly. The Lemur is also known to eat flowers, herbs, bark and sap. Additionally, it has been observed eating decayed wood, earth, insects and small vertebrates.

Lemurs have several different habitats on Madagascar ranging from rainforests to dry areas of the island. They inhabit deciduous forests with grass floors or forests along riverbanks (gallery forests). Some also inhabit wet, closed brush where few trees grow. The Lemur is thought to require primary forest (forests which have remained undisturbed by human activity) in order to survive. Such forests are now being cleared at an alarming rate.

The Lemur is diurnal (an animal that is active during the daytime and rests during the night) and inhabits both the ground (terrestrial) and the trees (arboreal) and forms troops of up to 25 individuals. Social hierarchies are determined by sex.

Females have a distinct hierarchy and socially dominate males in all circumstances, including feeding priority. Males tend to be confined to a lower or outer limit of group activity and will alternate between troops approximately every 3 years. Lemur troops claim sizable territories which may overlap with those of other troops. Up to 5.6 kilometres (3.5 miles) of this territory may be covered in a single days foraging.

Lemurs are very vocal animals. Around fifteen distinct vocalizations are used to maintain group togetherness during foraging and alert group members to the presence of a predator or threat. Male and female lemurs scent mark with their genital regions, they also possess scent glands on their wrists and on the surface of their shoulders.

These glands secrete a greasy substance which is used to mark territories and maintain group dominance hierarchies. Males also possess a thorny spur on each wrist that are scraped against tree trunks to create grooves lubricated with their scent.

In displays of aggression, males will engage in a social display behaviour called ‘stink fighting’ which involves covering their tails with scent from their glands and then waving the scented tail at male rivals. Males will also occasionally wave their scented tails at females as a form of courtship. This usually results in the female cuffing or biting the male. Despite being primarily quadrupedal (four-footed), the Lemur can rear up and balance on its hind legs, usually for aggressive displays.

In the mornings, Lemurs usually bask to warm themselves. They face the sun, sitting in what is frequently described as a ‘sun-worshipping’ posture or ‘Lotus position’. However, they sit with their legs extended outward, not cross-legged and will often support themselves on nearby branches. Basking is often a group activity.

The Lemur breeding season runs from April to June, with the female in oestrus (the period of heat) for approximately 24 – 48 hours. Gestation (pregnancy) lasts for about 146 days (2 – 5 months), resulting in a birth of either one or two offspring. The young lemurs begin to eat solid food after two months and are fully weaned after five months.

When lemurs are born, they are carried in their mothers mouths until they are old enough to hang on to her fur by themselves. Males reach sexual maturity at two and a half years of age and females at nineteen and a half months. Most lemurs live for about eighteen years.

When threatened, the Lemur has been known to strike out with its short nails in a behaviour termed ‘jump fighting’. This action is extremely rare outside of the breeding season when tensions are high and competition for access to mates is intense. Only one attack on a human by a Lemur has ever been documented in the United States.

Lemurs are endangered species or threatened species. Many species went extinct in the last centuries, mainly due to habitat destruction (deforestation) and hunting.

Lemurs play an important role in the ecology of Madagascar and the Comores Islands, because they disperse seeds from the fruit they eat. These seeds can then grow into new plants, which is important because the forests of Madagascar are being destroyed at a very high rate.

People in Madagascar cut down the forests there to use the wood, and to grow agricultural crops in its place. In fact, eighty percent of the lemurs original habitat in Madagascar has been destroyed. Although the lemurs themselves help to disperse seeds for new plants, they cannot keep up with the people that cut the forests down.

Although conservation efforts are under way, options are limited because of the lemurs limited range and because of Madagascar’s economic situation. There are 85 living lemur species accounted for in current publications, with more documentation currently awaiting publication.

One of the foremost lemur research facilities is the ‘Duke University Lemur Centre’.