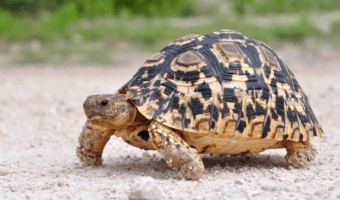 The leopard tortoise (Stigmochelys pardalis) is a large tortoise found in the savannas of eastern and southern Africa, from Sudan to the southern Cape. This tortoise is named after its interesting and attractive shell markings, which often resemble the pattern of a leopard.

The leopard tortoise is the only member of the genus Stigmochelys, although in the past, it was commonly placed in Geochelone. It belongs to the family Testudinidae and the order Testudines. Stigmochelys is a combination of Greek words: stigma meaning “mark” or “point” and chelone meaning “tortoise”. The specific name pardalis is from the Latin word pardus meaning “leopard”.

These animals have a herbivorous diet eat a variety of mixed grasses, as well as succulents and thistles, and prefers semiarid, thorny to grassland habitats.

Leopard tortoises are the most widespread tortoise in sub-Saharan Africa and, while they are not considered threatened, but they are under increasing pressure from habitat loss. They have also historically been exploited heavily for the pet trade. 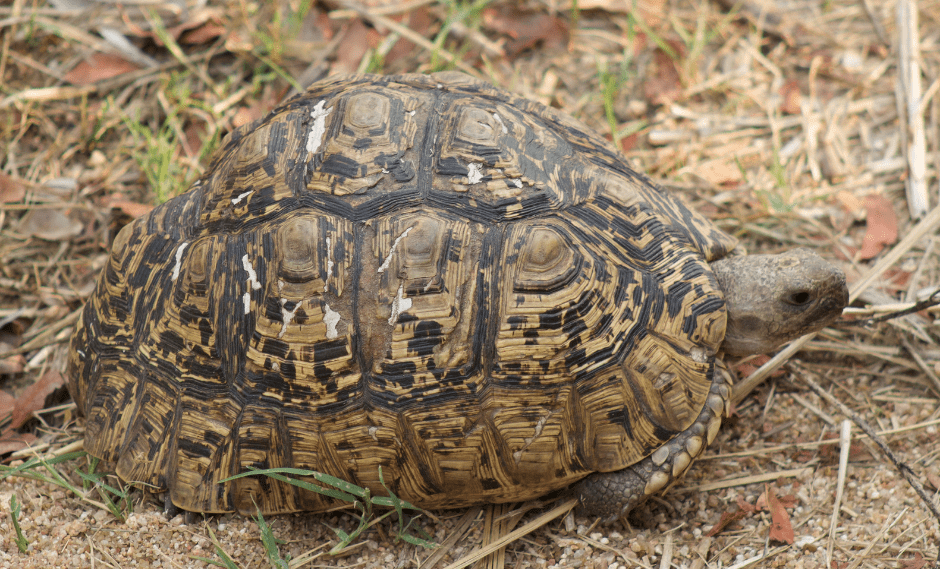 The leopard tortoise is the fourth-largest species of tortoise in the world. They usually reach 40 cm (16 in) in length and weigh between 15 and 54 kg. Females are often larger than males. Adults tend to be larger in the northern and southern ends of their range.

The leopard tortoise’s carapace is high and domed with steep, almost vertical sides. The base color of the carapace may be tan, yellow, or sometimes shades of dusty brown, and is decorated with leopard-like spots. The intensity of shell patterning varies. The head, feet, and tail vary in color but are usually tan to brown.

The leopard tortoise has the ability to live for up to 100 years! These animals are becoming more and more popular as pets, but people are reminded of their long lifespan before taking them into their home.

Leopard tortoises are herbivores and their diet consists of a range of different plants, including forbs, thistles, grasses, and succulents. Any seeds they eat are passed undigested through the gut, which means the leopard tortoise plays a significant role in seed dispersal. These animals may also gnaw on bones or even hyena feces to obtain calcium, necessary for bone development and their eggshells. 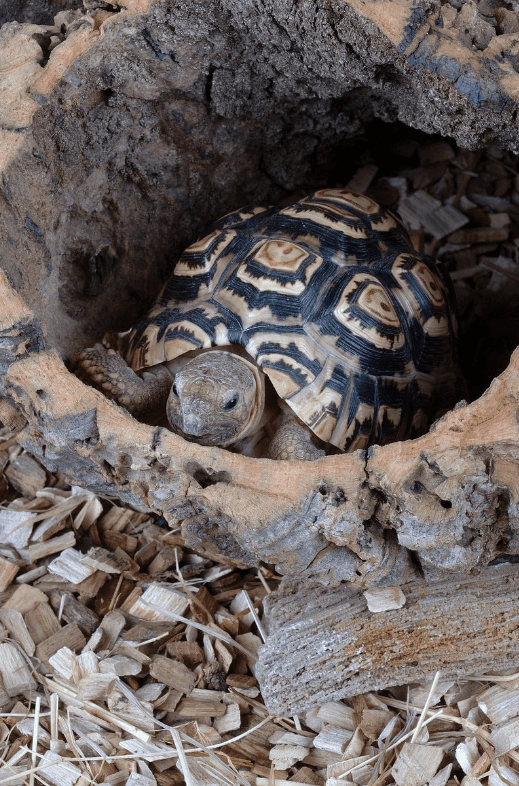 The leopard tortoise is active during the day, early in the morning and just before the sun goes down, when the temperature is most moderate. They seek shelter during the hottest part of the day and go to sleep early to avoid the cold.

When they are awake, they spend most of their time eating. While they do not have ears, they can sense vibrations that help them navigate their environment and also have a very strong sense of smell to help them locate food.

When it comes to finding a den or a place to shelter, they do not dig or create these themselves. They often take over in abandoned dense of other animals. The leopard tortoise does not dig other than to make nests in which to lay eggs.

Leopard tortoises are known for their hissing noises. When feeling threatened, tortoises quickly pull the head and feet into the shell, resulting in air being forced from the lungs and thus the distinctive hissing noise is produced. They are relatively solitary animals, and there is no evidence to suggest that these tortoises communicate with each other very much

Leopard tortoises breed from May to October. These animals are monogamous and both males and females become increasingly aggressive when searching for a mate. Males vocalize species-specific calls in an attempt to attract females. Males also vocalize during competition for mates. Male vocalizations include a variety of grunts and groans. Both sexes will butt and ram rivals.

During the mating season, male tortoises follow females for days or even weeks at a time before initiating courtship. In order to initiate contact, males bite the female on the head or feet.

After mating, females dig a hole in the ground, ranging from 100 to 300 mm deep, in which to lay her eggs. She will lay between 5 and 7 clutches in a season, with each clutch separated from the previous by about 3 to 4 weeks. Clutches range from 5 to 30 eggs, which are white and spherical. The gestation period ranges from 9 to 12 months and varies according to location, temperature, and precipitation.

Leopard tortoises don’t exactly raise their young. Males leave directly after copulation and, once the female has laid her eggs and covered them, she leaves too.

Once the baby leopard tortoises have hatched, they are immediately independent. They immediately start to feed on a variety of plants, but seem to prefer succulents, possibly because of the higher water content. Leopard tortoise young are usually marked with black blotches, spots, or even dashes and stripes on a yellow background.

Leopard tortoises are endemic to Africa and they are found across eastern and southern Africa, extending from South Sudan and Somalia, across East Africa, to South Africa and Namibia.

Over this range, the leopard tortoise occupies the most varied habitats of any African tortoise, including grasslands, thorn-scrub, mesic bushland, and savannas. They can be found at altitudes ranging from sea level to 2,900 m (9,500 ft).

The leopard tortoise is well adapted to the semi-arid conditions of the savannah, and do not tolerate damp or cold well. As with all arid regions, the African savannah experiences extreme temperature fluctuations over a 24-hour period. It gets very hot during the day when the sun is burning brightest, but cools off considerably when the sun goes down. During this time, they will seek shelter under various low lying plants, or may seek refuge in abandoned fox, jackal, or aardvark holes. 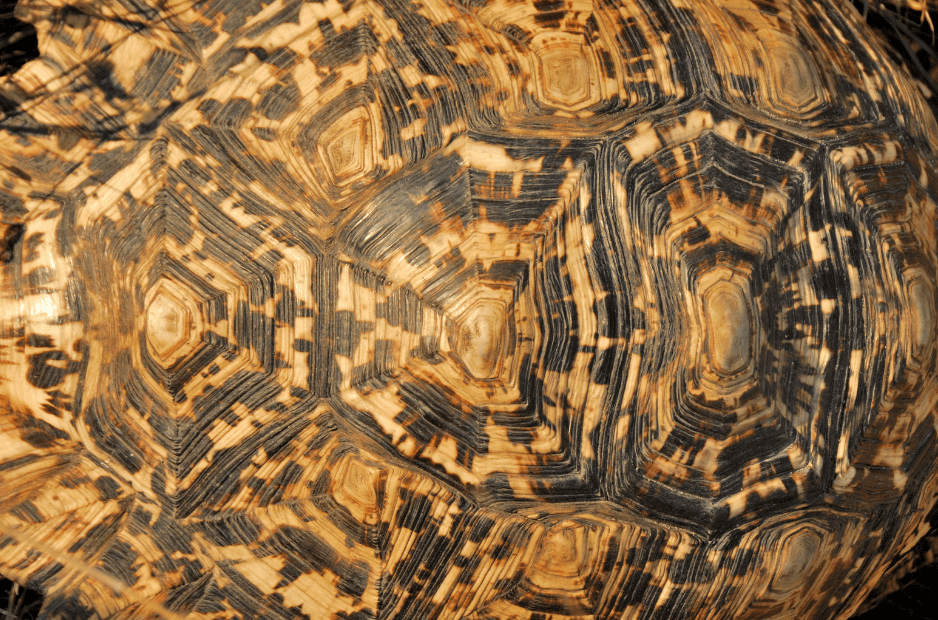 The leopard tortoise is a widespread tortoise, the most widespread tortoise in sub-Saharan Africa, and is well populated over its range. It is currently listed as Least Concern on the IUCN Red List. Humans are the biggest threat to these animals, with agricultural burning, consumption, and commercial exploitation in the pet trade being the biggest dangers. However, these activities have yet to cause major decline in the tortoise species’ population.

Leopard tortoises are being bred increasingly in captivity for the pet trade, but these animals can be difficult to keep as a pet. They are very large and don’t like to handled. Also, not to mention, they can live for up to 100 years — and may well outlive their owner!

In the wild, leopard tortoises are not really preyed on by other animals. Their thick, heavy shells means they are difficult to capture, and their coloring means they are camouflaged well. Hatchlings, however, are easy prey to animals such as foxes, coyotes and mongooses. Nearly 80% of leopard tortoise hatchlings are eaten by prey.

Adult leopard tortoises are preyed on by humans. They are taken for creating medicine, tools, and are often used as a source of food.

Check out more animals that begin with the letter L