You are here: Home / Animals / The Leopard 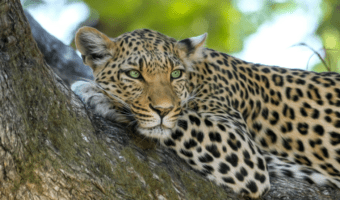 The leopard (Panthera pardus) is one of the five extant species in the genus Panthera, a member of the cat family, Felidae. Other members of the genus are the lion, the jaguar, the snow leopard and the tiger.

Leopards are characterized by their striking fur of dark spots grouped in rosettes, that allow them to camouflage against their habitat. These big cats are also known for their strength, opportunistic hunting behavior and the ability to run very fast, at speeds of up to 58 km/h (36 mph).

The leopard is found across sub-Saharan Africa and southern Asia. There are nine different sub-species of Leopard which differ in their appearance and geographic location, with the African Leopard being the most common and widespread. The others are the rare Amur Leopard, Sri Lankan Leopard, Javan Leopard, Indochinese Leopard, North-Chinese Leopard, Persian Leopard, Arabian Leopard and Indian Leopard.

Although African leopards are stable across most of their range, leopards are considered locally extinct in many countries they used to inhabit. Records suggest that the leopard occurs in only 25% of its historical global range. Five of the nine subspecies of these wild cats are listed as endangered or critically endangered, and the leopard species as a whole is listed as Vulnerable on the IUCN Red List. This is largely down to habitat loss. 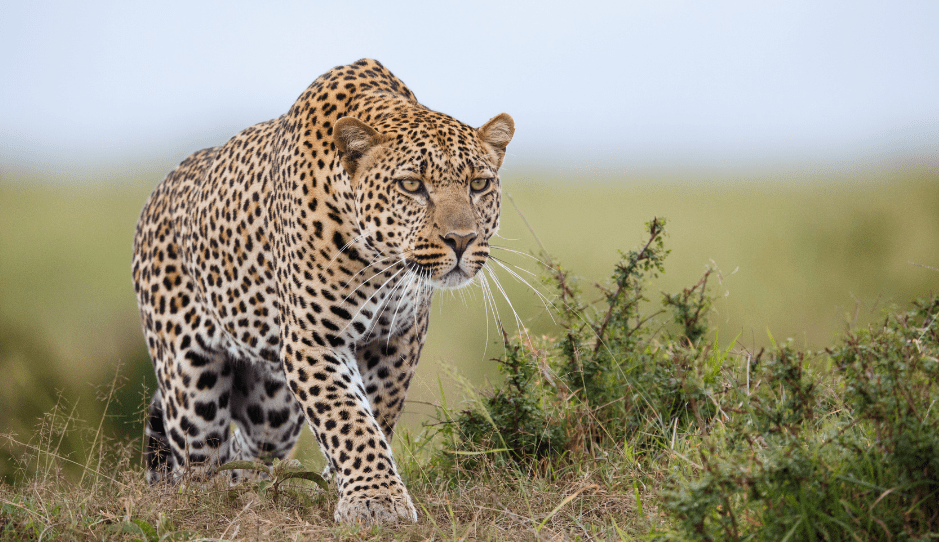 Their base color ranges from pale yellowish to dark golden, and they have a whiteish belly. They have a ringed tail that is tipped with white. Their spots fade towards the belly and the inside and lower parts of the leg. Those individuals living in arid regions are a paler yellow in color to those living in forests and mountains, who are much darker and deep golden.

Leopard’s fur is generally soft and thick, notably softer on the belly than on the back. The guard hairs protecting the basal hairs are short, around 3 to 4 mm (0.1 to 0.2 in) on the face and head, and increase in length toward the flanks and the belly to about 25 to 30 mm (1.0 to 1.2 in). In colder climates, their fur will grow longer.

These animals have retractable claws that they are able to draw into folds of skin on their paws to ensure that they are not blunted whilst they are walking about. These claws make them very good climbers. They have very good vision and hearing and these, together with their long and sensitive whiskers, give them the ability to hunt at night.

While leopards do have a similar appearance to the jaguar, a jaguar’s spots are darker and have smaller spots inside.

There are melanistic leopards and these, grouped with melanistic jaguars, are collectively known as black panthers. Melanism in leopards is caused by a recessive allele and inherited as a recessive trait. The black leopard is common foremost in tropical and subtropical moist forests. Pale and white leopards have also been seen in the wild. 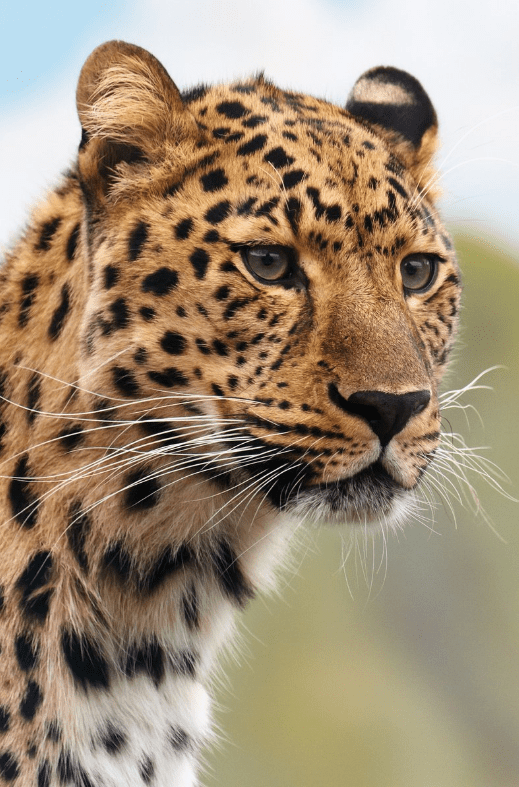 Leopards have a lifespan of between 10 and 12 years in the wild. In captivity, they have been known to live for up to 27 years.

Leopard cubs have a survival rate of only 41% to 50%. Lions, tigers, spotted hyenas and African wild dogs prey upon leopard cubs.

Leopards are carnivores and favor prey that is medium in size, with a body mass ranging from 10 to 40 kg (22 to 88 lb). It is thought males eat 3.5 kg (7 lb 11 oz) of prey daily, while females eat 2.8 kg (6 lb 3 oz). They have been recorded to eat over 100 species of animal, but the most common are ugulates, including small antelopes, gazelles, deer, pigs, primates and domestic livestock. However, they are opportunistic carnivores and will also eat birds, reptiles, rodents, arthropods, and carrion when available.

Leopards will scavenge food off cheetahs, solitary hyenas and other small carnivores, too, but will also eat much smaller prey to avoid intense competition for food from other large carnivores like tigers and hyenas, with which they share parts of their natural range.

These animals are very strong and have the ability to take prey that is much larger than themselves. They prey primarily at night and use their excellent vision and hearing to track down prey. The leopard will stalk its prey and tries to approach as closely as possible, typically within 5 m (16 ft), and, finally, will pounce on it and kill it by suffocation. It kills small prey with a bite to the back of the neck, but holds larger animals by the throat and strangles them.

They usually hunt on the ground, but have been observed to ambush prey by jumping down on it from trees.

Because leopards are so strong, they can drag their prey to safety, and will even drag carcasses heavier than themselves up into trees. It eats small prey immediately but will drag larger prey to trees, caves or bushes.

In very hot areas, leopards meet their water requirements by the bodily fluids of prey and succulent plants. These animals drink water every two to three days and feed infrequently on moisture-rich plants such as gemsbok cucumbers, watermelon and Kalahari sour grass.

They are territorial animals within the species, and they mark their territory with urine, feces, and claw marks. However, they often share their home range with many other animals, including big cats. Leopards will often hunt at different times to other big cats within the area, and will take smaller prey to avoid confrontation with these animals.

Leopards are mainly active from dusk till dawn, although in some areas are nocturnal, and rest for most of the day. They usually rest in thickets, among rocks or over tree branches. Over the course of one night, they can travel has far as 75 km (47 mi). They can run at over 58 km/h (36 mph), leap over 6 m (20 ft) horizontally, and jump up to 3 m (9.8 ft) vertically. This means they can climb trees very well. They are also comfortable in water and are adequate swimmers.

The leopard produces a number of vocalizations, including growls, snarls, meows and purrs. Cubs call their mother with a urr-urr sound. The whiteish spots on the back of leopards ears are thought to play a role in communication, too, although it is unsure what exactly for. 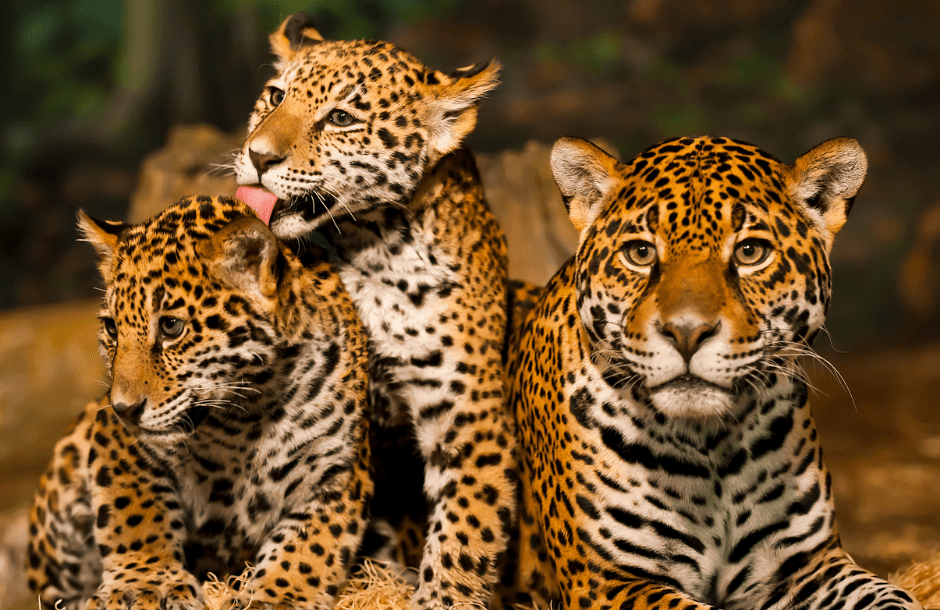 Leopards have no distinctive breeding season and females are able to reproduce every couple of months. Breeding usually peaks during the rainy season in May. In China and southern Siberia, leopards mainly breed in January and February.

Females have a 46 day long cycle and are in estrus for 7 days. Both males and females have multiple mates throughout their lifetime, with females attract potential mates by excreting pheromones in their urine. Females initiate mating by walking back and forth in front of a male and brushing up against him or swatting him with her tail.

The gestation period for leopards is 96 days, after which two to three cubs are born. Leopard cubs weigh less than 1 kg at birth, and their eyes remain closed for the first week. Mothers leave their cubs in the protection of dense bush, rock clefts, or hollow tree trunks for up to 36 hours while hunting and feeding.

Mothers move their den sites frequently, which helps prevent the cubs from falling prey to lions and other predators. The cubs learn to walk at 2 weeks of age and regularly leave the den at 6 to 8 weeks old, around which time they begin to eat solid food. Juveniles have woolly fur, and appear to be dark-colored due to the densely arranged spots.

The cubs are completely weaned by 3 months old and independent at just under 20 months old. Often, siblings maintain contact during the early years of independence.

Males usually do not have much to do with their partners or cubs after copulation, however on occasion they have been observed interacting.

Females usually give birth once every 15 to 24 months and stop reproducing around 8.5 years old. They reach sexual maturity at around 2.5 years old. 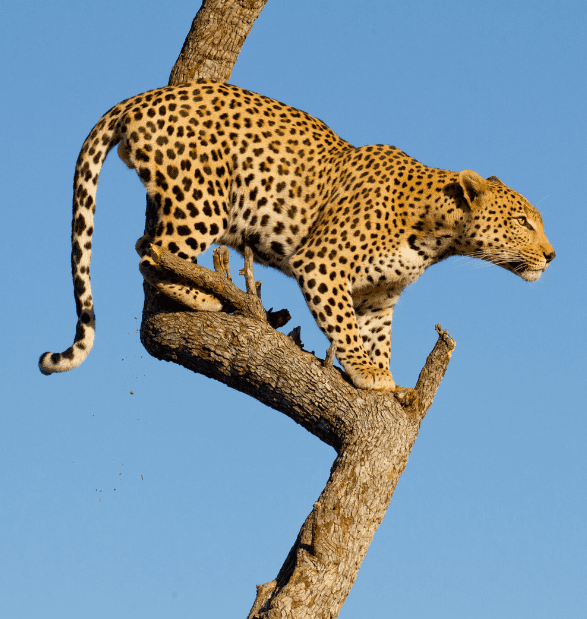 Leopards are the widest ranging of all the big cats and are found throughout sub-Saharan Africa, in some parts of Western and Central Asia, Southern Russia, and on the Indian subcontinent to Southeast and East Asia. The different subspecies of leopard are found in different areas, with the African leopard (the most widespread of all the subspecies) being native to most of sub-Saharan Africa.

These animals inhabit woodlands, grassland savannas, rainforests and forests, as well as mountainous, scrub, and desert habitats. Leopards can be found in many different areas, as long as there is a good source of cover and an ample supply of food.

Home range sizes vary depending on the habitat and the food available but those of male leopards are significantly larger than those of females. Female ranges often overlap the ranges of a number of both males and other females.

Leopards have actually been known to both live and hunt in areas close to urban activity, and have adapted to this as human activity has increased. It is thought that this is one of the primary reasons that the species is not yet critically endangered.

Leopards often inhabit the same areas as tigers, lions, cheetahs, spotted hyenas, striped hyenas, brown hyenas and wolves. Some of these animals steal the leopards kill and even kill leopard cubs. However, leopards retreat up a tree in the face of direct aggression and generally do not confront these animals.

Leopards are declining in parts of their geographic range due to habitat loss and fragmentation, and hunting for trade (Big five game) and pest control. As a result, leopards are listed as “Vulnerable” on the IUCN Red List of Threatened Species.

Humans are the biggest threat to leopards. Leopards are often captured for the pet trade and are targeted by trophy hunters as well. With the global population of humans growing, more and more of the leopard’s habitat is being lost. Despite this, leopards seem to be quite resilient to habitat disturbance and will tolerate the presence of humans.

Leopards are protected throughout most of their range in west Asia. While habitat reserves and national parks exist throughout their geographic range in Africa, a majority of leopards live outside these protected areas. They are extinct in many countries in which they used to live, and, despite being one of the big cats, 5 of 9 subspecies are listed as endangered or critically endangered.

Some leopards are kept in captivity. While they have longer lifespans and often breed well in captivity, it is extremely difficult to return a captive-bred big cat to the wild and this almost never happens.

Adult leopards are apex predators and therefore do not have many predators of their own. They are very well camouflaged in their environment thanks to their spots. Generally, the biggest natural threat to leopards are other leopards, although they have been known to be killed by occasional lions and tigers if they can get close enough. Typically, when an adult is killed, it is due to a territorial confrontation.

Leopard young, however, are susceptible to being preyed on, and have a survival rate of only 41% to 50%. They can be taken by hyenas, lions, tigers, snakes, jackals and birds of prey. This usually happens when their mother is off hunting for food and they cannot defend themselves.

Learn about other animals from Africa