You are here: Home / Animals / Lion

The Lion (Panthera leo) is a mammal of the family Felidae and is one of four ‘big cats’ in the genus Panthera.

The lion is the second largest cat, after the tiger. Lions are unique in that they are the only cats to live in groups (prides).

While once found throughout much of Africa, Asia and Europe, lions are presently encountered in the wild only in Africa and in the Gir Forest of India (where it is found only in the Sasan-Gir National Park). A lions main habitats are open woodlands, savannas, scrub country and grassy plains. 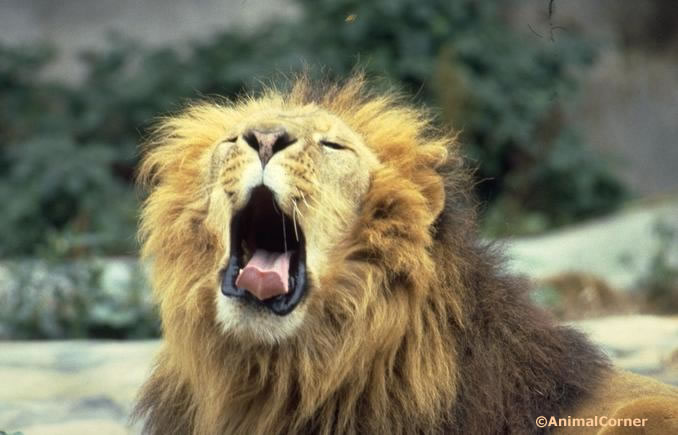 The male lion is also the only cat to have a mane, giving it a regal appearance that has earned him the title of ‘king of the beasts’. The mane of the male lion is one of the most distinctive characteristics of the species. It makes the lion appear larger, providing an excellent intimidation display. This helps the lion during confrontations with other lions and with the lions main competitor in Africa, the Spotted Hyena.

Male lions weigh between 150 – 225 kilograms (330 – 500 pounds) and female lions range between 120 – 150 kilograms (260 – 330 pounds). A lions tail length is 70 – 100 centimetres (2 feet 3 inches – 3 feet 3 inches). Their tail ends in a hairy tuft. The tuft conceals a spine, approximately 5 millimetres long, formed of the final sections of tail bone fused together. The lion is the only felid to have a tufted tail and the function of the tuft and spine are unknown. Absent at birth, the tuft develops around 5 months of age and is readily identifiable at 7 months. In the wild, lions live for around 10 – 14 years, while in captivity they can live over 20 years.

Lions are carnivores which means they eat meat.

In the wild: A lions prey usually consists of wildebeest, zebra and various ungulates (giraffes, buffalo and gazelles). Occasionally, lions will hunt young elephants, rhinoceros or hippopotamus. Lions also scavenge food, chasing away hyenas and other carnivores from their kills. Lions are known to be opportunist feeders and will also eat rodents, small birds, hares and reptiles.

A lion chasing its prey can run the length of a football pitch in six seconds. Lions eyes have a horizontal streak of nerve cells which watch their prey carefully across the plains.

At the zoo: A lions diet in zoos consists of commercially prepared feline food such as chickens, rabbits, mutton and horsemeat.

Lions are primarily nocturnal (active at night) or crepuscular (becoming active at twilight or before sunset). Lions spend much of their time resting, often up to 20 hours per day. Lions rest for lots of different reasons, including energy conservation, lack of prey and to avoid the heat of the day. 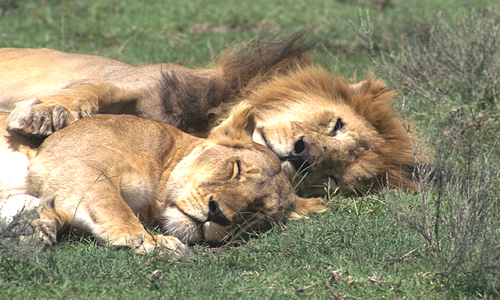 During periods of rest, lions have many opportunities for social behaviour. They gather and sleep in groups, rubbing their heads together and playing. All of these behaviours are good for reinforcing their social bonds.

Life in a group allows lions to hunt for food together. Female lions (lionesses) of a pride may spread out around potential prey to attack it from many directions. Generally, lions hunt by stalking, since they are not built for endurance running.

While hunting, lions usually give up a chase after 50 – 110 yards. Lions strangle or suffocate larger prey by clamping down on their neck to prevent it from breathing. A lion may place its paw over the nose, mouth or windpipe of prey. A lion easily captures smaller prey with a swipe from one of its massive paws.

Despite their tremendous power and adaptive efficiency, lions are more likely to fail than succeed in their attempts to kill.

Female lions can breed several times a year. However, an adult female lion will not produce her next litter until her cubs are about 2 years old. If the entire litter unfortunately dies, she will mate again soon after the death of the last lion cub.

The gestation period of a female lion is between 110 and 119 days. A litter of between 3 – 6 cubs is then produced. Cubs are usually born in a secluded nursery and introduced to the pride when they are 4 – 6 weeks old. 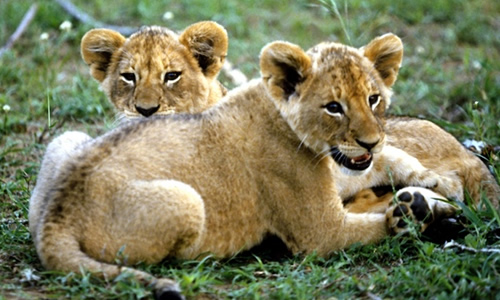 Lion cubs are very small at birth – weighing around 2 – 3 pounds. Lion cubs suckle until they are about 6 months old and begin eating meat at about 3 months of age. Female lions raise their young together and will suckle cubs other than their own.

New males to a pride may kill the new cubs so that the females will mate with them and produce their own cubs.

Young cubs begin to participate in pride kills at 11 months, although they probably could not survive on their own until approximately 30 months of age.

Lion infant deaths are very high, with fewer than 50% of newborn cubs surviving their first year of life. In the hierarchy of a lion pride, the male lions feed first, followed by the female lions and finally, the lion cubs. Since the pride may only kill an animal once every 3 to 5 days, it is clear why many cubs starve to death. However, it is more usual for cubs to survive when born into a pride, than to a lioness on her own.

The number of lions are rapidly decreasing there being estimates of between 16,000 and 30,000 living in the wild, down from an estimated 100,000 in the early 1990’s. The population is even more in jeopardy, because the remaining populations are often geographically isolated from each other, which causes inbreeding.