You are here: Home / Animals / Lizards 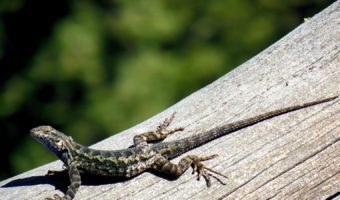 Lizards are small reptiles of the order Squamata, which they share with the snakes (Ophidians). Lizards are cold-blooded reptiles that have long tails and four legs.

There are about 2,700 species of lizard on our planet, with only two species being poisonous, the Beaded lizard and the Gila Monster, (pictured left), both from Mexico.

However, recent research has revealed that in fact many lizards in the iguanians and monitor (lizard) families have venom-producing glands. None of these pose much danger to humans, as their poison is introduced slowly by chewing, rather than injected as with venomous snakes.

Lizards have a slimy appearance, but they are actually dry. Some lizards such as the Glass Lizard (pictured left) have no functional arms and like many lizards, their tails will break off as a defence mechanism.

While the predator eats the lizards tail, the lizard escapes and its tail will eventually re-grow. Many lizards are also capable of the regeneration of lost limbs meaning that if the lizard loses a limb through conflict with a predator, it will grow back just like their tails.

Many species of lizard change color in response to environmental changes or stress. One of the most well known lizards of this feature is the Chameleon Lizard. These lizards have special cells that lie in layers underneath their transparent skins. The layers contain color pigments that influence the color of the Chameleon.

Another lizard species capable of color change are the Anoles, a family of lizards closely related to iguanas. Anoles also change color in response to surroundings and mood. There are about 300 species of Anoles and they all have different coloring and color transitions. Anoles are small and common lizards that can be found throughout the southeastern United States, the Caribbean and various other regions of the Western world. A large majority of them sport a green coloration, including the only species native to North America, the aptly named Green anole.

The green anole can change its color from a bright, leafy green to a dull brown color, while the Cuban brown species can only change its shade of brown, along with the patterns on its back.

Lizards live all over our planet except the polar regions as it is too cold for them to survive. Most live in trees such as the frilled lizard. Some live on the ground. Only a few live in the water like the great marine iguana. Lizards, like most reptiles have to regulate their own body temperature and will bask in the sun to warm up and move to a shade to cool down.

Lizards typically feed on insects, birds or rodents. A few species are omnivorous or herbivorous. One familiar example of a herbivorous lizard is the iguana, which is unable to properly digest animal protein. Most lizards eat insects (they are insectivores).

Most lizards lay eggs, though a few species are capable of live birth such as the Slow Worm, a legless lizard that resembles a small snake. Slow Worms reproduce from eggs which the female incubates within her body. The incubation period is about 90 to 100 days. In smaller egg laying lizards, female lizards around lay 8 – 12 soft-shelled eggs in a clutch (a set of eggs laid at one time).

Some lizards such as the Komodo Dragon digs a hole in the ground and lays 20 – 40 eggs. It then covers them up with dirt. The eggs hatch in about 7 months. Hatchlings eat mostly insects and live in trees.

Chameleons lay white, oval, tough-skinned eggs, which are buried in warm sand until they hatch.