You are here: Home / Animals / Llama 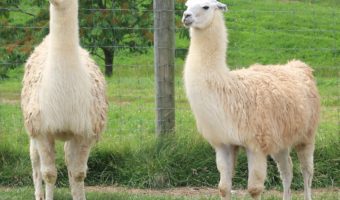 The term Llama is sometimes used more broadly, to indicate any of the four closely related animals that make up the South American branch of the family Camelidae: the true llama, the vicuña, alpaca and guanaco.

Differentiating characteristics between llamas and alpacas are that llamas are larger and have more elongated heads. Alpacas also have a more luxurious wool than llamas. The most apparent visual difference between llamas and camels is that camels have a hump or humps and llamas do not.

Llamas were used as a pack animal by the Incas and other natives of the Andes mountains. In South America llamas are still used for beasts of burden, fibre production and meat.

Llama ears are rather long and slightly curved inward, characteristically known as banana shaped. There is no dorsal hump. Feet are narrow, the toes being more separated than in the camels, each having a distinct plantar pad. Their tail is short and their fibre is long, woolly and soft.

Below are the general characteristics of a llama:

The Llama is a very intelligent animal and very easy to train. In just one to five repetitions they will learn and remember many skills. Llamas can be trained to do lots of things such as accept a halter, being led on a lead and they can be trained to get in and out of a vehicle, and they can also be trained to pull a cart or carry a pack. Llamas are very sociable animals but they do need the companionship of their own kind.

Llamas are a very gentle, shy and a very curious animal. Llamas are calm in nature and have common sense, which make them easy for anyone, even children to handle. Llamas are very enjoyable animals and they are fun to do things with, however, most llamas do not seek affection and they prefer not to be handled excessively.

Llamas communicate with each other by ear position, body language, spitting and humming.

Llamas usually only spit at other llamas to establish dominance and do not spit at people. The habit of spitting is a defence mechanism. However, usually, a llama would prefer to run away than to confront their assumed aggressor, and is not always a frequent occurrence. That is believed to be due in part to their shy disposition.

The sound of the llama making groaning noises or going ‘mwa’ is often a sign of fear or anger. If a llama is agitated, he will lay his ears back. One may determine how agitated the llama is by the materials in the spit. The more irritated the llama is, the further back into each of the three stomach compartments it will try to draw materials from, for its spit.

When correctly reared spitting at a human is a rare thing. Llamas are very social herd animals, however, and do sometimes spit at each other as a way of disciplining lower-ranked llamas in the herd. A llamas social rank in a herd is never static. Llamas can always move up or down in the social ladder by picking small fights. This is usually done between males to see who becomes alpha.

Llama fights are visually dramatic with spitting, ramming each other with their chests, neck wrestling and kicking, mainly to knock the other off balance. The female llamas are usually only seen spitting as a means of controlling other herd members.

When female llamas are 12 to 18 months of age they are ready for their first breeding. The male llama reaches his sexual maturity approximately 18 to 24 months of age. Llamas do not have a heat cycle, however, they are induced ovulators. Llamas can be bred any time of the year. Fifty days is the average gestation time.

A single baby, called a ‘cria’ is normally born without assistance. Crias are born in the daylight hours from a standing position and is usually up and nursing in about 90 minutes. The average birth weight of a cria is around 18 to 35 pounds. Rarely do twins occur. The weaning time for the cria is usually 5 months old, depending on the overall health.

Llamas being herd animals communicate with a variety of sounds.

This sounds similar to a person humming and is the main method of communcation. Llamas hum, unlike humans, when they are tired, distraught, curious or worried. Mothers may also hum to greet their new baby. The humming sound is used for many different reasons. Hold your mouse on the picture to listen to a Llama humming sound.

This sounds like a person clicking their tongue from the roof of their mouth to the bottom of their mouth. Llamas often hold back their ears when they do this and seem to do this when greeting new llamas or flirting with the female llamas.

This sounds like a person gargling. This sound is made by the male when approaching a female for breeding and will continue until the copulation is complete, which can be anywhere from 20 minutes to an hour.

This call is made when the llama is feeling threatened or startled by something . It is a loud, high pitched rhythmic sound. Being herd animals, this call is used to alert the others in the herd when one spies a predator.